Gautam Adani’s debt-fueled empire received a jolt this week when the Economic Times reported that three of the six Mauritius-based funds that have invested most of their money in the Indian billionaire’s stocks had seen their accounts frozen by the national share depository.

The Adani Group refuted the report as “blatantly erroneous,” helping to put a floor below plunging share prices. But not before $6 billion of wealth was lost on Monday. The jitters returned the next day with an announcement that the accounts for Cresta Fund Ltd., Albula Investment Fund Ltd. and APMS Investment Fund Ltd. are in “suspended for debit” status as per a Securities and Exchange Board of India regulation. Adani Total Gas Ltd., Adani Power Ltd. and Adani Transmission Ltd. all fell by their 5% daily limit in Mumbai on Tuesday.

The selling continued on Wednesday.

A temporary bout of nervousness in the stock market won’t shake Asia’s second-richest man, who has managed to sustain — without any visibility on future profit — a decade-long entanglement in a controversial and costly coal mine investment in Australia. Behind that confidence lies the workhorse of the group. Adani Ports & Special Economic Zone Ltd. is spewing $1 billion of cash annually, a nine-fold jump from 2014.

The coming together of the different pieces in Adani’s sprawling infrastructure jigsaw has mirrored the rise of Narendra Modi, the long-time chief minister of Gujarat — Adani’s home state — who has been India’s prime minister for the last seven years. All that the businessman needs to make his bets pay off is a decade-long dream run in which India goes from lower-middle-income economy to higher-middle-income nation.

That jump in per capita income may have been delayed even before Covid-19. Still, when the growth spurt eventually comes, it should trigger a hunger for commodities similar to what China witnessed between 2006 and 2016. By supplying electricity to 1.4 billion Indians when they’re sleeping, providing them with piped gas when they’re sitting down for breakfast, and hosting their data when they’re browsing the Internet and waiting for a flight to take off from one of his airports, Adani will collect the cash that will justify the estimated $20 billion debt in the group’s listed companies. 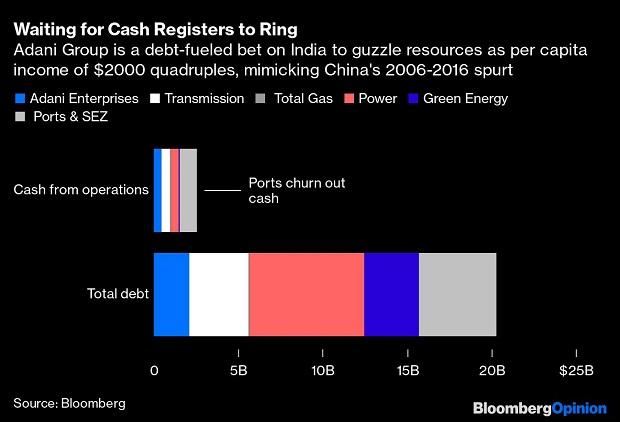 That’s why the turbulence this week isn’t entirely without significance. In case of lingering damage to investor confidence, the conglomerate may need to taper its breathless expansion, lest financiers turn skittish as well. And that won’t do for Adani.

In less than three decades, his low-key trading firm has transformed itself into a massive owner of energy and transport assets in a country that doesn’t have enough of them. Now the businessman wants to expand into cement manufacturing, presumably making use of the fly ash produced by his power plants. An initial public offering for the airport business may also be on the cards.

It would be a typical move. To grab the capital-guzzling opportunities that have come its way, the original firm, Adani Enterprises Ltd., has spun off several units into the public market. But the list of shareholders of these stocks, which have risen 200% to 900% in value in the past year, need some explaining. Take Adani Green Energy Ltd., which wants to be the world’s largest renewable energy producer by 2030. Earlier this year, the firm sold a 20% stake to Total SE. That’s a solid name. As are Vanguard Group Inc. and Blackrock Inc. which have small shares.

Sandwiched between them, however, are the likes of Elara India Opportunities Fund. The $4 billion investment vehicle seems to have found most of its opportunities in Adani group shares. Look beyond the 97% of the fund’s assets that are parked in five of them, and it doesn’t hold even a $1 million stake in what other fund managers would typically buy in India — for example, a major bank, a top-tier software exporter, or Reliance Industries Ltd., the country’s largest company by market value. 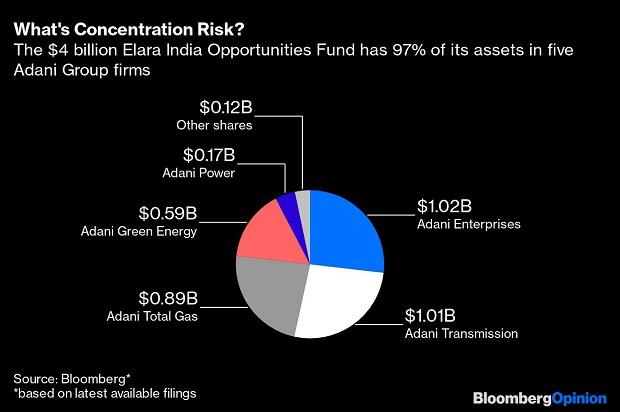 In an interview with CNBC yesterday, Jugeshinder Singh, the chief financial officer of Adani Group, said that more high-quality institutions will come as the firms establish a longer track record in public markets. He also argued that the questions that are being asked of him about obscure fund managers should ideally be answered by the investors themselves. Trouble is, where do we find them? I could have asked analysts, but I couldn’t find a single one who covers the Adani Green stock the market values at $25 billion.

The Adani juggernaut will roll on. However, as the group gets bigger — and more covetous of cash-generating assets — it would need larger dollops of outside equity. It would be helpful if it comes from investors who at least have a website.