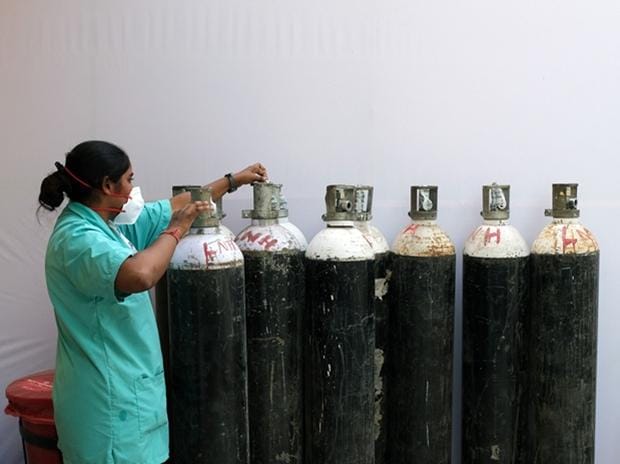 A deadly second wave of the Covid-19 pandemic has made India the second-worst hit country. (Photo: Bloomberg)

Nationalistic pride may swell chests, but to fill lungs you need air.

Someone should tell that to the Indian government. The country that boasted of being the world’s pharmacy in March discovers a month later that not only are “Made in India” vaccines in short supply, but also that it didn’t have enough oxygen in hospitals to deal with a deadly second wave of the Covid-19 pandemic that has made it the second-worst hit country, after the U.S.

New Delhi floated a tender last October, eight months into the pandemic, to set up oxygen plants in district hospitals. But an investigation by the website Scroll.in showed that in some instances the vendor that won the contracts never showed up to fulfil them. In other cases, hospitals didn’t provide the needed land, or state administrations didn’t come up with the copper wiring and electricity connections. Sheer apathy railroaded a 2 billion rupee ($27 million) project. Not a good look for a country that wants to spend $1.5 trillion on infrastructure in five years.

The result is that hundreds of millions of people risk not having access to a basic, life-saving element as an overwrought bureaucracy struggles to cope with nearly 300,000 new daily cases, which modelers believe to be a highly underreported figure. Meanwhile, the country’s overall medical oxygen requirement has shot up by more than 9 million cubic meters, according to an interactive Covid-19 Oxygen Needs Tracker.

In my home state alone, more than 230 million people have been put in greater danger than they needed to be. If Uttar Pradesh were a country, it would be the world’s fifth most-populous. For many among my family, friends and acquaintances, the risk of running out of breath is real. After an interminable wait for an oxygenated hospital bed, Vinay Srivastava, a 65-year-old journalist and coronavirus patient in the state capital, Lucknow, took to social media Friday to plead for help. By that time, his blood oxygen level had fallen to 52%. Saturation below 90% is considered low.

“No hospital, lab, doctor is picking up the phone,” he tweeted in Hindi. On Saturday afternoon, Srivastava put up a picture showing a finger-pulse oximeter reading of 31%. Then he died.

This was no isolated incident, or sadly even new. In 2017, 63 children battling neo-natal and pediatric encephalitis died in less than one week in a hospital in Gorakhpur, in eastern Uttar Pradesh. Hypoxemia, or acute shortage of oxygen, was the most likely cause.

That tragedy should have triggered an alarm over the oxygen crisis in India’s hospitals. Another one should have come from Italy’s struggle with oxygen supplies at the peak of its infections early last year. But the government missed that chance.

A day after journalist Srivastava’s death, the federal health ministry said that only 33 out of a planned 162 plants had been installed, and a total of 80 will be ready by the end of next month. That’s already far too late. In Uttar Pradesh, which has so far received only one of the new onsite plants, rich and poor alike are scouring the web for answers to questions like, “What is the normal oxygen rate for the human body?”

The breathlessness is by no means restricted to Uttar Pradesh. On Tuesday, the Delhi High Court ordered the government to urgently divert oxygen supplies from the steel and petrochemical industries after noting that some of the main Covid-19 hospitals in the national capital would run out in about four to eight hours. If the uncontrolled spread of the virus results in “extended lockdown and closures, the purpose of full production of steel and petroleum products would be of no avail, as their consumption is bound to fall in that scenario,” the judges noted. 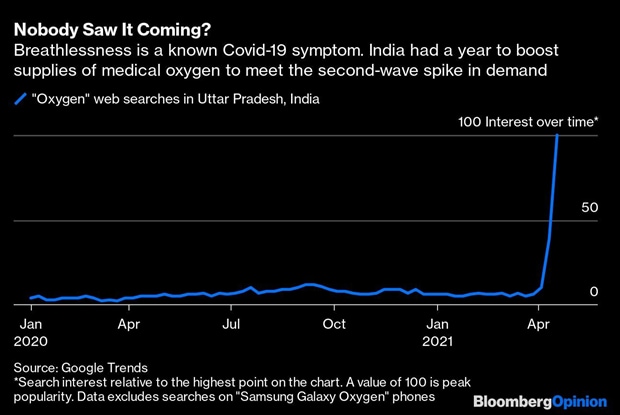 The second wave has already deflated hopes of a V-shaped economic recovery. A 10th of the gross domestic product that would have come about in the absence of the pandemic is perhaps permanently lost. To be deprived of oxygen would further affect operations such as welding, cutting, cleaning and chemical processes, according to Crisil, an affiliate of S&P Global Inc. Meanwhile, the demand side of the equation is weakening, partly because of localized social-distancing restrictions and partly because of fear.

By mid-April, retail and recreation activity in Lucknow had plunged 54% from the pre-virus baseline, according to Google Mobility. Its analysis of cellular phone locations shows an even grimmer picture for Mumbai, the commercial capital: Public transport use is down by 61%.

From rerouting industrial oxygen to running a special train for transporting it across the country, everything being done now should have been planned earlier. India reported 2,000 Covid-19 deaths on Wednesday--perhaps only a fraction of the actual fatalities. The second wave need not have been this lethal, if people could breathe a little easier.

(The views expressed are personal.)