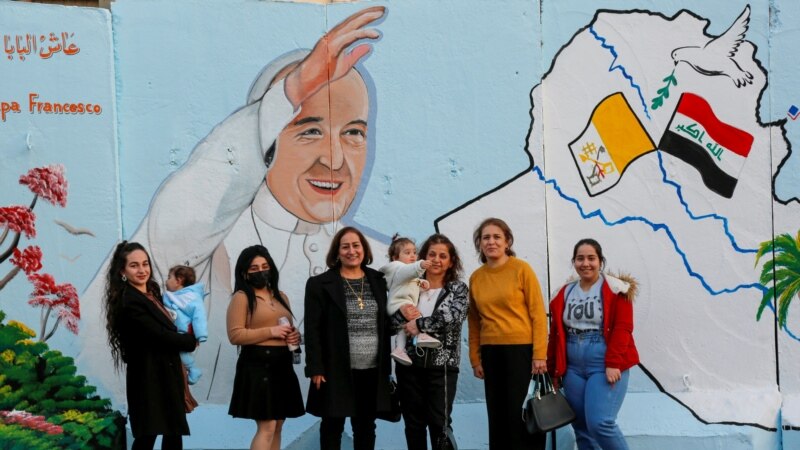 Pope Francis begins a four-day visit to Iraq on March 5, saying on the eve of the trip that he is coming as a “pilgrim of peace” to the war-ravaged, Muslim-majority nation.

The 84-year-old pontiff said in a video message released on March 4 that he would offer his hand to “brothers and sisters of other religions” while also highlighting the heavy price paid by Iraq’s Christian communities over past decades.

“I long to meet you, to see your faces, to visit your land, ancient and extraordinary cradle of civilization,” the pope told the Iraqi people.

“I come as a pilgrim, a penitent pilgrim to implore forgiveness and reconciliation from the Lord after years of war and terrorism.”

He said he comes as “a pilgrim of peace in search of fraternity, animated by the desire to pray together and to walk together, also with the brothers and sisters of other religions.”

The visit will mark the first foreign trip by the pope since the outbreak of the coronavirus pandemic a year ago.

He is scheduled to take part in a series of events through March 8.

Prior to his arrival, welcome banners were seen in the capital, Baghdad, and in the Shi’ite holy city of Najaf emblazoned with his image and the title “Baba al-Vatican” in Arabic.

Roads are being paved and churches renovated along the scheduled path of the pontiff, many in ruined Christian villages.

Iraq’s estimated 300,000-member Christian community is one of the oldest and most diverse in the world. Chaldeans and other Catholics make up about half, along with Armenian Orthodox, Protestants, and others.

The number is down from some 1.5 million at its peak before the fall of dictator Saddam Hussein in 2003. The community has been subject to persecution and attacks by extremist groups, including Islamic State, forcing hundreds of thousands to flee the country.

Francis is slated to hold an extraordinary one-on-one meeting with Grand Ayatollah Ali al-Sistani, the reclusive cleric and a leading religious authority for many of the world’s Shi’ite Muslims.

Iraqi Foreign Minister Fuad Hussein called the pope’s visit ” a message of peace, coexistence, and tolerance. Our country and our region need this message.”

The pope’s visit comes at a time of a rampaging coronavirus epidemic and an upsurge in violence in Iraq as the Western-backed Baghdad government struggles against extremist violence.

Baghdad also has close ties with neighboring Iran, which carries much influence with many of Iraq’s Shi’ite population.

Because of coronavirus restrictions, crowds at the pope’s events will be strictly limited, and the pontiff will travel mostly in his armored car.

Iraq is deploying thousands of extra security personnel to protect the pontiff during his visit, which comes after a spate of rocket and suicide bomb attacks that have raised concerns over the Catholic leader’s safety.

With reporting by AFP, AP, and Reuters