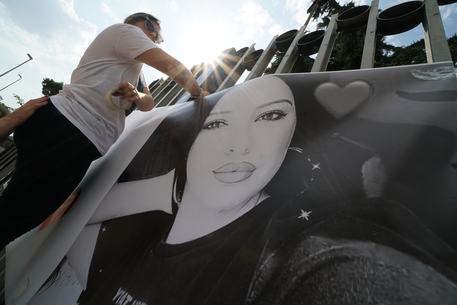 (ANSA) – ROME, SEP 15 – The transgender partner of Maria
Paola Gaglione, a young woman killed in a crash allegedly caused
by the victim’s brother because he opposed the relationship, got
his wish to say a final farewell to her on Tuesday.

Ciro Migliore was accompanied by police to visit the body of his
22-year-old partner before her funeral in the town of Caivano,
in the province of Naples”.

The woman’s 25-year-old brother, Michele Antonio Gaglione, is in
jail and is accused of manslaughter for allegedly causing her
death by ramming the scooter which she was riding on with
Migliore.

“We were running alone towards our freedom, or at least we
though we were, towards our great happiness,” read a poster with
a message of goodbye from Migliore.

“Wherever you are, my heart will be with you”.

Gaglione’s parents have said their daughter died in a simple
accident and there was no intention to do harm.

Migliore’s mother said this was not true. “Michele, his mother
and his father must pay. All three of them,” she said on Monday.

“It’s not true that it was just an accident”.

Daniela Falanga, the head of the Naples branch of the LGBT
association, does not think it was just an accident either.

“I spoke to Ciro… the two youngsters had repeatedly had death
threats,”Falanga said. “In a way, they were expecting what
happened”
Michele Antonio Gaglione admitted to chasing the couple on his
motorbike but denied deliberately causing the accident, his
lawyer, Domenico Paolella, said after a hearing with a
preliminary investigations judge Monday.

“He explained to the judge that the family had lost trace of
Maria Paola for several weeks,” Paolella said.

“She packed her bags and went.

“When Antonio saw her in the seat of a scooter, he followed with
his motorbike to ask her to come back home, to talk, to get her
to reason.

“She went without giving any explanations and the whole family
was devastated”. (ANSA).