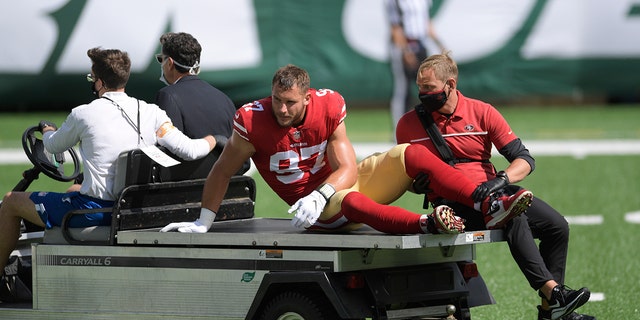 The San Francisco 49ers are taking “adding insult to injury” to a whole new level after dominating the New York Jets on Sunday.

The Niners’ Week 2 win felt like anything but a victory after the team sustained a number of notable injuries that included quarterback Jimmy Garoppolo, Nick Bosa, Raheem Mostert and Solomon Thomas.

But teammate Arik Armstead believes that the playing conditions at MetLife Stadium were to blame and coach Kyle Shanahan seemed to agree.

“Fix this trash met life turf,” Armstead wrote in a tweet directed at the NFL. “2020 is so wack.”

Shanahan spoke to reporters following the Niners’ 31-13 win over the Jets and said that he and the team discussed how “sticky” the turf was during that game and noted that “unfortunately” they will have to play there again next week when they take on the New York Giants.

Several 49ers players told ESPN that they are “afraid and anxious” for Sunday’s game.

San Francisco 49ers defensive end Nick Bosa is carted off the field after being injured during the first half of an NFL football game against the New York Jets, Sunday, Sept. 20, 2020, in East Rutherford, N.J. (AP Photo/Bill Kostroun)

As for the Jets, who also saw a number of injuries on Sunday, a source told ProFootballTalk, “We were too busy getting our faces kicked in to worry about the turf.”

CLICK HERE TO GET MORE SPORTS COVERAGE ON FOXNEWS.COM

A league source also confirmed that the NFL’s field operations department will vet San Francisco’s concerns about the turf.