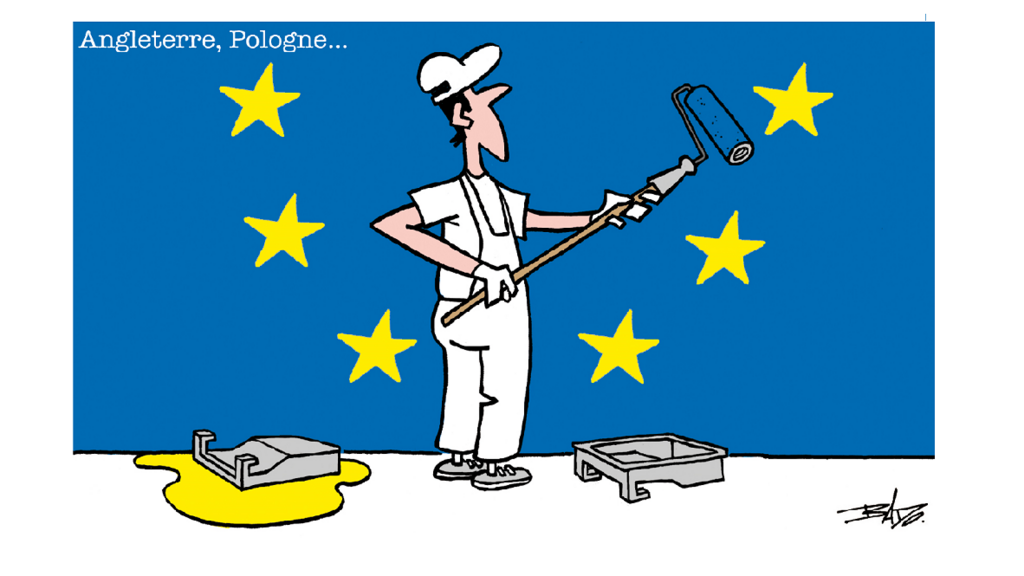 As tensions mount between Brussels and Warsaw over a ruling that parts of European treaties are incompatible with the Polish constitution, the Quebec cartoonist Bado made a drawing about the possibility of “Polexit”.

Bado’s cartoon displays a painter preparing to cover up another star on the EU flag, with Poland following the UK out the door.

The EU and Poland have been at odds with for several years over judicial reforms enacted by the ruling party Law and Justice (PiS). Warsaw says these changes are a necessary corrective to longstanding progressive, metropolitan bias in a judicial system that does not reflect the values of many Polish voters. Brussels says PiS is undermining judicial independence and politicising the Polish legal system – contravening EU laws Poland signed up to.

The Polish Constitutional Court ignited further tensions on October 7 when it ruled that some articles of EU treaties are incompatible with the Polish constitution. Warsaw hailed this ruling as paving the way to bring more powers from Brussels back to the Polish people – making much of the German Constitutional Court’s ruling in May 2021 that the European Central Bank’s bond-buying programme infringed on the German constitution. For Brussels, the Polish court’s ruling was an attack on the operations of the EU and the rules-based order from which all of its member states benefit.

In this context, Bado’s cartoon asks if Polexit will follow Brexit.

Cartoonist for the daily newspaper Le Droit in Ottawa since 1981, Guy Badeaux, better known as Bado, won the Canadian National Newspaper Award in 1991. He also edited Portfolio: The Year’s Best Canadian Editorial Cartoons for 22 years since its creation in 1985.

Cartooning for Peace is an international network of cartoonists committed to promoting freedom of expression, human rights and mutual respect between people of different cultures and beliefs through the universality of press cartoons.