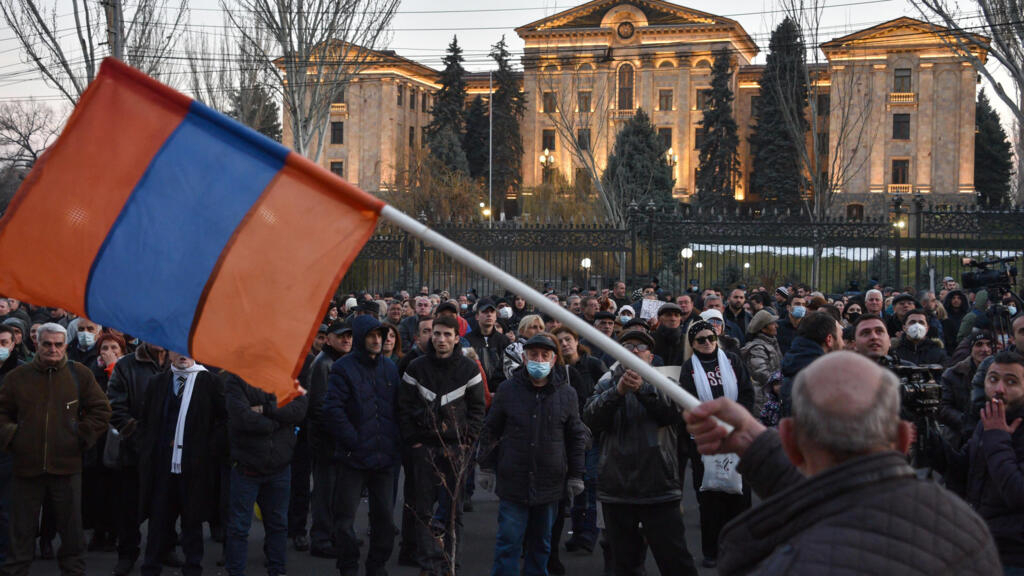 The move came as several thousand opposition protesters took to the streets of Armenia‘s capital Yerevan for the third day running to call for the resignation of Prime Minister Nikol Pashinyan.

They want him to go over his handling of last year’s war with Azerbaijan, which many see as a national humiliation.

The fresh protests, which have continued on and off since the fighting ended in November, erupted Thursday when Pashinyan defied a call by the military to resign and accused the army of an attempted coup.

He also ordered the chief of the general staff Onik Gasparyan to be fired — but on Saturday, Armenian President Sarkisian, whose role is largely ceremonial, said in a statement that he would not back the move.

“The president of the republic, within the framework of his constitutional powers, returned the draft decree with objections,” the presidency said.

The political crisis “cannot be resolved through frequent personnel changes”, the statement added.

The leadership of the small South Caucasus nation appeared to be at an impasse.

Soon after the announcement, Pashinyan wrote on Facebook that he would send the order to the presidency once more, saying its decision had not defused the crisis “at all”.

Meanwhile, several thousand opposition protesters marched through central Yerevan, calling for the prime minister’s resignation. Many more leaned out of windows and balconies along the way to cheer them on.

By 7:30 pm (1530 GMT) the procession arrived at the parliament building, where some protesters have set up camp, an AFP correspondent reported.

Roughly 5,000 demonstrators gathered there for a rally earlier in the day, urging lawmakers to take action.

“Pashinyan must leave for the sake of our state because his position is very weak today. Nobody takes him seriously,” Vera Simonyan, a 28-year-old IT specialist, told AFP at the rally.

Former premier Vazgen Manukyan, who has been named by the opposition to replace Pashinyan, told the crowd that he expected the political crisis to be “resolved within two to three days”.

He added: “Today Pashinyan has no support. I call on the security services and the police to join the army, to support the army.”

Pashinyan has faced fierce criticism since he signed a Moscow-brokered peace deal over Nagorno-Karabakh, an ethnic Armenian region that broke from Azerbaijan’s control during a war in the early 1990s.

After six weeks of clashes and bombardments that claimed around 6,000 lives, a ceasefire agreement was signed that handed over significant territory to Azerbaijan and allowed for the deployment of Russian peacekeepers.

The agreement was seen as a national humiliation for many in ex-Soviet Armenia, but Pashinyan has said he had no choice but to agree or see his country’s forces suffer even bigger losses.

“He must be responsible for the defeat in the war, for the signing of a humiliating agreement,” 53-year-old locksmith Arut Zakaryan told AFP at Saturday’s rally.

For months Pashinyan had weathered the crisis with the backing of Armenia’s military, but on Thursday it too joined the calls for him to step down.

The military’s general staff said in a statement that the prime minister and his cabinet were “not capable of taking adequate decisions”.