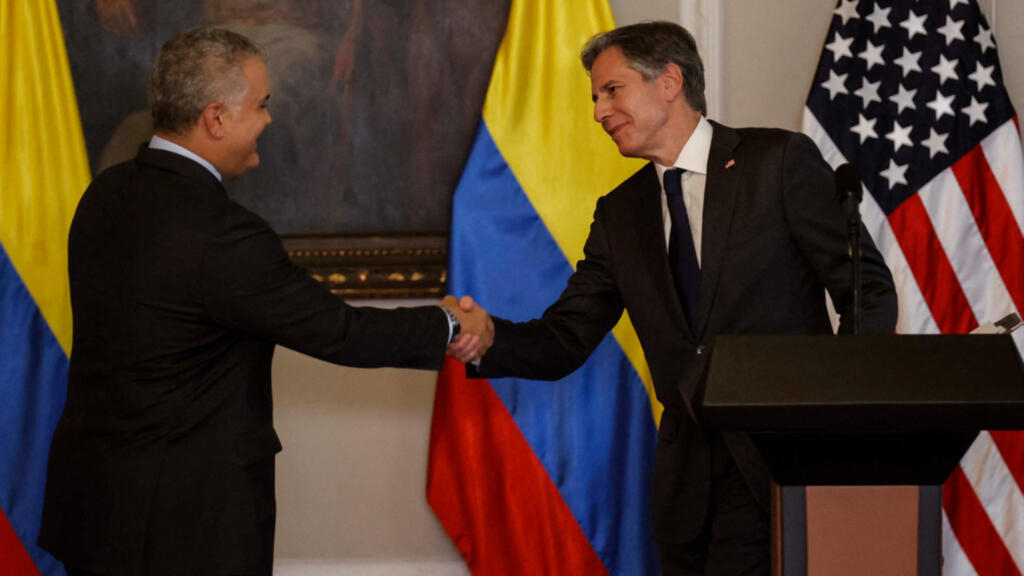 US Secretary of State Antony Blinken on Wednesday praised Colombia’s right-wing leader as a key partner on core concerns including migration as he sought to shift away from the military focus of US alliances in Latin America.

President Ivan Duque, who was closely aligned with former US leader Donald Trump, took pains on a visit by Blinken to embrace the current administration’s agenda – pledging work on climate change, migration and even repeatedly using President Joe Biden‘s “Build Back Better” slogan.

Duque has faced heated criticism after police gunned down dozens during this year’s nationwide protests sparked by tax reforms, with some lawmakers of Biden’s Democratic Party urging a suspension of security assistance.

Blinken said he spoke to Duque about accountability, saying, “Ending impunity as we know it is also one of the best ways to prevent rights abuses going forward.”

But Blinken called Duque “a very valued friend of the United States” and largely defended his track record.

Blinken pointed to homicide charges filed against two officers so far and explained how Duque told him that police will now be identifiable by barcodes on their uniforms.

Duque said that investigations were under way and there would be “severe punishment” over rights abuses – but also said that his own efforts have succeeded in improving security in a country previously notorious for drug-related crime.

“Also, we have said that there has to be zero tolerance with any conduct of violence, vandalism and obviously the attacks and killings of members of the police. Human rights are for everyone,” Duque told a joint news conference.

Blinken is on a visit to Colombia and Ecuador, another conservative-led country, as he seeks to highlight democracy in Latin America at a time of growing inroads by China.

Colombia for decades has been a top recipient of US military assistance, including in its decade-long campaign against FARC rebels.

In a speech in Quito earlier Wednesday, Blinken said that the US record on security assistance in Latin America has been “mixed”.

“That’s because often we tried to fix the problem by relying too much on training and equipping security forces, and too little on the other tools in our kit,” he said at the Universidad San Francisco de Quito, with the green Andean foothills behind him.

“We focused too much on addressing the symptoms of organised crime, like homicides and drug trafficking, and too little on the root causes. We’re working to correct that imbalance.”

He acknowledged the long shadow of US support for dictators, saying, “There were times when we supported governments in the Americas that did not reflect the choice or the will of their people and did not respect their human rights.”

After a day with Duque at the Casa de Narino presidential residence, Blinken joined talks with ministers from across the Americas on migration – an issue that has deeply affected Colombia.

A growing number of Haitians, desperate to escape a country that has been hit by successive disasters, have been seeking to cross Colombia for a dangerous trek toward the United States – which has drawn controversy with harsh tactics to turn them away.

Colombia is already home to 1.3 million migrants from nearby Venezuela, whose economy has been in freefall under leftist strongman Nicolas Maduro – a bitter foe of Duque, who on Wednesday again denounced the “ignominious, corrupt, drug-trafficking dictatorship”.

Maduro also advocated Wednesday for the “normalisation” of trade and diplomatic relations with Colombia, which have been nonexistent since 2019 when the government refused to recognise him as Venezuela’s leader.

“Colombia and Venezuela have to solve our problems in peace, we have to … normalise commercial, productive, economic relations,” Maduro said in a speech on state television. “We have to normalise consular relations, diplomatic relations.”

The leftist leader welcomed a proposal approved Tuesday by Colombia’s Senate to create a federal commission between the two countries to work on normalising commercial and diplomatic ties.

But Maduro also said that Colombians in Venezuela do not have consular assistance because President Ivan Duque’s government “does not give them consular access”.

Blinken said the United States was committed to helping Colombia and other nations accommodate refugees. Duque noted that far more is spent on each Syrian refugee than Venezuelans.

“The United States does a lot already, but I think there should be shared responsibility even beyond this hemisphere as we see in other parts of the world,” Blinken said.