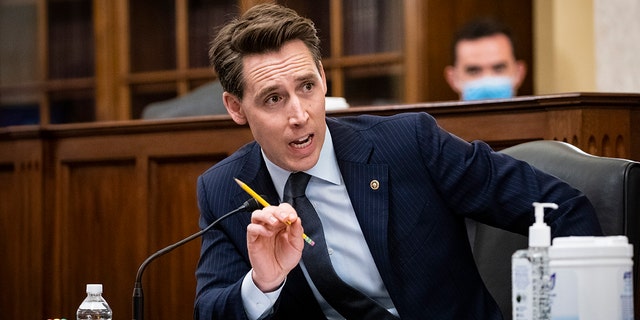 Twitter has not provided any additional context to tweets showing screenshots of the voter intimidation emails sent to Democrats in battleground states that were part of an Iranian influence campaign, according to the FBI’s Wednesday findings.

“Yet again, Twitter has applied entirely different standards based on whether posts would help or harm Democratic candidates,” Hawley, a staunch critic of Big Tech, said in a statement to Fox News. “Here, Twitter’s anti-conservative bias directly facilitates election interference by foreign adversaries. I look forward to probing these issues with Jack Dorsey.”

Twitter did not respond to multiple inquiries from Fox News.

Director of National Intelligence John Ratcliffe and FBI Director Christopher Wray on Wednesday connected an Iranian influence campaign to a flurry of voter intimidation emails sent to voters in Pennsylvania, Florida and Arizona. The emails falsely claimed to be from the far-right “Proud Boys” group, which the Proud Boys chairman denied, according to The Washington Post, and the FBI’s findings supported his statement.

On Twitter, however, users are sharing screenshots of at least one Iranian intimidation email without the context that it was part of a foreign influence campaign.

The website also adds fact-check labels to posts it deems misleading and has added such labels to a number of President Trump’s tweets about COVID-19 and mail-in ballot fraud.

“If we determine a Tweet contains misleading or disputed information that could lead to harm, we may add a label to the content to provide context,” a page on Twitter’s Help Center reads.

Twitter announced in an Oct. 9 blog post that it may mark certain tweets with a “misleading information” label that reads, “This is disputed,” before users retweet content, but Twitter has not labeled the Iranian emails in question.

“We have also taken action on Tweets sharing media regarding elections and political issues with misleading or incorrect party affiliation information. We continue to partner closely with the RNC, DNC, and state election institutions to improve how we handle these issues,” the blog post reads.

It continues: “Twitter has a critical role to play in protecting the integrity of the election conversation, and we encourage candidates, campaigns, news outlets and voters to use Twitter respectfully and to recognize our collective responsibility to the electorate to guarantee a safe, fair and legitimate democratic process this November.”