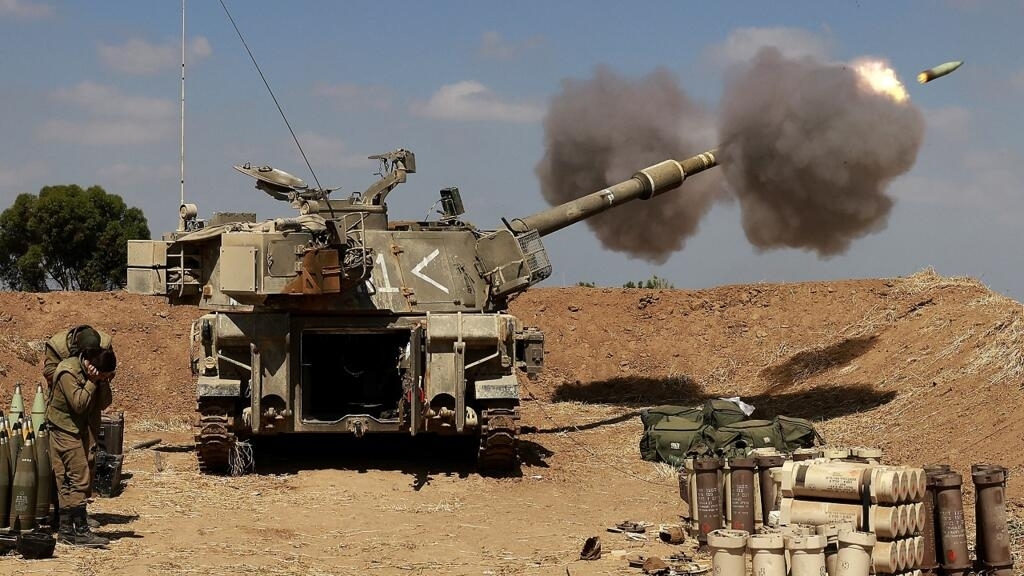 Israeli troops massed at the Gaza border on Thursday as military officials said all options are on the table, including a ground invasion. The call up of reservists came as Hamas fired a barrage of rockets into Israel while Israeli air strikes pounded Gaza. The hostilities, which have claimed at least 83 Palestinian and seven Israeli lives, escalated despite truce efforts mediated by Egypt.

The Israeli Defense Forces (IDF) on Thursday started sending thousands of troops to its border with Gaza as an IDF spokesman told reporters that plans were being presented to Chief of Staff Lt.-Gen. Aviv Kohavi and would then have to go to the Cabinet for approval.

Additional troops have been redeployed to the Gaza border and reservists serving as paramedics and in intelligence and other units have been called up, according to the Jerusalem Post.

“We are prepared, and continue to prepare for various scenarios,” army spokesman Jonathan Conricus told AFP, describing a ground offensive as “one scenario”.

Hamas responded to the troop buildup with defiance, with its armed wing spokesman, Abu Ubaida, urging Palestinians to rise up. “Mass up as you wish, from the sea, land and sky. We have prepared for your kinds of deaths that would make you curse yourselves,” he said.

The developments came as an Egyptian delegation arrived in Tel Aviv for talks with Israeli officials as a part of efforts to negotiate a cease-fire, according to Egyptian intelligence officials.

Meanwhile fighting between Israel and Hamas entered a fourth day with no let-up of hostilities despite the Eid al-Fitr festival marking the end of the Muslim holy month of Ramadan.

Hamas fired rockets deep into Israel on Thursday, including a large rocket at the Ramon airport near Eilat. Israel has carried out bone-rattling strikes on the besieged, densely populated Gaza Strip.

Gaza’s health ministry said the death toll has climbed to 83 Palestinians, including 17 children and seven women, with more than 480 people wounded since fighting broke out Monday. Seven Israelis, including a soldier, have been killed in the attacks.


‘There is no atmosphere for Eid at all’

In Gaza, a pall was cast over Eid al-Fitr, usually a festive time when families shop for new clothes and gather for large feasts.

Instead, Hamas urged the faithful to mark communal Eid prayers inside their homes or the nearest mosques instead of out in the open, as is traditional.

Hassan Abu Shaaban tried to lighten the mood by passing out candy to passers-by after prayers, but acknowledged “there is no atmosphere for Eid at all”.

“It is all air strikes, destruction and devastation,” he said. “May God help everyone.”

In Gaza’s southern town of Khan Younis, dozens of mourners marched through the streets carrying the bodies of an 11-year-old and a 13-year-old killed when an Israeli air strike hit near their home Wednesday.


Netanyahu: ‘We will achieve our goal’

Israeli Prime Minister Benjamin Netanyahu on Thursday visited batteries of the Iron Dome missile defense system, which the military says has intercepted 90 percent of the 1,200 rockets that have reached Israel from Gaza so far.

“It will take more time, but with great firmness … we will achieve our goal — to restore peace to the State of Israel,” he said.

The previous evening, Israeli TV reported Netanyahu’s Security Cabinet authorised a widening of the offensive that the military says has already hit 600 targets in Gaza.

The current eruption of violence began a month ago in Jerusalem, where the threatened eviction of dozens of Palestinian families by Jewish settlers ignited protests and clashes with police. A focal point of clashes between Palestinians and Israeli police was Jerusalem’s al-Aqsa Mosque, built on a hilltop compound that is revered by Jews and Muslims.


US steps in at last

The UN Security Council has held two closed-door videoconferences since Monday, with close Israeli ally Washington opposing adoption of a joint declaration, arguing it would not “help de-escalate” the situation.

US Secretary of State Antony Blinken said he had spoken with Palestinian president Mahmud Abbas, urging an end to the rocket attacks by Islamist groups, and that a US envoy would travel to the Middle East to seek to calm tensions.

Netanyahu spoke late Wednesday with US President Joe Biden, who said that “Israel has a right to defend itself”.

Violence also again rocked the occupied West Bank, where a Palestinian man was killed during a confrontation with Israeli soldiers near Nablus, the Palestinian health ministry said.