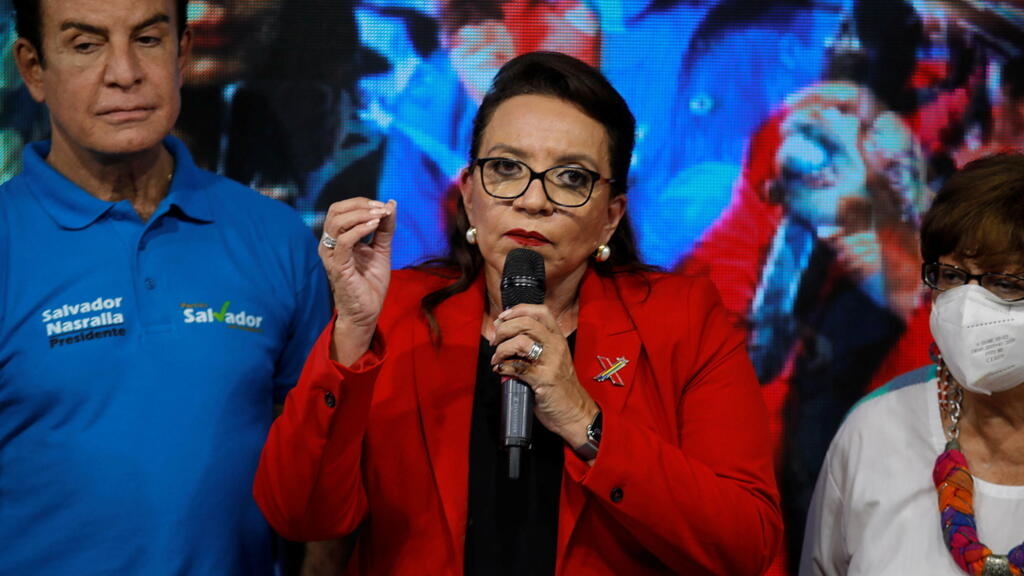 Honduran presidential candidate Xiomara Castro looked set to put the left back in power 12 years after her husband was ousted in a coup, even as the vote count for Sunday’s election unexpectedly paused for hours on Monday.

Castro, who would be the Central American nation’s first woman president, has promised big changes in Honduras including a constitutional overhaul, United Nations support in the fight against corruption, and looser restrictions on abortion.

She has also floated the idea of dropping diplomatic support for Taiwan in favor of China, a policy proposal keenly watched in Washington, Beijing and Taipei.

With just over half the ballots counted, Castro, the wife of former President Manuel Zelaya, held a nearly 20-point lead over conservative Nasry Asfura, the mayor of capital Tegucigalpa and candidate of the ruling National Party, who won 34% according to a preliminary tally. However, the tally had not been updated for over 10 hours by Monday afternoon.

Former Costa Rican President Luis Guillermo Solis, chief of the Organization of American States’ observer mission in the country, said he saw nothing untoward in the delay and expected the electoral council would clear up matters soon.

“If there isn’t an explanation, the people get a little nervous,” he told Reuters, noting he was “pleasantly surprised” with the record turnout and lack of political violence.

Celebrations broke out at Castro’s campaign headquarters on Sunday night as her vote lead held, with supporters dancing, waving flags and chanting “JOH out!” in reference to two-term President Juan Orlando Hernandez of the National Party.

Hernandez is deeply unpopular and has been implicated in a drug trafficking case in a U.S. federal court. He denies wrongdoing, but could face an indictment when he leaves office.

“We have turned back authoritarianism,” Castro told supporters late on Sunday, surrounded by her Libre party faithful, aides and family, including her husband Zelaya, who was ousted when business and military elites allied against him, ushering in a dozen years of right-wing National Party rule.

Zelaya was also implicated by a witness in a U.S. court of having taken a drug bribe. He denied the accusation.

A self-proclaimed democratic socialist in a country where the left has rarely been popular and few women hold public office, Castro has won support of Hondurans tired of corruption and the concentration of power since 2009.

“Everyone just couldn’t stand this government, too many years, too much corruption,” said Franklin Membreño, 42, owner of a small clothing shop in Tegucigalpa. “I think the only people supporting the National party were public employees.”

Results of the presidential election initially rolled in quickly, a contrast to four years ago when a close outcome and delays with the count led to a contested result and deadly protests after widespread allegations of cheating.

But results for Congress, previously under tight control of the National Party, have not yet been released. A poor showing in Congress could complicate life for a Castro administration.

If Castro delivers on campaign pledges, she could begin to reverse a weakening of the Honduran justice system that has benefited corrupt and criminal groups, a trend seen across Central America in recent years.

Her manifesto states that she will enlist help from the United Nations to build an agency to tackle corruption, while also creating more independence for prosecutors.

“Her victory was overwhelming, so they couldn’t commit fraud,” he said, referring to the ruling conservatives.

Kayla Patricia Sanchez, a 30-year-old street food vendor, was relieved there had not been a repeat of the ugly aftermath of the disputed 2017 vote.

“Thank God there wasn’t a big mess so I could come out and work today,” she said, flipping corn tortillas on a small grill.

A planned referendum by Zelaya on constitutional reform including allowing a president to be re-elected for a second term was a catalyst for the coup against him, with elites uncomfortable with his alliance with Chavez.

Despite such resistance to re-election, a top court packed with President Hernandez’s allies later changed the constitution to allow him a second term.

On Monday, Castro thanked Venezuelan President Nicolas Maduro on Twitter for a message congratulating her.

The vote took place against a backdrop of poverty exacerbated by the coronavirus pandemic, adding to anger fueled by scandals – all of which helped spur a record exodus of U.S.-bound migrants.

Castro, who sought the presidency twice earlier, including a short run in 2017 before she stood down to back another candidate, seized on the unpopularity of outgoing Hernandez.

The National Party’s candidate, Asfura, kept his distance from the president during the election campaign.

Asfura urged voters to show patience in a social media post, but stopped short of conceding.