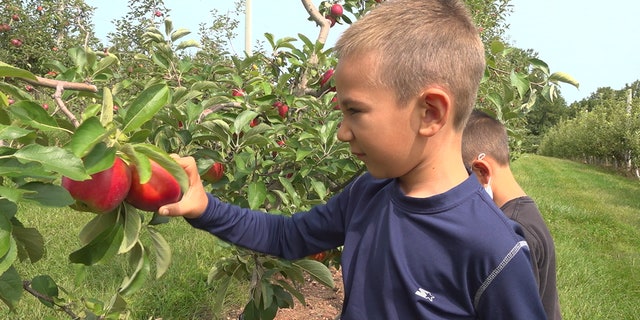 MORGANTOWN, Pa. — An invasive bug is spreading in the Northeast and sparking serious problems for apple orchards, with some orchard owners saying they are dealing with thousands of spotted lanternflies a day.

Ed Weaver, who owns Weaver’s Orchard, a family business in Morgantown, Pa. that started in the 1930s, said: “I’m fortunate to have seven grandchildren that live close to us, and they love hanging out in the orchard with me.”

They offer apple picking every year and expect big business in the fall.

“This time of year is a very busy time for us. Pick your own is a big part of our sales.”

But, for the past few years, Weaver’s been dealing with spotted lanternflies.

Some Pennsylvania-based apple orchard owners say they are dealing with thousands of spotted lanternflies a day. (Katie Byrne / Fox News)

“They’re a nuisance or annoyance, you know? As you’re walking through the orchard, they like to, when they see something moving, they tend to fly and land on it,” Weaver said.

They don’t bite, but experts with the state’s Agricultural Department said that on top of being a nuisance, these bugs could threaten plants and fruit trees.

“They will suck the sap from a tree or grapevine or other fruiting plant, and that will weaken the plant itself. It weakens a tree so eventually, it could die,” said Chris Patterson, an orchard owner in Lancaster, Pa.

According to a recent study from Penn State’s College of Agricultural Sciences, spotted lanternflies could cost Pennsylvania’s economy some $324 million a year.

“That would equate to about 2,800 jobs,” said Shannon Powers, the press secretary for Pennsylvania’s Department of Agriculture.

Powers said people are urged to kill spotted lanternflies as soon as they see them.

“Kill it. Squash it, and report it when you do,” said Powers.

Experts said the insects, native to China, have been spreading fast.

THE ‘STRAWBERRY CHALLENGE’: TIKTOK USERS ARE EXTRACTING TINY BUGS FROM FRUIT WITH SALTWATER, FREAKING OUT.

According to the U.S. Department of Agriculture, spotted lanternflies have reached parts of New Jersey, Delaware, Maryland, Virginia and West Virginia. The bugs first popped up in Pennsylvania six years ago.

According to the U.S. Department of Agriculture, spotted lanternflies have reached parts of New Jersey, Delaware, Maryland, Virginia and West Virginia.

“They just get everywhere. They get in the house, they get in your car and that’s one of the problems. They will hitch rides for long distances and that’s how they spread,” Patterson said.

He’s spotted lanternflies in his orchard for a few years.

“This year, I would say the number of lanternflies I’ve seen has doubled,” he said.

He’s been trying to keep them under control with a homemade trap.

“This is just flypaper, It’s put on the trees backwards, the sticky side out,” Patterson explained.

He keeps replacing it throughout the summer.

Fruit growers have said the only relief they’ll get from these spotted lanternflies is when the first freeze of the season comes, usually in October.