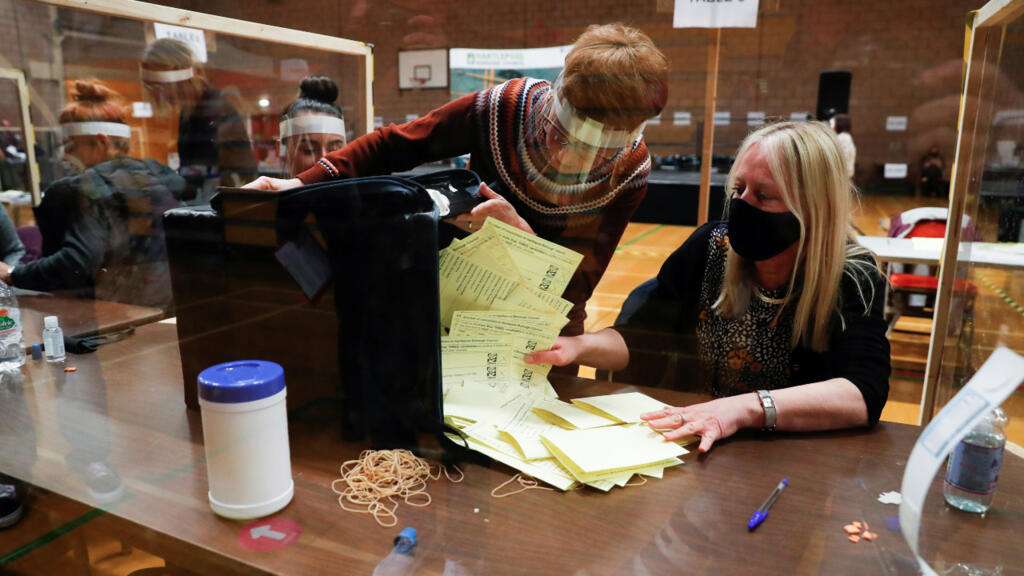 The “Super Thursday” regional and local elections could reshape the UK as pro-independence forces in Scotland, where voting for the devolved parliament was also held, bid to break away.

Results in Scotland are due on Saturday.

But early results from England on Friday showed that the Conservatives had won a landslide in the parliamentary seat of Hartlepool in the northeast, a bitter blow to the opposition Labour Party and its leader Keir Starmer.

Hartlepool, a rust-belt constituency deep in traditional Labour heartlands which has never voted Conservative since its creation in 1974, saw a 16 percent swing to the Tories.

“Labour have taken people in Hartlepool for granted for too long.”


Her win continues the trend from the last election in December 2019, when Brexit was the dominant issue and Conservatives grabbed a string of seats across Labour’s so-called “Red Wall” heartlands in northern England.

The vote in strongly pro-Brexit Hartlepool was held alongside local elections across much of the country after the town’s Labour incumbent quit over allegations of sexual harassment.

In 2019 — Labour’s worst election result since 1935, under the hard-left leadership of Jeremy Corbyn — a quarter of Hartlepool’s electorate opted for the upstart Brexit Party.

Now, with Britain’s withdrawal from the European Union complete and that party rebranded, those voters appeared to flock to the Conservatives rather than back to Labour.

The result will ratchet up the pressure on Starmer, elected leader a year ago promising to rebuild the party and reconnect with its traditional voters.

“There’s no hiding from the fact this is a shattering result for Labour,” senior Labour MP Steve Reed told the BBC.

“It tells us that the pace of change in the Labour Party has not been fast enough. We need to quicken it up.”

Ahead of the official results in Hartlepool, a giant inflatable Johnson appeared outside the building where the vote count was taking place.

The outcome suggests Johnson continues to enjoy popularity in former Labour strongholds and has benefited from a “vaccine bounce” — even while Britain has suffered one of the world’s worst death tolls from Covid-19.

“The work to repay that faith starts right now, as we continue with our agenda to level up and build back better from the pandemic,” said Conservative Party co-chair Amanda Milling.

Johnson, who has been dogged in recent weeks by several scandals, has campaigned on his record as the leader who finally “got Brexit done”, supported the economy during the pandemic and rolled out a successful vaccine drive.

With early results showing his Conservatives also enjoying success in councils in the northeast as well as in the Midlands and southeast, Starmer is facing an increasingly daunting task to unseat him at the next general election due in 2024.

Starmer had already played down expectations for Labour, stressing “I never thought we would climb the mountain we have to climb in just one year”.

“We’ve got to rebuild into the next general election — that is the task in hand,” he said ahead of Thursday.

Results of voting that took place for local councils in England, regional mayors including in London, and for the devolved assemblies in Wales and Scotland, are expected later Friday and over the weekend.

In Edinburgh, the Scottish National Party (SNP) is seeking a pro-independence majority to put pressure on Johnson to permit another referendum on splitting from the UK, after most Scots voted in 2014 to stay in.

“It really is on a knife edge,” SNP leader and Scottish First Minister Nicola Sturgeon tweeted Thursday, appealing for turnout as she campaigns to hold a second plebiscite once the pandemic subsides.