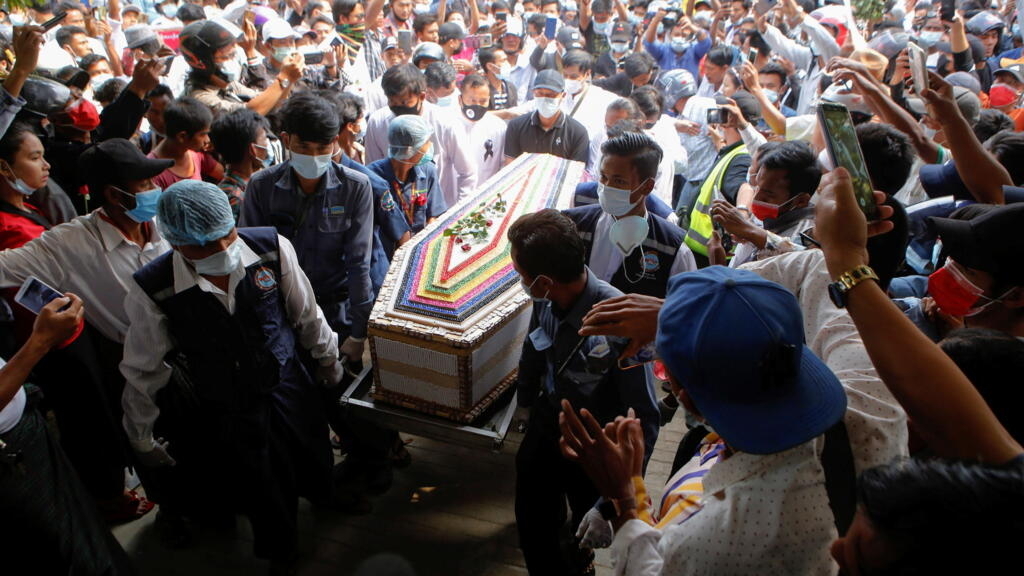 A lethal attack on anti-coup protesters in Myanmar sparked fresh UN condemnation of the country’s new military regime on Sunday, as mourners held a funeral for a young woman who has become a national symbol of resistance to the junta.

Saturday marked the deadliest day so far in more than two weeks of nationwide street demonstrations after two people were killed when security forces fired upon a rally in Mandalay, while a third man was shot dead in Yangon.

As dusk fell Sunday in Yangon, Monywa and Myitkyina, protesters held candlelight vigils and prayer ceremonies to pay tribute to the dead.

United Nations Secretary General Antonio Guterres condemned the use of “deadly violence” against the crowd in Mandalay.

“The use of lethal force, intimidation & harassment against peaceful demonstrators is unacceptable,” Guterres wrote on Twitter.

The UN General Assembly is scheduled to convene on Friday for informal talks about the situation of Myanmar’s Rohingya Muslims, but the coup is likely to take centre stage.

Late on Sunday, Myanmar’s foreign ministry accused the UN and foreign countries of “flagrant interference” in its internal affairs.

“Despite facing the unlawful demonstrations, incitements of unrest and violence, the authorities concerned are exercising utmost restraint through minimum use of force to address the disturbances,” it said in a statement.

I condemn the use of deadly violence in Myanmar.

The use of lethal force, intimidation & harassment against peaceful demonstrators is unacceptable.

Everyone has a right to peaceful assembly. I call on all parties to respect election results and return to civilian rule.

Security forces in Mandalay, the country’s second-largest city, had attempted to raid a shipyard and detain port staff on strike to protest against the army takeover.

Medical rescue workers said troops used live rounds and rubber bullets against a crowd of people who had started flinging rocks in an effort to stop the arrests.

Another 30 were wounded, with half of the injuries from live rounds, he added.

A graphic video circulated on Facebook showing a teenaged victim splayed on the ground and bleeding from his head as a bystander placed a hand on his chest to feel for a heartbeat.

State media made no mention of the deaths but blamed demonstrators for the affray and said protest leaders had been detained.

“Some” protesters had been injured by security forces, the Global New Light of Myanmar reported, along with three soldiers and eight police officers.

In a separate incident on Saturday, a 30-year-old man was killed in Yangon while patrolling the neighbourhood as part of an initiative to guard against night-time arrests of activists.

Tin Htut Hein’s sister-in-law said he had been shot dead by police.

“His wife is now heartbroken,” she said. “They have a four-year-old son.”

Police claimed 20 people attacked a vehicle while officers tried to bring an injured man to hospital, the state-run broadcaster said, and reportedly fired warning shots to disperse the group.

Undeterred by the violence of the previous day, large crowds returned to the streets of Mandalay and Yangon on Sunday.

In the capital Naypyidaw, a funeral service was held for a young protester who died Friday after being shot in the head at a rally.

Mya Thwate Thwate Khaing, who turned 20 almost two weeks ago as she lay unconscious in a hospital bed, has since become a potent symbol of the campaign against military rule.

A large motorbike guard of honour accompanied her funeral procession, alongside vehicles adorned with floral wreaths and large photos of the grocery store worker.

Vigils in her honour have been held elsewhere in the country by protesters reciting the Metta Sutta, a Buddhist prayer urging protection from harm.

Much of Myanmar has been in uproar since troops detained Suu Kyi on February 1, with massive street demonstrations in major cities and isolated villages across the country.

The United States, Britain and Canada have all responded with sanctions targeting Myanmar’s top generals.

European Union foreign ministers will meet Monday to discuss their own measures against the regime.

As Myanmar braced for an eighth straight day of internet blackouts, expected to begin in the early hours of Monday, the US Embassy flagged reports the outage could last until noon in Yangon rather than the usual eight hours from 1:00-9:00 am.

Since the army takeover, 640 people have been detained, according to the Assistance Association for Political Prisoners monitoring group.

Among those targeted have been railway workers, civil servants and bank staff, who have walked off their jobs as part of the anti-coup campaign.

“Many police trucks came and arrested (him),” said his wife Khin Sabel Oo, in a video she broadcast live on Facebook as her husband was taken away.