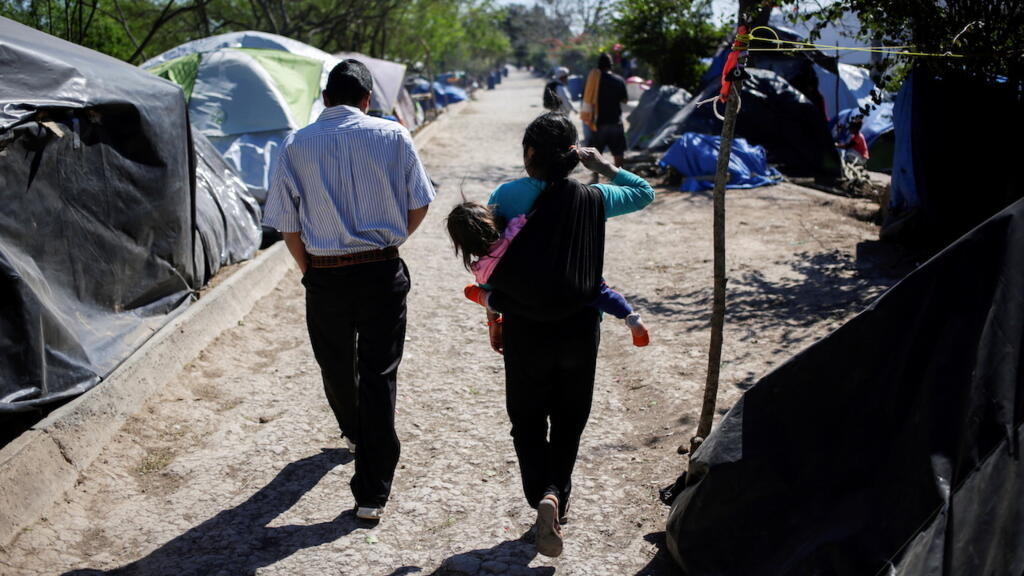 Migrants seeking to enter the United States will again have to stay in Mexico as they await immigration hearings, as the Biden administration reluctantly announced plans Thursday to reinstate the Trump-era policy and agreed to Mexico’s conditions for resuming it.

Revival of the “Remain in Mexico” policy comes even as the Biden administration maneuvers to end it in a way that survives legal scrutiny. President Joe Biden scrapped the policy, but a lawsuit by Texas and Missouri forced him to put it back into effect, subject to Mexico’s acceptance.

Mexico’s foreign relations secretary said in light of U.S. concessions Mexico will allow returns, expected to begin next week, “for humanitarian reasons and for temporary stays.”

About 70,000 asylum-seekers have been subject to the policy, which President Donald Trump introduced in January 2019 and which Biden suspended on his first day in office.

Illegal border crossings fell sharply after Mexico, facing Trump’s threat of higher tariffs, acquiesced in 2019 to the policy’s rapid expansion. Asylum-seekers were victims of major violence while waiting in Mexico and faced a slew of legal obstacles, such as access to attorneys and case information.

Migrants are expected to be returned starting Monday in one border city, which has not been identified. It will eventually be done in seven locations: San Diego and Calexico in California; Nogales, Arizona; and the Texas border cities of Brownsville, Eagle Pass, El Paso and Laredo.

The Homeland Security Department said Thursday that it was acting to comply with a court order but that Secretary Alejandro Mayorkas believes the policy “has endemic flaws, imposed unjustifiable human costs, pulled resources and personnel away from other priority efforts, and failed to address the root causes of irregular migration.”

The dual announcements follow intense discussions between the U.S. and Mexico after U.S. District Judge Matthew Kacsmaryk, a Trump appointee in Amarillo, Texas, ordered the policy be reinstated, subject to Mexico’s participation.

The policy’s new iteration, outlined in a briefing for reporters and a court filing Thursday, promises major additions and changes that Mexico demanded.

All migrants subject to the policy will be vaccinated against COVID-19. Adults will get the Johnson & Johnson vaccine, which requires only one shot. Children who are eligible under U.S. guidelines will get the Pfizer shot, with second shots when they come to the U.S. for their first hearings.

The U.S. will try to complete cases within 180 days, a response to Mexico’s concerns that they will languish. The Justice Department is assigning 22 immigration judges to work on these cases exclusively.

U.S. authorities will ask migrants if they fear being returned to Mexico instead of relying on them to raise concerns unprompted. If the migrants express fear, they will be screened and have 24 hours to find an attorney or representative.

The Biden administration is working to ensure migrants’ safety when they travel to and from court, including within Mexico. Some migrants returned from Eagle Pass, Laredo and Brownsville, where Mexican border cities are especially dangerous, will be moved to locations farther inside Mexico.

The policy will apply to migrants from Western Hemisphere countries, except Mexicans, who are exempt. U.S. officials haven’t said how many will be processed daily. The administration has kept in place another Trump-era policy that allows it to return Central Americans to Mexico on the grounds of preventing the spread of COVID-19.

Migrants will have an opportunity to meet with attorneys before each hearing. The State Department is working with Mexico on locations for video and phone access to attorneys in the U.S.

The changes mirror many conditions that Mexico laid out last week.

“The Mexican government reaffirms its commitment to migrant rights as well as to safe, orderly, regulated migration,” Mexico’s foreign relations secretary said in a statement Thursday confirming that the country accepted the Biden administration’s changes and additions.

Mexico is also seeking money from the U.S. for shelters and other organizations to substantially increase support for migrants waiting in Mexico.

Many U.S.-based legal aid groups that have represented asylum-seekers waiting in Mexico say they will no longer take such cases, raising questions about how the U.S. can satisfy Mexico’s insistence on better access to counsel. Administration officials say they believe there are enough other lawyers who will represent asylum-seekers sent back to Mexico.

Many immigration advocates say the policy is beyond repair.

“The ‘Remain in Mexico’ policy was a humanitarian disaster when it was first implemented, and it is doomed to be so again,” said Eleanor Acer, senior director for refugee protection at Human Rights First, which documented violence against asylum-seekers while they were waiting in Mexico.

“The announced adjustments to the policy are not sufficient to address these fundamental concerns,” the U.N. High Commissioner for Refugees said in a statement.

“I will continue to fight to restore safety and order along our southern border, making sure that this essential program is implemented in full compliance with the court’s order,” he said.

Mark Morgan, the acting commissioner of U.S. Customs and Border Protection under Trump, dismissed many changes as cosmetic and said the new policy mirrors what was in place. As a staunch advocate of the policy, he welcomed plans to reinstate it but wants to see how it is rolled out, saying, “The proof is in the pudding.”