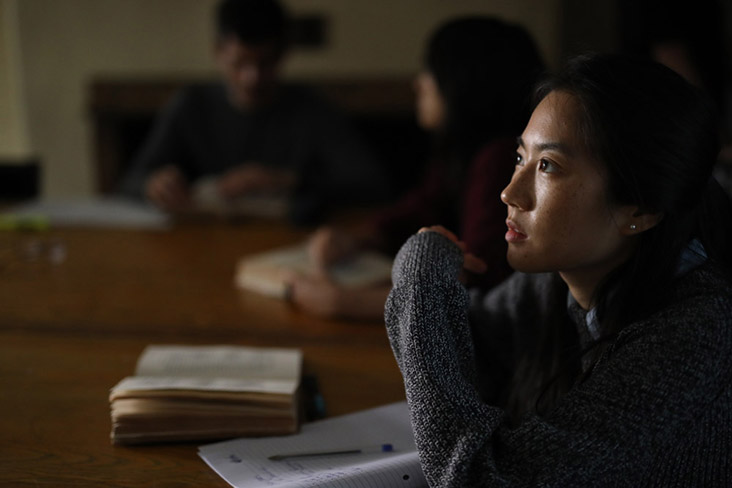 KUALA LUMPUR, Oct 29 — Jing Ai Ng would be remarkable simply for that confluence of two different cultures. The stories she could tell, right?

Fortunately for us then, Ng’s day job is exactly that — telling stories — albeit in the form of films. Her most recent short film, Fleck, was shortlisted in the best short film category at the 2020 Cannes Lion Young Director Awards and won the Grand Prize at the Directors Guild of America (DGA) 2019 Student Film Awards.

But what’s the story behind the storyteller?

Ng’s early years were spent with one foot in two worlds: primary and middle school in KL while joining her family for almost half of every year in Miami.

She recalls, “It definitely affected the way I saw the world, because on top of growing up in Malaysia, I spent so much time in America. I was culturally confused (still am), but I don’t see that as a bad thing.”

Today, the 26-year-old is based in Los Angeles though she returns to KL for a few months every year. She graduated from the American Film Institute Conservatory in 2019 as its first Malaysian directing fellow and is a Telluride Film Festival Symposium fellow.

The real turning point for Ng came when she watched Peter Jackson’s Lord of the Rings trilogy. She says, “That was the first time I thought: I have to tell stories. I wanted to be a novelist, but I’m undoubtedly a visual thinker; I think predominantly in images and when I finally discovered directing it just felt more natural.”

The craft of directing, which Ng likens to a unique mix of hard and soft skills, is a constantly evolving process. She says, “It’s about using your craft to drive home to the audience what you want to say.”

From Jared Leto to Reese Witherspoon, some actors are infamously reluctant to rewatch their own movies. Ng understands the feeling: “I actually dislike watching my past work because in the moment I give everything I can to my projects but then I want to move on. That has nothing to do with the confidence I have in myself as a director; it’s just an innate feeling I have.”

Instead, she prefers the instantaneous feedback and lessons one gets on set. She adds, “I think it’s important to make your own mistakes, so I’m glad I’ve had the opportunity to direct so much especially since I’m less than a year into my professional career.”

According to Ng, whilst not autobiographical, Fleck is her most personal film yet. The short film revolves around the struggles of Jamie (played by Stacy Chu), an Asian-American teenager searching for her own identity while at an elite boarding school.

She says, “It’s a film that came from reflecting on my experiences and finding a way to dramatise them. When I first went to boarding school, I had an idealised version of the US and the school. I clung to it until I couldn’t because like everything else in this world, it was flawed.”

What makes Fleck such a calmly mature film, an assured progression from Ng’s earlier 2017 shorts Soulmates and The Lonely Planet, is how it captures that exact moment of change and realisation of change for one of the characters.

“I had a blind belief in something I hadn’t yet fully experienced. Part of growing up, and why coming-of-age stories are so fascinating to me, is that people are constantly remaking themselves — change is fascinating to all of us,” says Ng.

Despite her early inclination towards films, it was only four years ago that Ng decided to pursue film-making. She explains, “I didn’t think it was possible for me to become a director, because the films I aspire to make aren’t typically directed by people who look like me. I had a university professor tell me women weren’t directors.”

That outrageous assertion motivated Ng to work even harder. Clearly there are women who are directors but the numbers are still dismal. According to Women and Hollywood, of the 112 directors attached to the top grossing 100 films in 2019, only 12 were women (10.7 per cent).

Ng says, “The truth is, as a director you’re only as good as your collaborators. Good ideas come from your team. I applied to the American Film Institute Conservatory because I admired their alumni — Terrence Malick was a huge inspiration for me — and wanted a network of collaborators.”

On her second day at the Conservatory, Ng was informed that she was the first Malaysian director to ever attend. She says, “That kind of set the tone for me. I’m extremely grateful for my experience there; I think there’s a good reason that it’s considered the best film school in the world — because there’s so much pressure on you and you can turn that into a learning experience for your professional life.”

Ng discovered that nearly all of her directing classmates were older than her, some by a decade. She says, “It was beneficial to be surrounded by people who just knew more — teachers and classmates alike. You direct four or five projects, and you’re able to build experience and confidence through that. I think the resources may be similar to other film schools but the pressure is one-of-a-kind.”

That pressure is part of the process of becoming a stronger film-maker — learning to take intense criticism and feedback, for one. Ng shares, “When I was younger, my initial instinct was to take every piece of feedback and try to make it work. Most feedback is useful; some aren’t. Film is an extremely subjective experience. A person can hate your movie but then someone else will absolutely love it.”

Ng observes the tendency in the film industry for young film-makers to model or shape themselves to whatever content is popular in the moment, but she feels it’s more important to stay true to oneself and the stories one wants to tell.

She says, “Bong Joon Ho quoted Martin Scorsese in his Oscar acceptance speech: ‘The most personal is the most creative.’ That’s the advice that I follow closely — those are two of my favourite directors.”

But the director is just one person. Despite the notion many have of a director as the person on the set who controls everything, Ng believes that creating an environment where good ideas could come from anyone is crucial.

“You can’t make a movie alone. Jan Rischbieth Córdoba, my cinematographer, is a main collaborator and a constant in most of my projects. He’s extremely technical, which complements my directing process well. I learned the most working with my editor on Fleck, Bri Chmiewelski. She’s really good at bringing a new take to the footage, so it forces me to think differently about the film we’ve shot.”

Ng is currently in the middle of cutting her next short film, Summer Christmas. She says, “The development process has been hard because of the pandemic… it means paring back the scripts so they can be shot within various limitations. Every part of the process has been longer and more complicated because of remote working; the challenges of working with your collaborators when they’re in different time zones are numerous.”

Obstacles can be challenging or they can spur us on. For Ng, they have a good lesson in patience. She adds, “I’ve been writing a lot in the meantime, and my feature script Forge is currently in the second round of consideration for Sundance Institute’s Screenwriter’s Lab.”

Film-making is a long, arduous process; passion for the craft and the story one wishes to tell is essential if one hopes to bring a film to fruition, from idea to finished product. Ng says, “Most people don’t think about it: most films take at least two years to complete, and we consume them in just a couple of hours.”

Perhaps that is what keeps Ng going — whether her film is 20 minutes or two hours, the thought that one day, after all the work has been put in by her cast and crew, her team of collaborators, that the film will be out there for everyone to watch, that the story she wishes to tell will be told.