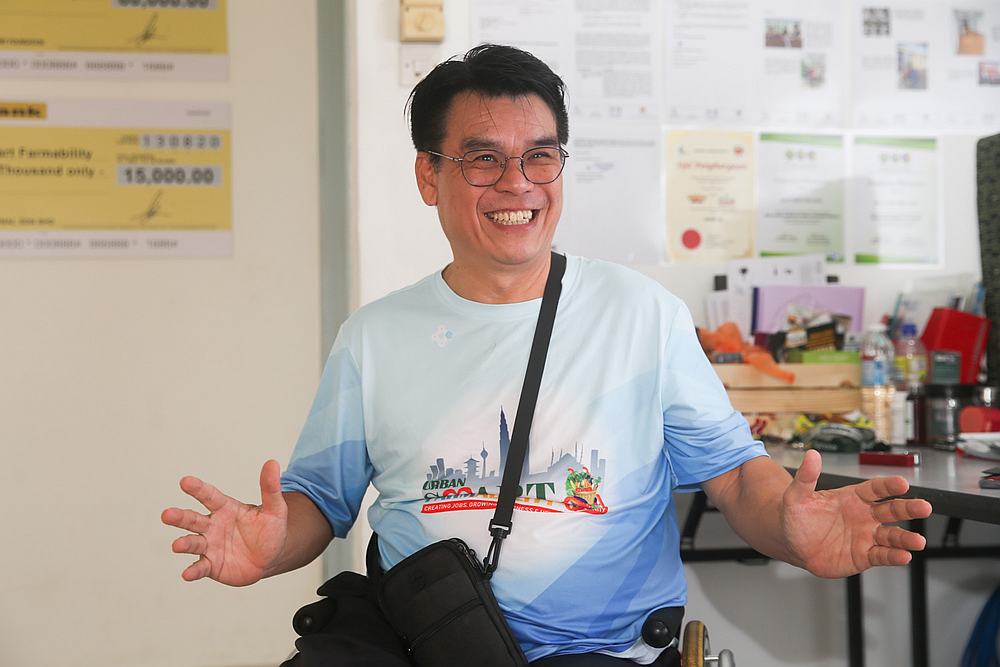 PETALING JAYA, Sept 18 — Five years ago, Billy Tang, an agriculturist and private researcher, was left paraplegic after a serious car accident broke six of his ribs and tore his spinal cord.

Despite his injuries, Tang embraced his “new life” as a Persons With Disabilities (PWD) and now actively seeks to help disabled communities through his work at his social enterprise PWD Smart Farmability.

The 54-year-old, who has been in the agriculture industry for the past two decades, recently launched a number of initiatives to aid underprivileged and PWD families, by providing them with fresh, nutritious produce — thanks to his self-sustainable terrarium organic grow box invention.

“What we do is basically bring ‘nature’ into the terrarium box. It’s all-natural. It’s just science — how the microbes and microorganisms work with no fertilisers,” said Tang in an interview with Malay Mail.

The terrarium boxes called HOPE boxes are designed to be self-watering, as the enclosed box is only required to be placed under the sun and watered once a week — staying regenerative for at least three months.

Tang has successfully acclimatised a variety of vegetables in the boxes such as Brazillian spinach, red watercress and sayur manis (sweet leaf).

Each box can be adopted for RM150 and can be replenished after three months at Tang’s smart farm located at USJ 2 in Subang Jaya for a similar fee, with the proceeds going towards the salary of the PWD workers running his farm.

Prior to the movement control order, Tang had a single mother with two PWD children under his employment and is currently seeking for more employees.

Tang said that he hopes to spread more awareness about his invention, mainly because he also recently-launched the Fresh Food Bank project which aims to donate these terrariums to indigent families.

“Nutritious food should not be a luxury. Especially now during the Covid-19 pandemic, which is a direct war between a virus and our body’s immune system. This puts families who can’t afford to eat healthily at risk,” said Tang.

“Poor families, they rarely get the chance to have decent, nutritious food. We’ve had people cry when they receive these food items. So we are running the adoption programme for these boxes online. Malaysians from all over the world can adopt one for themselves, or for those who need it more.

“And for every 100 boxes adopted, I can afford to employ one disabled person — giving them an opportunity to earn an income and learn some life skills.”

These marginalised communities will be identified by Tang’s impact partners such as Hospital Sungai Buloh, Rotary Club District 3300 and Daily Bread Food Bank.

But he isn’t all focused on just the nutrients and minerals from fresh produce as Tang also launched another adoption programme called “Adopt a Fish, Feed a Family” to donate 1000 giant organic tilapia fish, priced at RM35 each, to underprivileged families.

“During the movement control order, we couldn’t go down to check on our fish farm. So, all the fish grew up to 2.5 kilogrammes,” said Tang.

“We figured this would be a nice meal for a family from a poor background, getting such a large mass of healthy protein that can easily feed a family of eight.”

Tang added that his impact partners have also vowed to continue to supply 1,000 tilapia fish every month for his adoption programme if there is a good response from the public.

To date, 770 of PWD Smart Farmability’s terrarium boxes and 500 tilapia fish have been adopted by generous donors from the public, but Tang hopes to get more organisations and corporates involved as well so that more underprivileged families can have access to organic and healthy food.

“I can give these corporations good PR and CSR value, through humanitarian and environmentalist initiatives with the Fresh Food Bank,” said Tang.

“For just RM1,500 you can adopt 10 terrariums for poor families to get the valuable nutrients they need for a couple of months. And when there are more adoptions, PWDs can get jobs too. So, you’re helping them in more than one way by adopting these boxes.”

For more information about PWD Smart Farmability and its adoption programmes, surf over to their website.