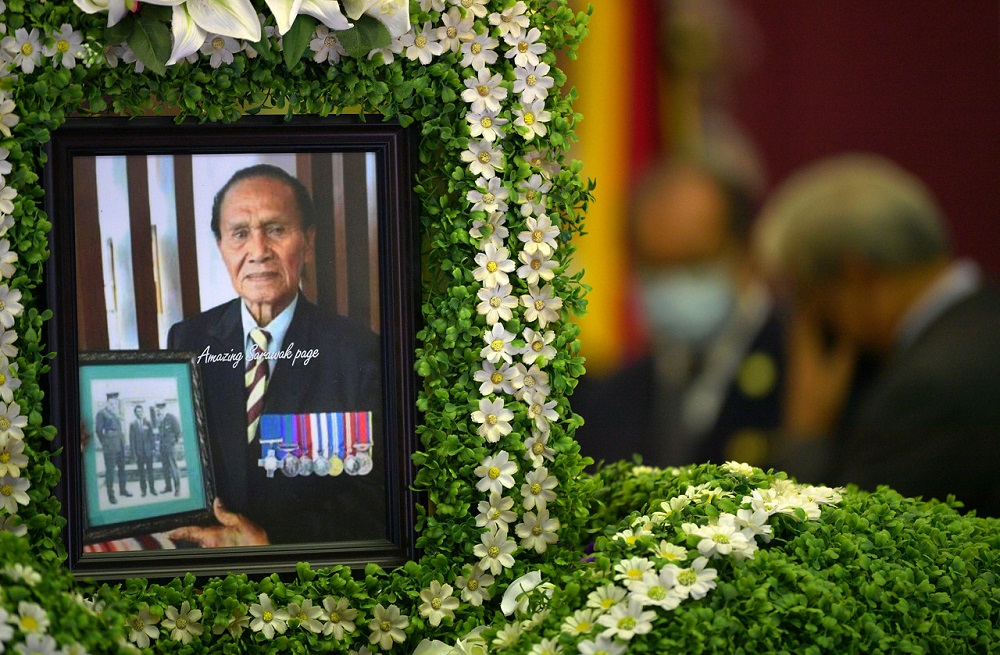 KUCHING, Sept 21 — Malaysia’s sole George Cross medal recipient, the late Datuk Awang Raweng’s contribution and sacrifices during the Emergency, a counter-insurgency against communist terrorists in 1951, is proof that a Sarawakian had come to the aid of Malaya even before the formation of Malaysia.

Former Sarawak deputy chief minister Tan Sri Alfred Jabu Numpang said as an Iban tracker, Awang was among the first to answer the call from Malaya for assistance to help the Commonwealth Forces to fight the communists.

“Typical of an anak Sarawak who lives by the Agi Idup Agi Ngelaban spirit (Still Alive, Still Fight) and Anang Takut, Anang Surut ke Munsuh (Don’t fear, Don’t Surrender to the Enemy), he fought on and won the battle in spite of being outnumbered,” he said.

Speaking to reporters after paying his final respect to Awang, who passed away on Friday at the age of 104, he said that the late Awang joined the Worchestershire Regiment as a tracker at a young age to fight the communists in the Malayan Peninsular in the 1950s.

“This is the very thing we must remember, that we have been helping Malaya even before the formation of Malaysia and that we care for the security of this region,” he said.

Back in 1989, Jabu recalled that he was the Sarawak minister responsible for the reburial of the remains of Rentap, an Iban warrior who fought against Brooke’s rule in the 19th century, at Bukit Sibau in Betong.

As a good and loyal friend, he said the late Awang had been invited for the ritual alongside other prominent Sarawak Iban warriors that include the late Datuk Kanang Langkau.

He said due to the insurmountable contributions of Awang to the state and nation, he had recommended the former soldier to be awarded a state’s title, the Panglima Setia Bintang Sarawak (PSBS), which carries the title ‘Dato’.

“In fact, I was very happy when he was awarded the Datukship in 2018 as I was partly responsible in making the recommendation to the government for him to receive the title for his sacrifices to the nation,” he added. — Bernama