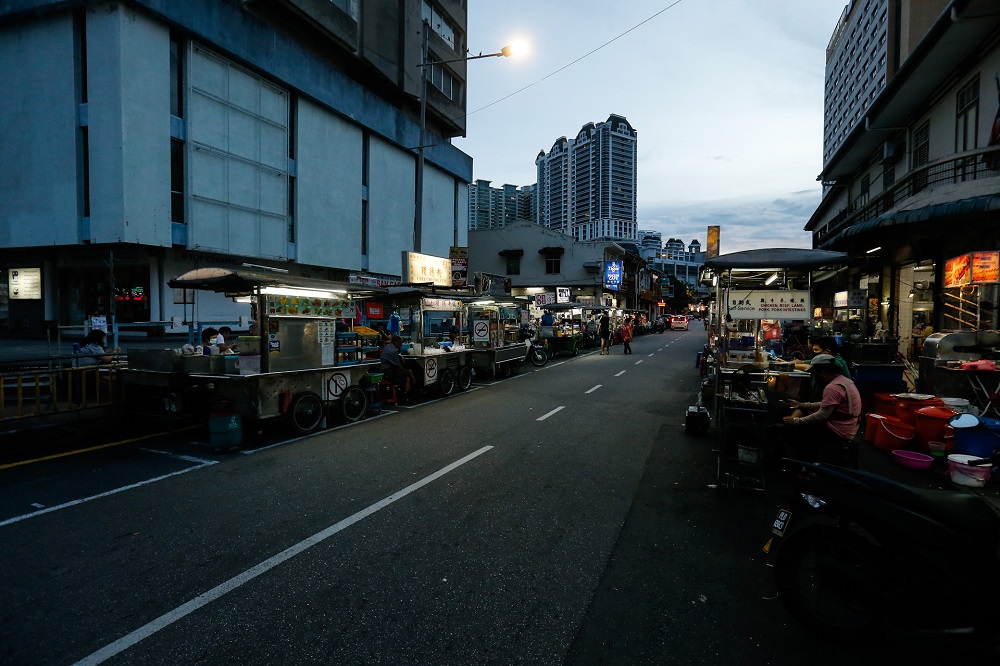 GEORGE TOWN, Dec 2 — It’s been nearly a month since the government reintroduced the conditional movement control order (CMCO) in the peninsula and while businesses everywhere have taken a hit, Penang hawkers are struggling to earn even RM50 a day.

Popular hawker food spots on the touristy island such as Gurney Drive that bustled with visitors near and from abroad before the Covid-19 pandemic, have become ghosts of their former selves.

The few tables and chairs set up are barely occupied. Many hawker stalls are also shut.

Over in New Lane, off Macalister Road in the state capital, almost half of the 28 hawker stalls that lined the narrow street have opted to close their stalls since the four-week CMCO was imposed on November 9.

Neow Boon Hai who sells lor bak there, said many of the hawkers would rather close shop than waste food when there were so few people buying.

“Imagine they prepare the food for the day and there are barely any customers, they will have to throw away the food and prepare a new batch the next day. This is money down the drain,” the 30-year-old said.

The hawkers at New Lane usually start operating around 4pm up to midnight. These days, some have taken to opening their stalls earlier and calling it a night by 9pm.

“Some open early, around 2.30pm and hope to get some business from people who work around here because by 8pm, the city is deserted; there is barely anyone in the city, so it is best we close early,” Neow explained.

He said the prohibition of interstate travel due to the CMCO has taken a heavy toll on the hawkers there as the majority of their clientele were from outstation.

He claimed business has dropped by up to 90 per cent if compared to the days before the pandemic.

“Previously, a stall can sell between 700 to 800 plates a day, now it has dropped to maybe 20 to 30 plates, or even less. Sometimes, we barely make RM50 a day,” he told Malay Mail when met recently.

The federal government reversed its relaxation of rules under the recovery movement control order on all states in peninsular Malaysia barring Perlis, Pahang and Kelantan from November 9, following a resurgence of Covid-19 infections that drove daily cases into the four-digit zone.

It later lifted the CMCO for four states — Kedah, Melaka, Johor, Terengganu — on November 21, but placed Kelantan under partial lockdown instead.

The Klang Valley, which covers Kuala Lumpur, Selangor and Putrajaya, has been under CMCO since October 14.

Now, about half the country is under CMCO, which is scheduled to end on December 6. However, many of the hawkers whom Malay Mail spoke with said they had heard rumours of an extension and were anxious that it may happen.

Neow said the hawkers have signed up for every service available including Delivereat, Grab and Foodpanda, but orders in Penang were very few.

“Sometimes we get one order. Most of the time, not even one order so it is not working for us,” he said.

He said the situation is probably the same over at the Kimberley Street hawker centre, another popular tourist spot in George Town with hawker stalls lining both sides of the road.

Neow thinks coffee shops and hawker centres in the outskirts of George Town are not as badly affected as their counterparts in the city centre as they are mostly patronised by residents and others in the community.

“They too saw a drop but they are not as badly affected as us since our clientele were from outstation and foreigners,” he said.

It was also eerily quiet over at the Gurney Drive Hawker Centre, a far cry from the days when the place used to be packed with visitors.

Many of the hawkers in the centre have opted to close their stalls during the week and open only on Fridays, Saturdays and Sundays while some still tried their luck by staying open on most days in hopes of earning a small sum just to stay afloat.

A woman who sells muar chee said she could barely make RM20 a day, especially on weekdays.

“That’s why some stalls chose not to open on weekdays, some chose to open only during the weekends and some take three days off instead of two days,” she said, declining to give her name.

She said the stalls at Gurney Drive no longer close at midnight, unlike in pre-Covid days.

“It is dead by 9pm here so we might as well close and go home,” she said.

Suhairi Saad and Husna Azahari who man the Jamaliah Nasi Lemak stall at Gurney Drive said their business had dropped by more than 50 per cent.

“About 70 per cent of our customers are from outstation so when the CMCO was imposed in Selangor, we were already affected,” Suhairi said.

He said many of the other stalls in Gurney Drive chose to close on weekdays and open only the weekends when there are slightly more people who venture out for food.

Suhairi counts himself as one of the lucky ones to have regular customers, some who frequented the stall when his mother started the business in 1995. He said the regulars were all Penangites.

“We are still able to survive as we still have some regulars who would order takeaway and delivery from us,” he said.

The hawkers Malay Mail spoke with hoped that the CMCO would end soon and that people would be allowed to start travelling inter-state again.

“We understand that the CMCO is necessary but we are now hoping it will end soon so that we can survive through this, we are already almost drowning,” Suhairi said.