Malaysia’s former leader Mahathir Mohamad on Tuesday (April 20) urged the country’s king to revoke a Covid-19 state of emergency, saying the royal order – made in January on the advice of the government – was uncharacteristically turning the country’s Malays against its royal families.

The emergency powers granted to Prime Minister Muhyiddin Yassin and the suspension of parliament had transformed the country into a “dictatorship”, the 95-year-old said.

He was speaking to reporters after delivering a petition to the national palace that contained some 39,000 signatures.

The elder statesman’s remarks also follow a wave of veiled criticism of the country’s queen, Tunku Azizah Aminah, after she seemingly responded in a flippant manner to a commenter on Instagram .

The king, Sultan Abdullah Sultan Ahmad Shah, is also under the spotlight following a media report that claimed – based on unnamed sources – that he played a role in the domestic distribution of a small batch of Sinopharm Covid-19 vaccines , which are yet to be approved in Malaysia.

The controversies come amid a surge in Covid-19 cases and as Muhyiddin’s government struggles to inject a sense of urgency into its vaccination drive.

Mahathir said it was “unusual” to see Malays – the country’s majority ethnic group – openly express dissent against the country’s hereditary rulers. The country’s nine royal households have long been seen as the defenders of centuries-old Malay culture and the Islamic faith.

Strident criticism of the sultans and their families is frowned upon and in the past has been met by authorities with sedition investigations.

“This is very unusual, for the Malays to go against their own rulers,” Mahathir said. “It is quite clear that very large numbers of Malays are now angry as they are suffering because of this darurat  [‘emergency’],” he said.

He said he believed the government had not informed Sultan Abdullah – who is serving a five-year term as the national king – about the “feelings of the Malays”.

A key reason for the unhappiness, Mahathir said, was due to the perception that the emergency declaration made in January was the king’s decision.

On the contrary, Sultan Abdullah serves as a constitutional monarch and is obliged to act on the advice of the prime minister on most matters.

Mahathir said he conveyed these concerns to Sultan Abdullah before there were any further actions that might “increase the anger of the people”.

Mahathir, whom Muhyiddin ousted as prime minister in an elaborate political coup in March last year, in a commentary published earlier on Tuesday reiterated his belief that the prime minister had declared the emergency to cling to power rather than to stem the public health crisis.

Since the change of government, Muhyiddin has faced constant attempts by Mahathir and others to topple him by forcing defections of MPs and votes of no confidence. 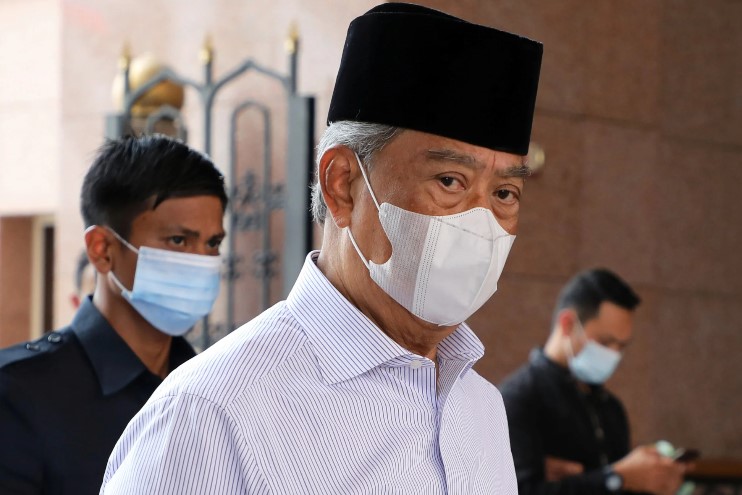 The government’s decision to suspend parliament while the emergency is in force has meanwhile given Muhyiddin the power to govern by executive fiat.

“The country is now ruled by decree. There is no longer any democracy,” Mahathir wrote on his blog chedet.cc. “The voice of the people in a functioning democracy is via parliament. But it is not open. The only description we can make of this government is that it is a dictatorship.”

Online, Malaysian social media users on Tuesday were continuing a carefully couched effort to mock Queen Tunku Azizah Aminah over her remarks in response to a commenter on Instagram.

In a now-deleted post, the queen had said she spent an afternoon with chefs in the palace kitchen who were preparing dishes.

A commenter asked if the chefs had received their Covid-19 vaccines . In response, she wrote: “Dengki ke? [‘Are you jealous?’]”. In response, beginning Monday night, thousands of social media users began using the hashtag #Dengkike.

The queen deactivated her account after the hashtag began trending but returned to the photo-sharing platform on Tuesday morning.

Other commenters meanwhile made oblique references to an Asia Sentinel  article that alleged Sultan Abdullah had returned from a trip to the United Arab Emirates last December with 2,000 Sinopharm Covid-19 vaccines , with the jabs later distributed to his family, business partners and friends.

Some social media users cautioned that discussing the contents of the article in public might be tantamount to derhaka (‘treason’), and referenced authorities’ previous investigations into individuals who criticised members of the country’s royalty.

The Chinese-made vaccine is not among the Covid-19 jabs approved in Malaysia so far. In comments to local media, the Health Minister Adham Baba, has denied the claims. The national palace has not issued any formal statement on the matter.

This Week in Asia could not independently ascertain the claims made in the report, and there has been no immediate response to queries on the matter to the offices of top health ministry official Noor Hisham Abdullah and Muhyiddin.