After more than a decade of experimenting, a trio of Malaysian farmers say they have found the right concoction of nutrients and treatments to successfully grow Japanese muskmelons, one of the world’s most expensive fruits.

The farmers at Malaysian company Mono Premium Melon regularly rub the melons with a soft cloth or glove, a practice called “tama-fuki” said to enhance their flavour, and play classical music over speakers in the greenhouses, which is believed to stimulate growth.

“Every single Japanese melon that you see in our farm is almost like an artpiece,” said Seh Cheng Siang, director and co-founder of Mono, at the company’s farm in Malaysia’s administrative capital Putrajaya. 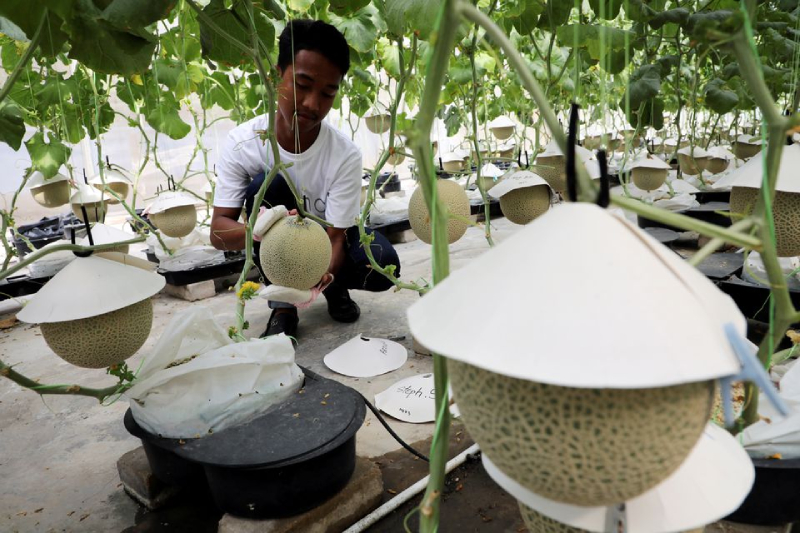 Since the last century, farmers in Japan have been perfecting the art of cultivating these melons, which are prized for their taste and precise spherical shape, and are sold in high-end shops as luxury items.

In attempting to match this quality, the farmers have had to contend with Malaysia’s hot and humid tropical climate, a world away from the more temperate conditions in Japan.

“We have to make sure that nutrition, the watering and the fertiliser are done very consistently and precisely,” said Seh, adding that they tried growing more than 10 varieties of Japanese melon, before they found the right one.

After bringing the melon seeds in from Japan, the Malaysian farmers travelled to Japanese farms to learn the cultivation methods to try and replicate them in Malaysia.

They also used trial and error to overcome challenges such as determining the optimal composition of the nutrition given to the melon plants.

Despite these obstacles, Mono’s first batch of 200 selected melons have sold out, thanks mainly to online sales.

The melons are sold for 168 ringgit (S$54.37) each, about a third of the price the Japan varieties normally go for.

“It’s pretty interesting to know that as a Malaysian, we can actually grow Japanese-grade melons in Malaysia,” said Elaine Chow, a customer who attended a recent event at the greenhouses.