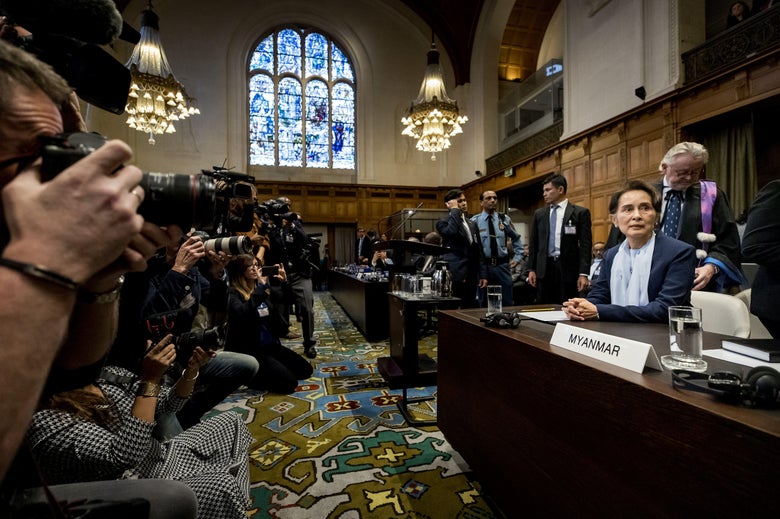 A Nobel Peace Prize is no guarantee of future performance.

In Oslo on Tuesday, Ethiopia’s reformist prime minister, Abiy Ahmed, was awarded the prestigious prize amid criticism that the recognition was premature: Ethiopia’s transition to democracy is far from complete and ethnic violence and dislocation are prevalent in his country.

As if to underline that Nobel laureates are as capable of violence and cynicism as any other leader, 1991 winner Aung San Suu Kyi, now the leader of the government of Myanmar, also traveled to Europe this week to appear before a court in The Hague and defend her government against charges of genocide.

As a campaigner for democracy and imprisoned dissident, Suu Kyi became a global icon of human rights and democracy in the ’90s. But in recent years, former supporters and admirers have watched, stunned, as she has stood lockstep with the military leaders she once fought against, even with overwhelming evidence that these leaders are carrying out a genocide that has killed more than 10,000 members of the Muslim Rohingya ethnic group and sent hundreds of thousands fleeing abroad.

Suu Kyi sat impassively on Tuesday in the International Court of Justice on Tuesday as witnesses described gruesome scenes of mass rape, the stabbing of children, and families being burned alive. On Wednesday, she took the stand. She called the charge of genocide “misleading” and described the military operation in Myanmar’s Western Rakhine state as a “clearance operation” launched in response to attacks by Rohingya militants on police.

For a time, as evidence of the genocide grew, some international supporters gave her the benefit of the doubt. While Myanmar elected its first civilian government in 2016, the military remained a powerful and independent institution. Suu Kyi was in a precarious position as a civilian leader sharing power with the military commanders who once imprisoned her. Perhaps speaking out about the abuses the military was committing was simply not politically viable. Perhaps she was working behind the scenes.

That’s a harder case to make now that she is actively campaigning on the world stage on the regime’s behalf. There was no requirement for her to fight the charge in person. She’s playing to her constituency back home.

“The international community now has to wake up. The government and military are acting in parallel,” says Tun Khin, president of the London-based Burmese Rohingya Organisation U.K. “The government systematically has cooperated to dehumanize our population and destroy it with intention. They have denied our citizenship. Denied our identity. Denied our right to have education. Denied the right to have food.”

He says Suu Kyi’s transformation has been as shocking for the Rohingya as for anyone else.

“We supported her as an icon for a long time. We believed that our country as a whole, Rohingya included, should get our democratic rights,” he says. “I campaigned for her release from prison for many years. Unfortunately, she is totally different. She has totally taken the side of the military. It is very surprising.”

The charge of genocide in this case were filed by Gambia, a small country in West Africa, with the support of the 57-country Organization of Islamic Cooperation. (Gambia is itself just emerging from a long period of repressive dictatorship.) Though the U.N. Human Rights Council has already concluded that Myanmar’s actions against the Rohingya constitute genocide, the court could still take years to issue its ruling. But Gambia has asked the court for “provisional measures” to protect the Rohingya under the 1948 Genocide Convention—a kind of restraining order obligating the government take action to protect the Rohingya. The ICJ itself doesn’t have many means to enforce such an order, but it could spur other U.N. bodies or national governments to pressure Myanmar to stop the killing. (The U.S. on Tuesday slapped sanctions on four Myanmar military leaders under the Global Magnitsky Act.)

The ICJ, the U.N.’s top court, generally rules on disputes between countries. It has ruled on one case of genocide before, finding in 2007 that Serbia was not directly responsible for genocide in Bosnia but did fail to prevent the killing. The ICJ is separate from the better-known International Criminal Court, also at The Hague, which prosecutes individuals for crimes under international law. A separate investigation by the ICC is ongoing. Because of jurisdiction issues—Myanmar is not a party to the ICC—that court can only rule on crimes involving people now in Bangladesh, where a majority of the refugees have fled and which is an ICC member. Myanmar doesn’t accept the ICJ’s compulsory jurisdiction either, but Gambia was still able to bring the case because both countries are parties to the Genocide Convention.*

More than 700,000 Rohingya have fled to Bangladesh since the “clearance operations” began in 2016 and 2017. They live in often dire conditions in refugee camps. The government of Myanmar has agreed to repatriate many of them, but most refugees are refusing to return. “The genocide is ongoing. How can people return?” asks Tun Khin.

The case could be a test for other nations following Myanmar’s lead. India’s Parliament is currently in the process of passing a citizenship bill that would effectively impose a religious test for migrants who want to become citizens, rendering thousands of Muslim residents stateless. The Indian government’s tactics have been frequently compared to the denaturalization of the Rohingya, whom the government consider illegal immigrants from Bangladesh, even though many have lived in the country for generations.

It may seem far-fetched to compare a vibrant democracy like India to a country that until recently was a totalitarian police state, but Suu Kyi’s testimony is a reminder that even a Nobel Prize–winning human rights activist can be complicit in some of the world’s worst crimes.

Correction, Dec. 11, 2019: This piece originally implied that Myanmar was under the ICJ’s jurisdiction because it is a U.N. member state. It is actually because it has ratified the Genocide Convention.