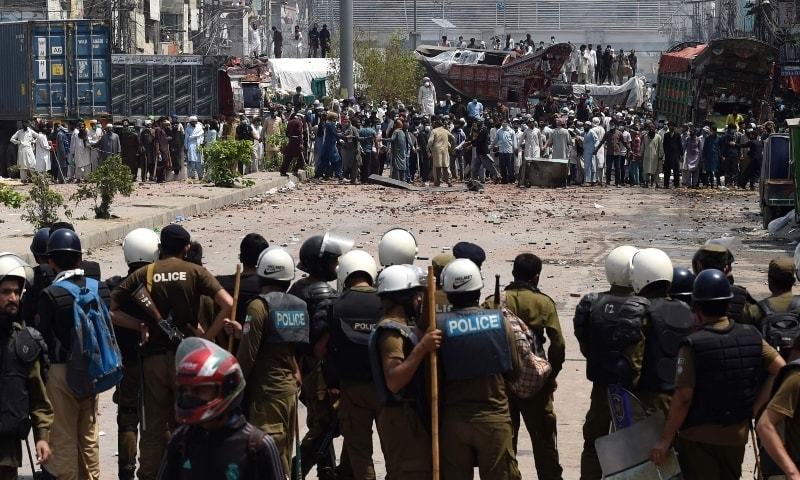 Interior Minister Sheikh Rashid in the early hours of Monday announced that after the first rounds of talks with the recently proscribed Tehreek-i-Labbaik Pakistan (TLP), 11 policemen who were taken hostage in Lahore have been released.

“Talks have started with the TLP. The first round went well and the second round will take place after sehri,” Rashid said in a video message. “They have released 11 policemen who were made hostages and have gone into the Rehmatul Lil Alameen Mosque [Yateem Khana Chowk]. The police have also stepped back.”

On Sunday, spokesperson for Lahore CCPO Rana Arif told Dawn.com that workers of TLP “brutally tortured” a deputy superintendent of police (DSP) and took him, as well as four other officials, hostage. Special Assistant to the Punjab Chief Minister on Information Dr Firdous Ashiq Awan, however, said the attackers had kidnapped 12 police officials, including the DSP, and taken them to their markaz.

Read: What does the TLP want?

Meanwhile, Mufti Muneebur Rehman, former chairman of the Ruet-i-Hilal Committee, late Sunday announced a nationwide strike against the government’s handling of the situation in Lahore and asked that businesses remain closed on Monday. He also appealed to all political parties to support the strike call.

Addressing a press conference, Muneeb demanded that the ban imposed on the TLP earlier this week be lifted and the arrested workers of the party be released.

“Until now, we have remained calm so that the government may come to its senses, but that does not seem to be happening,” he said, demanding that all arrested activists be granted bail on personal surety and all FIRs against them be cancelled.

Earlier on Sunday, Punjab police said the violence occurred after “miscreants” — an apparent reference to TLP workers — attacked a police station and abducted the DSP, adding that it acted only in “self-defence”.

“Today in the early morning, miscreants attacked Nawankot Police Station where Rangers and Police officers were trapped inside the police station and DSP Nawankot kidnapped and taken to the markaz,” the police said in a statement, referring to the TLP headquarters.

It added that “at least one oil tanker with 50,000 litres of petrol has been taken by the miscreants to the markaz.”

According to the statement, the miscreants were armed and attacked Rangers/police with petrol bombs.

Police officers hang on to an ambulance carrying their colleagues who were injured during a clash with TLP supporters in Lahore, Sunday. — AP

“Police and Rangers pushed them back and took back the possession of the police station,” it said, adding that police did not plan or conduct any operation against the mosque or the madressah.

“The action, if any, was in self-defence and to protect public property.”

An official report showed 15 injured police personnel were under treatment at different hospitals in the city. Arif said the security personnel were subjected to “brutal torture” by TLP workers.

Meanwhile, at least three protesters were killed and several others injured during the clash, according to the party’s workers.

A TLP spokesperson said the clash started when police launched an operation to clear the area around Lahore’s Yateem Khana Chowk, where workers of the banned party have been staging a protest since earlier this week.

In a video message, TLP spokesperson Shafiq Ameeni said that “[We] will bury [those killed] when the French ambassador exits the country and our agreement (with the government) is implemented.”

Videos on social media showed people carrying away the injured and tending to them.

TLP workers wielding sticks and stones also climbed atop the Orange Line Metro Train, while speeches were being made through the area mosque to call people for support, according to the city police spokesperson.

Roads leading to the TLP headquarters near Yateem Khana Chowk have been blocked.

Still, supporters of banned TLP have been sharing videos on social media of what they said were clashes on Sunday with police, and hashtags supporting the group were trending in Pakistan on Sunday.

The TLP also shared a video of a senior official of Punjab police, who was allegedly abducted by its workers on Sunday. The injured police official, assumedly under duress, said that an operation was being carried out to clear the area outside a police station when he was “captured” by the “enraged” crowd.

He said that three people were killed and several others sustained bullet wounds, appealing for a way forward through dialogue.

Commenting on the violence, Information Minister Fawad Chaudhry said the government “believes in negotiations but will not be blackmailed”.

He said the operation in Lahore was launched after police and Rangers personnel were abducted. “The state was not blackmailed by [the] banned armed group,” Chaudhry was quoted as saying on Twitter.

Meanwhile, Islamabad DIG Operations Afzaal Ahmad Kausar said security had been “beefed up in the whole city” and that heavy police contingents had been deployed at entry/exit points and other important installations.

“All possible steps would be taken for maintenance of law and order situation in the city,” he tweeted from his official account.

The TLP was formally banned by the federal government earlier this week after its supporters staged three days of violent protests across the country, resulting in deaths and injuries to several policemen.

Addressing a press conference in Islamabad on Sunday, Rashid said the situation in the area around Yateem Khana Chowk was “tense”, adding that the government would take a decision on disbanding the TLP and the matter would be taken to the cabinet by April 20.

“If [TLP] has to be disbanded, the law ministry and Attorney General [of Pakistan] will be working on this and a reference will be filed.”

When asked whether any negotiations were taking place between the TLP and the government, Rashid replied in the negative.

He said blasphemy was not acceptable to the government in any condition “but for the peace of this country and to remain alive in the world, [we] had to take some inevitable steps for which we were mentally not prepared”, referring to the ban imposed on the TLP.

Answering a question, Rashid said the government will make full efforts to ensure that all roads and highways remain open on April 20.

During the three days of countrywide protests, hundreds of protesters and police personnel were injured and thousands of TLP activists and supporters were arrested and booked for attacking law enforcement personnel and blocking main roads and highways in protest against the arrest of their leader Allama Saad Hussain Rizvi.

On Friday, Prime Minister Imran Khan also lauded the services of police for dealing with the “organised violence” perpetrated by the protesters.

In a tweet, the premier also announced that the government would look after the families of the four police personnel martyred during the violence.

“I want to pay special tribute to our police force for their heroic stand against organised violence intended to create chaos to blackmail [the] government,” he wrote, noting that four policemen were martyred and more than 600 injured during the unrest.

On Thursday, the government had slapped a ban on the TLP. A notification declaring TLP as a proscribed organisation was issued by the Ministry of Interior shortly after the federal cabinet approved a summary to ban the party.

The notification said: “The federal government has reasonable grounds to believe that the TLP is engaged in terrorism, [has] acted in a manner prejudicial to the peace and security of the country, [was] involved in creating anarchy in the country by intimidating the public, caused grievous bodily harm, hurt and death to the personnel of law enforcement agencies and innocent by-standers, attacked civilians and officials, created wide-scale hurdles, threatened, abused and promoted hatred, vandalised and ransacked public and government properties including vehicles and caused arson, blocked essential health supplies to hospitals, and has threatened, coerced, intimidated, and overawed the government [and] the public and created sense of fear and insecurity in the society and the public at large.”

Copies of the notification were sent to authorities concerned, including the secretaries of different ministries and divisions, State Bank governor, Election Commission of Pakistan secretary and director general passports.

The National Counter Terrorism Authority had also swiftly added the TLP to the list of banned terrorist organisations taking the total number of such outfits to 79.

With additional input by Reuters.