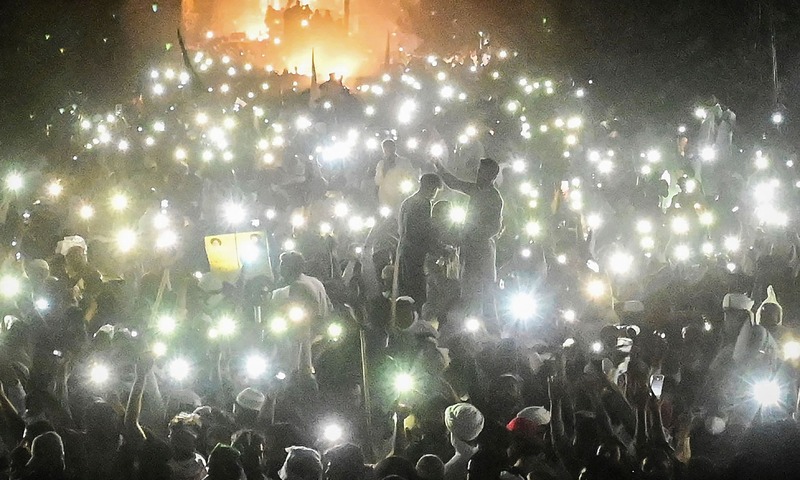 Three policemen were martyred and several others injured in clashes with workers of the proscribed Tehreek-i-Labbaik Pakistan (TLP) in Lahore, officials said on Friday.

In a statement, Lahore DIG (Operation) Spokesperson Mazhar Hussain identified two of the slain officials as Ayub and Khalid. The identity of the third official has not yet been ascertained, but a statement from the provincial chief minister stated that three policemen were martyred.

Hussain said that several others were also injured and taken to the hospital in critical condition. “Protesters also hurled petrol bombs on officials,” he said, adding that officials tried to prevent them from vandalising and damaging public property.

“The angry mob also used sticks and pelted stones,” he said, adding that officials were showing restraint despite the violence.

They had clashed with the police at several places in the city, he said. “They had assured us that they will remain peaceful but they turned violent,” he told Reuters.

A TLP media coordinator, Saddam Bukhari, said the police attacked the peaceful rally that was on its way to Islamabad.

In a separate statement, a spokesperson for the banned group said that workers had endured the “worst shelling in history” and were “attacked from all sides” near the Mao College Pul. The spokesperson claimed that 500 workers had been seriously wounded while 15 were in serious condition.

Meanwhile, Punjab Chief Minister Usman Buzdar offered condolences and prayed for the deceased officials. He assured their families that the provincial government stood with them in their time of grief.

The chief minister also directed officials to take strict action against those responsible for the incident. “Rule of law must be ensured at all costs,” he said, warning that no one would be allowed to take the law into their hands.

He also directed officials to ensure the best possible medical facilities for the injured policemen.

Shortly after 4pm on Friday, the Punjab CM announced that a committee comprising provincial Law Minister Raja Basharat and Prosecution Minister Chaudhry Zaheeruddin had been formed to negotiate with the proscribed group.

The chief minister said that according to the Sunnah of Holy Prophet (PBUH), “we all need to work together for peace and harmony in the country”.

However, as the violence erupted in Lahore, a statement issued by the proscribed group said that negotiations would not happen till TLP chief Saad Hussain Rizvi is released.

“They called us for talks, but attacked our workers from the back,” a statement by the group’s spokesperson said. He claimed that “thousands” were seriously injured and many had bullet injuries.

“Now, only the TLP chief will lead the negotiations,” the spokesperson said.

On Thursday, TLP leader Pir Ajmal Qadri had said that a “peaceful” procession would begin after Friday prayers. “If any hurdles are created, the party also has a Plan B to thwart any official attempts,” he had told a charged crowd at a protest site in Lahore.

In what appeared to be a change of heart, the group had delinked the march from the release of its incarcerated leader, Saad Hussain Rizvi, and said the purpose of the move was “respect for the Holy Prophet (PBUH)”.

Meanwhile, Lahore Chief Traffic Officer (CTO) Muntazir Mehdi said in a statement that traffic flow was as per usual on all entry and exit points of the city as well as on Ferozepur Road, Jail Road, Wahdat Road, Mall Road and Canal Road.

However, roads connecting Babu Sabu to Scheme Morr and Scheme Morr to Yateem Khana Chowk have been closed for traffic, while a protest by blind persons is under way at Secretariat Chowk, he said.

Citizens can contact the 15 helpline for more information, he added.

In a statement, a spokesperson for the Islamabad Traffic Police said traffic was diverted from Rawalpindi’s System Road and Ninth Avenue and advised residents who wanted to go to Pindi via the Faizabad Interchange — which has been blocked during TLP protests in the past as well — or Ninth Avenue to use the IJP Road instead.

“Diversion has been placed for both sides of traffic at Murree Road, Faizul Islam stop, from and to Faizabad. Alternatively, traffic going from Islamabad to Murree Road, Rawalpindi, is diverted to Islamabad Highway.

“Diversion has been placed for both sides of traffic from Express Chowk to D-Chowk at Jinnah Avenue. Alternatively, Nadra Chowk and Ayub Chowk can be used for entry and exit to the Red Zone,” according to the statement.

In addition, diversion has been placed for traffic from Islamabad Highway to IJP Rd at Sohan Stop. The traffic is diverted instead to Faisal Avenue, the statement added.

The metro bus service was suspended in Rawalpindi but was running from the stop on IJP Road to the Pakistan Secretariat, the spokesperson said.

Police sources said 24 TLP workers were arrested ahead of the march while officers who were on leave were called back to duty.

Senior police officers earlier told Dawn that about three dozen containers had been arranged to put on different roads, including Islamabad Expressway, to stop the TLP from entering the capital or staging a sit-in at Faizabad Interchange.

The containers were being brought to the Faizabad Interchange and put on the roads at midnight. Besides, well-equipped police personnel were deployed in and around the interchange.

Police were also deputed at the entry point of the capital at Tarnol, Rawat and Bhara Kahu. Moreover, containers were arranged to block the roads at these three points but a final direction was awaited from the higher authorities.

Over 2,000 police officials are being deployed at the main points, including the entry points, to counter the TLP’s march, the officers said.

The police lines headquarters released 1,500 anti-riot gear kits for the contingents to be deployed.

Meanwhile, the Rawalpindi Traffic Police completed arrangements to deal with the long march. In a statement, it said Murree Road and Rawal Road have been closed for commuters while Old Airport Road and Mall Road are open.

Additional policemen have been posted at the High Court Chowk and Mall Road to ensure the smooth flow of traffic, it said.

The TLP had resumed protests in Lahore earlier this week by staging a massive sit-in on Multan Road near its headquarters at Masjid Rehmatul-lil-Aalemeen.

Hundreds of activists and workers of the proscribed TLP participated in the sit-in to put pressure on the Punjab government for the release of its chief.

Rizvi is detained by the Punjab government since April 12 for “maintenance of public order (MPO)”. He was initially detained for three months and then again under the Anti-Terrorist Act on July 10. A federal review board is scheduled to take up the government’s reference against him on Oct 23.

A division bench of the LHC is yet to be constituted to hear an appeal of the government against a decision of a single bench that had set aside the detention of the TLP leader. The Supreme Court had on Oct 12 suspended the operations of the single bench’s order and remanded the case for a fresh decision by a division bench.

A day earlier, the Punjab police allegedly detained over 1,000 activists and workers of the TLP during a crackdown that was intensified across the province after the group announced the long march.

Dozens of fourth schedulers of the proscribed group were also among those taken into custody from all 36 districts of the province besides at least 40 in Lahore, an official privy to the development told Dawn.