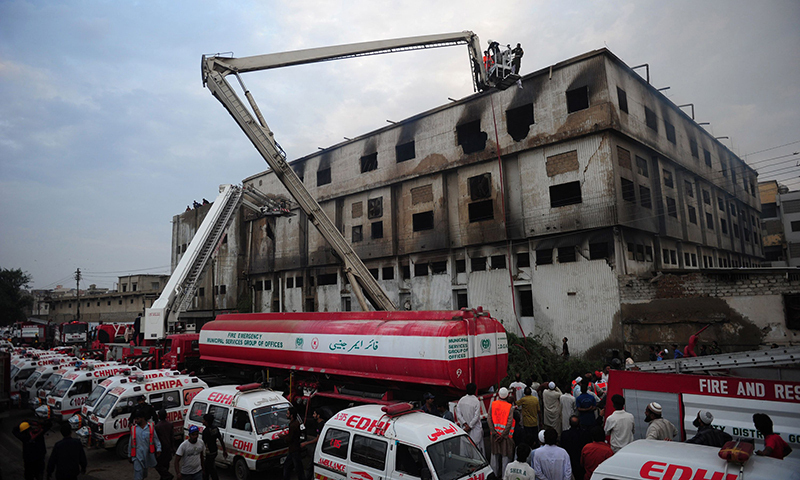 An anti-terrorism court (ATC) in Karachi is expected to announce its verdict on Thursday in the high-profile Baldia factory fire case against Muttahida Qaumi Movement (MQM) lawmaker Rauf Siddiqui and nine others, eight years after the deadliest industrial blaze in Pakistan’s history.

Over 260 workers were burnt alive when the multi-storey Ali Enterprises garment factory was set on fire in Baldia Town on September 11, 2012.

Analyse: 8 years on, have we learnt anything from the Baldia fire which claimed more than 260 lives?

They allegedly acted on the instructions of the then chief of MQM’s Karachi Tanzeemi Committee, Hammad Siddiqui, over the non-payment of Rs250 million ‘protection money’ by the factory’s owners.

Hammad and businessman Ali Hasan Qadri have been declared proclaimed offenders in the case as both are reportedly in hiding abroad.

The judge of the ATC-VII, who is conducting the trial in the judicial complex inside the central prison, is expected to conclude the trial and announce his verdict in the matter since the recording of evidence and testimonies of the prosecution witnesses, statements of the accused persons and final arguments from the special pubic prosecutor and defence counsel for the accused has almost been completed.

The prosecution had rested its case after recording material evidence including forensic, ballistic and chemical analysis reports and testimonies of 400 witnesses against the accused. The prosecution has since given up 369 witnesses for being “unnecessary”.

According to prosecutor Sajid Mehboob Shaikh, a total of 264 people perished in the fire that engulfed the multi-storey building of the readymade garments manufacturing unit. The number included bodies of 17 people who were charred beyond recognition.

All the accused persons have denied the allegations levelled by the prosecution, which is led by the Rangers instead of police.

However, the case took a new turn in February 2015 when the Pakistan Rangers Sindh submitted a joint investigation team (JIT) report in the Sindh High Court, which revealed that the factory was set on fire after its owners failed to pay Rs250m ‘protection money’. Subsequently, a reinvestigation of the case was ordered in March 2015 through a JIT.

In March 2016, police through a progress report informed the trial court that the factory fire was a planned “terrorist act” and the JIT had recommended that a new case be registered under the anti-terrorism law and proposed Hammad Siddiqui, his alleged frontman Abdul Rehman alias Bhola, businessmen brothers Ali Hasan Qadri and Umer Hasan Qadri, Dr Abdul Sattar, Iqbal Adeeb Khanum, Zubair alias Charya and others as accused in it.

However, after a lengthy reinvestigation, police filed a supplementary investigation report in August 2016 in which they only charge-sheeted Hammad, Rehman and their three to four “unknown” accomplices and did not recommend the 13 other suspects for trial.

But the court put all ‘discharged’ persons in the list of the accused by observing that the owners/manager had ordered the closure of the factory’s gates while others abetted the crime one way or another by extorting money on the pretext of distributing it among the victims’ families.

Later, the court partly recalled its order regarding the inclusion of the owners as accused after the prosecution said they were “key witnesses” in the case.

In December 2016, Abdul Rehman alias Bhola was brought back after his arrest in Bangkok through Interpol, and he recorded his alleged confessional statement before a judicial magistrate. In April 2017, police filed a supplementary charge sheet against Rehman.

According to the supplementary charge sheet, Rehman during interrogation as well as in his confessional statement before a magistrate disclosed that he had directed the accused Zubair alias Charya and others to set the factory ablaze on the instructions of Hammad Siddiqui as the factory owners had refused to pay the demanded protection money or ‘partnership’ in the factory.

He also alleged that after the incident, Rauf Siddiqui allegedly got a case registered against the owners of the industrial unit. Later, Rehman said he came to know that Rauf and Hammad received Rs40m to Rs50m from the owners to “tone down” the case against them. However, police had declared the MPA innocent in the supplementary report.

Thereafter, special public prosecutor Sajid Mahboob Shaikh filed an application and argued that police had not charge-sheeted Rauf but “sufficient” evidence was still available to connect him with the offence.

In January 2018, the trial court allowed the application and made Rauf an accused in the case.

The Qadri brothers, Dr Sattar and Khanum have been charged with using the money allegedly extorted from the factory owners on the pretext of compensation for the victims’ families while the gatekeepers have been booked for allegedly closing the exit points.