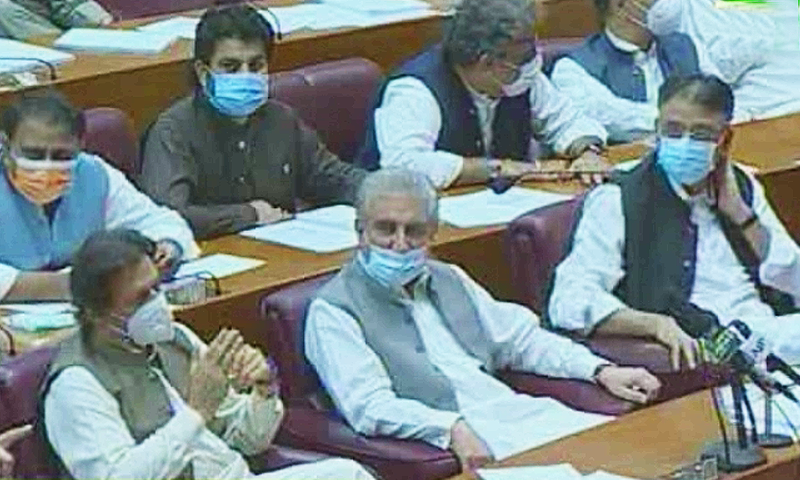 The National Assembly on Monday passed the Finance Bill 2020-21 with a voice vote, after debates and amendments. Earlier, the government defeated the opposition with 160-119 votes at the time of passage of clause nine of the bill.

The opposition did not insist for a vote at the final passage as it had already been defeated during clause-by-clause vote.

Prime Minister Imran Khan joined the session halfway as the speaker listed each clause and amendment. During the voting, a large number of members in the treasury benches started thumping their desks and chanting slogans in favour of the premier.

Asad Umar, taking to Twitter after the passing of the bill, said: “Tall claims made by the opposition and some sensationalist analysis by the media over the last few days and the result is that the 29-vote majority — through which last year’s budget was passed — has increased to 41 votes.”

He also congratulated all colleagues and workers of the PTI.

Earlier, while addressing the parliament, Minster for Industries Hammad Azhar said today’s session was meant to move amendments to the finance bill and pass it, yet the opposition was resorting to personal attacks.

He accused the opposition of shouting “na manzoor” (unacceptable) even before the budget was presented in the parliament.

“I expected there would be concrete arguments [today] but the opposition is making personal attacks — this is the level of their seriousness,” said Azhar, who was addressing the parliament after PML-N senior leader Khawaja Asif and PPP Chairperson Bilawal Bhutto Zardari.

Bilawal in his speech had lashed out at Prime Minister Imran Khan over his response to the coronavirus pandemic in the country.

He claimed the premier now has “only two options — either ask forgiveness from the public and the assembly for destroying the economy and putting peoples’ lives in danger or resign and let someone responsible take charge”.

Lawmaker Khawaja Asif said that the PTI government needed to be stopped from causing further damage. “They have increased the petrol price to Rs100 per litre. This will not only have an effect on petrol but they will now drop bombs on gas and electricity as well.

“This is because they have made commitments with liquidators to revise these tariffs. The budget is an interim document,” he alleged.

Opposition parties on Sunday had presented a united front in rejecting the federal government’s budget for the new fiscal year, lambasting the ruling PTI for being unable to provide people with relief during the coronavirus pandemic.

Soon after the press conference of opposition leaders, the PTI ministers had ter­m­­­ed the opposition stance an attempt to provoke people just for political point scoring.

Meanwhile, on Sunday evening, in an app­arent move to muster support, Prime Minister Imran hosted a dinner reception where he asserted that his government would complete its five-year term.

As many as 14 MNAs belonging to the Imran-led PTI, Pakistan Muslim League-Q (PML-Q) Baloch­istan National Party (BNP-Mengal), Pakistan Awami Muslim League (PAML) did not attend the dinner held on the lawns of PM House.

Due to the backdoor efforts of Speaker National Assembly Asad Qaiser, however, the missing 14 MNAs of the ruling party, including Haji Imtiaz and Nawab Karamat, turned up at the PM House after the dinner.

The PML-Q, despite its differences, decided in principle to vote for the passage of the federal budget 2021-21.

The decision to vote for the passage of the federal budget was taken at a PML-Q meeting, jointly presided over by Chaudhry Shujaat Hussain and Pervaiz Elahi at their Zahoor Elahi Road residence, on Sunday.