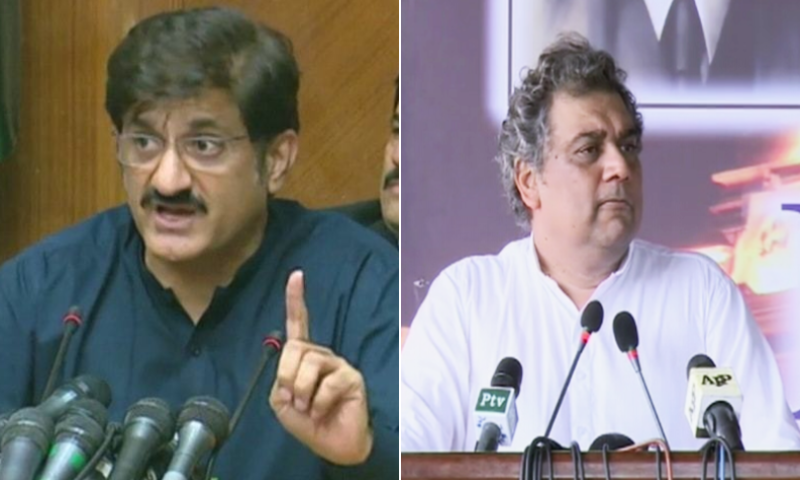 Sindh Chief Minister Syed Murad Ali Shah and federal Minister for Shipping and Maritime Affairs Ali Zaidi penned letters to Prime Minister Imran Khan seeking his intervention after a terse exchange between the two during a meeting of the Karachi coordination committee on January 16, it emerged on Saturday.

In a series of posts on Twitter, the federal minister detailed his version of what transpired in the Jan 16 meeting, saying he had “requested CM Sindh to include the devolution of organisations like [Sindh Building Control Authority] SBCA and [Sindh Solid Waste Management Board] SSWMB to divisional levels as committed by him months ago”.

Zaidi alleged the chief minister told him “I am not answerable to you” thrice at which he [Zaidi] walked out since “there was no further need for me to waste my time sitting in that meeting”.

Zaidi also posted a copy of the letter the Sindh chief minister had purportedly written to the premier over the altercation, complaining of the federal minister’s “unruly conduct”.

According to the copy of CM Shah’s letter to the PM shared by Zaidi — the authenticity of which was not challenged by Sindh Education Minister Saeed Ghani in a presser earlier today — Shah said Zaidi acted in a “hostile and belligerent manner” and that such conduct had been displayed by him in the past as well, which “was unbecoming of a citizen let alone a federal minister”.

Shah said through his letter he was registering his protest with the prime minister and expecting “some action”, adding that in the future he expected “maturity (to some extent), inter alia, will be seen as merit for appointments at such high positions”.

Claiming that Shah did not have the “etiquette & manners on how to address the office of the prime minister”, Zaidi also shared a copy of the letter he had written to the premier, responding to the “accusations of unruly behaviour”.

In his letter to the prime minister, Zaidi said the accusations against him showed “clear mala fide intent”, adding that the chief minister was answerable to the members of the committee.

Zaidi claimed the chief minister “consistently dodges the discussion of devolution” and that “his accusations are merely an attempt to evade accountability on the delays he and his government are indulging in deliberately”.

“The hypocrisy and incompetence of [Murad’s] government for over a decade has nothing to show except for loot and plunder,” he wrote, adding that the Centre had “gone the extra length” to help Shah improve Karachi’s infrastructure and assist in the province’s development.

“Is it not unforgivable and shameful that as a result of [Shah’s] machinations, a high-powered committee […] has had multiple meetings simply to discuss how to perform basic civic tasks such as cleaning garbage and storm drains?”

Zaidi maintained that no progress had taken place on basic issues, alleging that CM Shah had kept the committee “simply talking” to hide the “utter incompetence or malevolence of the Sindh government”.

In his letter, the federal minister also pointed out that it was not the Centre’s responsibility to continuously undertake civic tasks while the provincial government continues to evade its responsibilities.

“If the Sindh chief minister is not sincere and cooperative in resolving the issues of Karachi, then we will make no progress, and in the end the people of the city will suffer as the metropolis is allowed to decay under civic neglect.

“At the very least, we must demand that [Shah] fulfill the commitments made to you, the federal ministers and the nation on live TV to implement the Karachi development plan,” he wrote.

‘Zaidi not worthy of being a federal minister’

Meanwhile, Sindh Minister for Education and Labour Saeed Ghani said that the media should know by now who exhibited responsibility among those holding government offices.

Addressing the spat between the federal minister and the Sindh chief minister during a press conference in Karachi on Saturday, he said: “You are familiar with Shah’s political maturity and Zaidi’s political immaturity.”

Sindh Minister for Education and Labour Saeed Ghani speaks to the media in Karachi. — DawnNewsTV

Calling the entire incident an “unfortunate affair”, Ghani lamented how Shah’s letter to the prime minister was released to the media.

“I say on oath that I also hadn’t seen the letter before this. I knew there was a terse exchange. I don’t need to tell you who must’ve been the reason for it.”

The Sindh minister alleged that Zaidi had questioned Shah in an “inappropriate manner”. “When he didn’t find the answers satisfactory, [Zaidi] stood up and started screaming before leaving the meeting.”

Ghani said the Sindh chief minister does not typically tolerate such language but demonstrated “patience and strength”.

He did not respond, but he did address his grievances with Minister for Planning and Development Asad Umar — who is also part of the coordination committee — afterwards, he said.

Ghani claimed that other members of the meeting had witnessed the altercation while Umar himself was dismayed at the exchange and had expressed his disapproval to Shah.

In September last year, Prime Minister Imran Khan had unveiled a “historic” financial package worth Rs1.1 trillion for Karachi’s transformation to address the chronic municipal and infrastructure issues of the country’s financial hub.

The prime minister had said the federal and provincial governments would contribute to the package and formed a provincial coordination and implementation committee with all the stakeholders — mainly PPP, PTI and Muttahida Qaumi Movement-Pakistan — on board to promptly and swiftly resolve the issues of the city.

The move came after the city’s drainage and sewerage issues were brought into national focus last year after record-breaking monsoon rains caused widespread devastation and left dozens dead, paralysing life in the metropolis for several days.