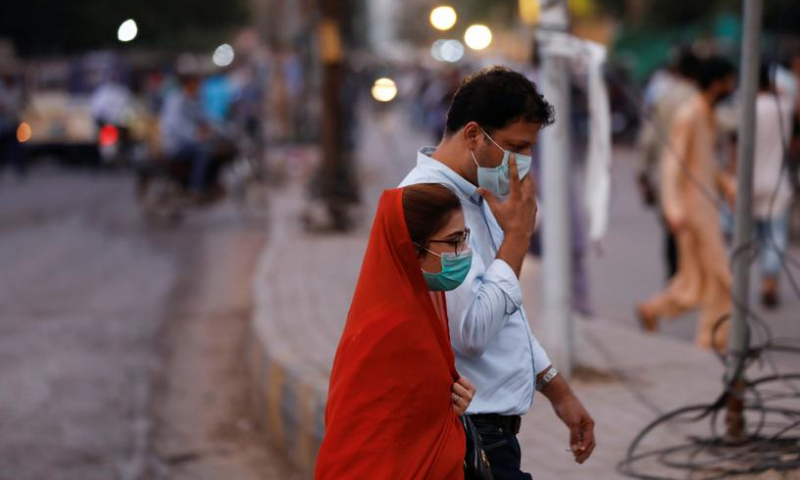 ISLAMABAD: As the country continues to see a drop in number of Covid-19 infections, health authorities on Wednesday announced that another variant of the deadly virus had managed to reach Pakistan.

The Japanese government, on the other hand, provided equipment worth $6.59 million to Islamabad through the United Nations Children’s Fund (Unicef) for enhancing national capacity for Covid-19 vaccine storage.

According to the data, the national positivity ratio remained 1.31pc, with 1,783 patients in critical condition.

“This variant had originated in California, which was why it was called the California strain or B.1.429,” Dr Akram said, adding that it later reached the United Kingdom and other European countries.

“Now we have been receiving cases in Pakistan,” he said, adding that so far five variants and seven mutations of Epsilon had been reported which made it more infectious.

“We need to understand that the virus has been controlled but not eradicated, therefore, there are chances of it bouncing back,” the task force member said.

Replying to a question, Dr Akram, who is also the vice chancellor of the University of Health Sciences, said around 40 patients had been confirmed in Pakistan having the strain through gene sequencing, but this was not an accurate figure. “Gene sequencing has not been done on every patient,” he added.

Dr Akram said the positive side was that all vaccines were effective against Epsilon, therefore people should get immunised and adhere to the standard operating procedures.

Meanwhile, the Ministry of National Health Services (NHS) and NCOC launched a video that explained how Covid-19 vaccine worked.

The video shows how the vaccine produced antibodies that acted like soldiers and protected the body from the virus.

“The vaccine does not become a reason for the disease rather it trains soldiers of the body to recognise Covid-19 and respond to the virus when it enters the body,” the video explained, adding that this was why a person experienced certain side effects after he or she received the vaccine.

Pakistan has received cold chain optimisation equipment worth $6.59 million, funded by the Japanese government and procured through Unicef, for enhancing national capacity for Covid-19 vaccine storage.

According to a statement issued by the NHS ministry, Parliamentary Secretary on Health Dr Nausheen Hamid received the equipment from Japanese Ambassador Matsuda Kuninori in the presence of Unicef Representative in Pakistan Aida Girma at a ceremony held in the National Emergency Operation Centre, Expanded Programme for Immunisation (EPI).

“We greatly value the significant contributions made by Japan during the last 70 years of its diplomatic relations with Pakistan,” Dr Nausheen Hamid said.

“Over the years, the two countries have partnered in various sectors, including health, education and power,” the parliamentary secretary said.

She further said the EPI in Pakistan had a strong cold chain system that was considered the backbone of the programme as it handled and stored massive quantities of vaccines, inclusive of all kinds of Covid-19 doses.

“It is, however, important to know that the cold chain system can be risky in countries which have extreme temperatures and the power supply is unreliable,” Dr Hamid said, adding that she was grateful to the Japanese government for providing the cold chain optimisation equipment for vaccine storage and “ensuring quality check as it would definitely strengthen our existing system”.

The equipment procured through funds from Japan include power generators, voltage regulators and temperature monitoring devices which will enhance vaccine storage capacity of EPI, especially at provincial and district levels where power outage and voltage fluctuation are frequent.

The new equipment would help ensure optimum temperature control in storage facilities and maintain the efficacy of the Covid-19 vaccine.

Japanese funds will also be used for strengthening the capacity of healthcare staff to handle the cold chain equipment.

Tokyo has extended a total of $23.5 million grant assistance to Islamabad for its counter-Covid-19 measures, including provision of hygiene items, medical equipment and training of healthcare staff.

Speaking at the event, Ambassador Matsuda said Japan had prioritised the health sector as part of its development cooperation policy for Pakistan for decades, including Maternal and Child Health, Polio Eradication, Routine Immunisation and Counter-Covid-19 measures.

He expressed his hope to open a new area of cooperation in future partnership with Pakistan in the health sector, suggesting that tackling diabetes could be one such sphere.

Unicef Representative Aida Girma said the ceremony reinforced the longstanding support of Japan to Unicef in its efforts to procure vaccines and essential equipment for strengthening immunisation services in Pakistan.