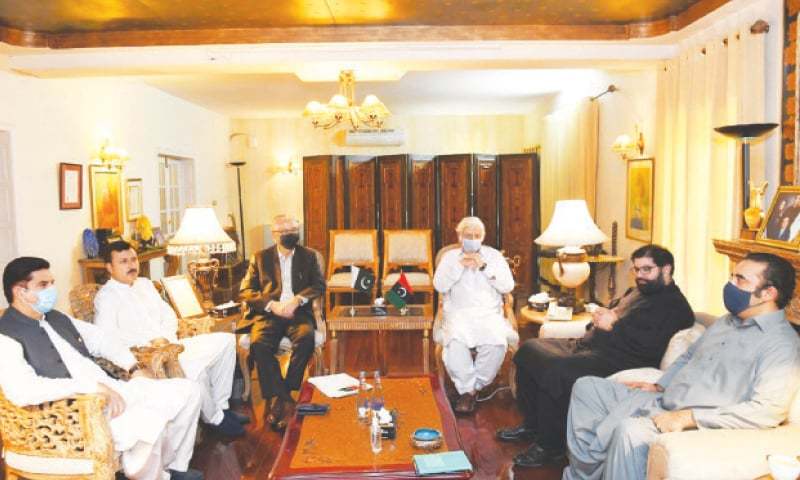 This was the first direct contact between the ANP and the PML-N, a major component of the Pakistan Democratic Movement (PDM), after the former’s decision to quit the opposition alliance along with the PPP over the issue of en mass resignations from the legislatures and the nomination of PPP’s Syed Yousuf Raza Gilani as the opposition leader in the Senate in March.

The meetings took place a day before the ANP’s Central Executive Committee (CEC) meeting that had been convened by the leadership mainly to discuss the regional situation in the wake of developments taking place in Afghanistan after the last month’s Taliban takeover.

Mr Khan, who is the president of the ANP’s Khyber Pakhtunkhwa (KP) chapter and son of party chief Asfandyar Wali Khan, first met the PPP chairman at Zardari House and then called on the PML-N president and Opposition Leader in the National Assembly Shehbaz Sharif at his official residence.

The media wings of the PPP and the PML-N released brief handouts regarding the meeting of the party leaders with Mr Khan, stating that the two sides reviewed the “overall political situation” in the country and expressed concern over the worsening economic conditions of the country.

“Both the leaders have agreed to continue mutual consultations,” said the PML-N handout.

Both the leaders criticised the government for unprecedented price-hike in the country and devaluation of the rupee against the US dollar.

The ANP leader, during his meeting with the PPP chairman, discussed the recently-held elections in the country’s cantonment boards. The two leaders also discussed the matters related to the Khyber Pakhtunkhwa province.

When contacted, ANP’s information secretary and former senator Zahid Khan surprisingly said that he was not aware of the purpose of the meeting.

He, however, said the party’s CEC would be meeting in Islamabad on Wednesday (today) to discuss a host of issues, including the situation in Afghanistan, the political situation in the country and the government’s controversial move to set up Pakistan Media Development Authority (PMDA).

In reply to a question, Zahid Khan said that the issue of rejoining the PDM was not on the agenda of the CEC meeting, but it could come under discussion, if raised by any of the participants.

Political experts are giving importance to the two meetings as these have taken place at a time when the PDM is planning to launch the second phase of its anti-government campaign.

Moreover, the common views on the PMDA issue have already brought the opposition parties closer and both Mr Sharif and Mr Bhutto-Zardari together came to the protest camp that had been set up by the journalists outside the Parliament House during the president’s address to the joint session on Monday.