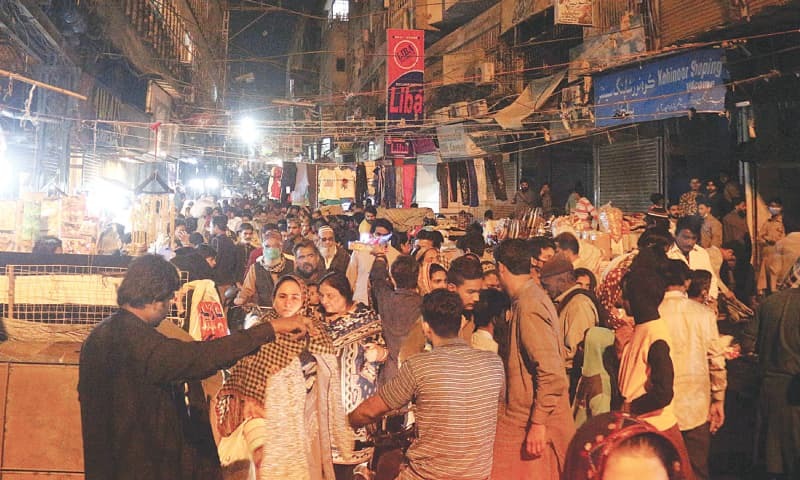 ISLAMABAD: Minister for Planning and Development Asad Umar on Tuesday feared that the country might face the worst coronavirus situation after two weeks if preventive measures were not strictly adhered to.

“We experienced a peak in Covid-19 cases in June and if we do not follow the Standard Operating Procedures (SOPs), we may face the worst situation in the next two weeks,” he said at a joint press conference with Special Assistant to the Prime Minister on Health Dr Faisal Sultan after a National Command and Operation Centre (NCOC) meeting chaired by PM Imran Khan.

“Today 1,750 people are on oxygen or ventilators in the county, but in June 3,400 were on ventilators. If we do not care, the worst situation can occur,” Mr Umar warned.

The NCOC made some important decisions endorsing a decision of the education minister regarding educational institutions, ban on indoor dining in restaurants and public gatherings, strict implementation of SOPs and engaging ulema for observance of SOPs in mosques.

Previously daily death toll was just six to eight but it has risen to 48 now, according to PM’s aide

He asked all parliamentary parties to attend a meeting of Parliamentary Committee on Covid-19 being held on Wednesday(today) in the Parliament House.

Although the opposition parties have announced that they will not take part in the committee’s meeting, the minister said: “I appeal to all parliamentary parties to attend the meeting because politics will continue but first we have to save the people’s life by unanimously deciding the future line of action to combat coronavirus.”

The minister said the government had started issuing warnings in early October as it had anticipated that the situation would worsen if SOPs were not strictly followed. “Last three weeks’ data of coronavirus reveals that we are heading towards the earlier worst situation,” he added.

Regarding implementation of SOPs in mosques, he said the federal government had asked the provincial governments to talk to ulema and Imams of mosques to ensure that the SOPs were followed in mosques. “We have seen that mosques had played an important role by following SOPs earlier this year but it has been observed now that preventive measures are not being followed even in mosques after the situation improved,” he said.

With 39,165 tests conducted across Pakistan, the positivity rate had reached 7.5 per cent, he added.

Dr Sultan said the second wave of covid-19 might be worse than the previous one. “In some countries third wave of the virus has struck,” he added.

He urged people to support the government’s efforts in effectively dealing with the second wave of Covid-19 by adopting all preventive measures against the disease.

All outlets at a mall in Saddar, Karachi, are closed in line with the government’s instructions. — Online/PPI

“Covid-19 case positivity ratio has risen to 7.50pc which was only 2pc when the situation was under control,” he said terming it an alarming situation.

The SAPM said the disease positivity ratio was observed with counting total number of positive cases per 100 persons.

Dr Faisal said violation of SOPs was the main reason behind this increasing trend as people had started ignoring all preventive measures.

He said during normal situation daily death toll from the disease was just six to eight while in last 24 hours the toll was 48 which was very high as compared with the past situation.

Dr Faisal said that many countries were facing second and third wave of the disease with more complications. “Pakistan is also facing same situation as in second wave the disease is spreading in the country rapidly,” he added.

The SAPM urged people to follow social distancing, use of face mask and other precautionary measures to stop increasing local transmission of Covid-19 in the country.

He said important decisions had been made in NCOC keeping in view the prevailing coronavirus situation in all provinces with an objective to ensure containing the disease. “There are threats of further increase in number of coronavirus cases throughout the country which can increase load on the already overburdened health system,” he said, adding that citizens should ensure adopting safety measures to protect themselves.

The PM’s aide said the government had adopted an effective strategy to combat Covid-19 in the country as present facts and figures of the disease showed increasing trend of coronavirus on which the government had taken measures for prompt response.

The strategies, he said, were bring prepared to control coronavirus keeping in view the global information and focusing on data with integration of local data in a scientific way and input from stakeholders was also considered to avoid any missing aspect.