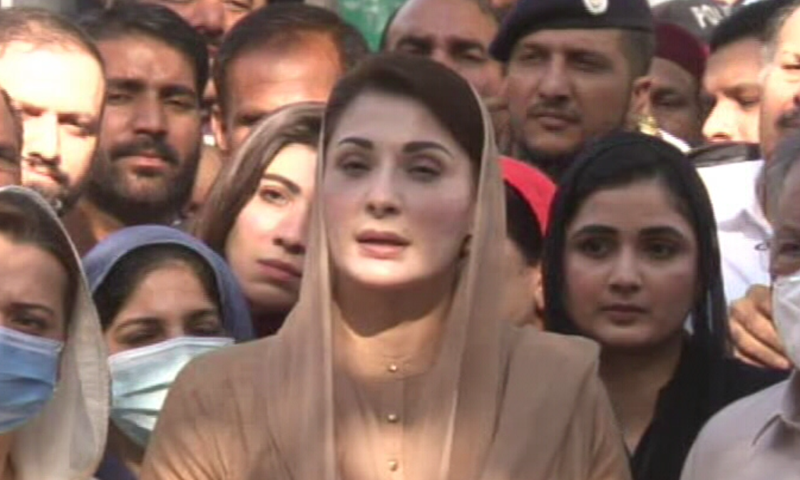 The lawyer for PML-N Vice President Maryam Nawaz told the Islamabad High Court on Wednesday that the legal procedure was not followed in the Avenfield apartments reference, which he said was not based on any evidence and saw numerous mistakes being committed at the pre-trial stage.

A two-judge bench, comprising Justice Aamer Far­ooq and Justice Mohsin Akh­tar Kayani, had taken up an appeal filed by Maryam against her conviction in the Avenfield properties case, in which she claimed that she had been persecuted at the behest of “certain people”.

Advocate Irfan Qadir argued on the maintainability of Maryam’s latest application, in which she had sought to present “extremely relevant, simple and clear-cut facts” to support her appeal against the conviction.

He said “numerous” mistakes had been made during the pre-trial stage of the case and that there were many irregularities in the case proceedings.

Qadir said although the National Accountability Bureau (NAB) had first filed an application seeking the conclusion of the appeals within 30 days, it had now filed a request seeking cancellation of Maryam’s bail.

As Qadir criticised NAB’s policy to readily arrest suspects, Justice Farooq remarked: “These days NAB arrests anyone, whether there is any proof against them or not. Now NAB officials function like a thana (police station) too.”

Qadir informed the court that Maryam’s new application had talked about political engineering in her case, saying “certain incidents took place which gave rise to many doubts and suspicions.”

The counsel argued that the accountability court did not have the authority to hear the Avenfield case. “This is a case in which no evidence exists,” he said, adding that the legal procedure had not been followed in the case.

He noted that in a criminal case, the benefit of even the smallest doubt was given to the suspect. “In the Avenfield reference, there is not little but a lot of doubt,” he remarked.

Reading out the charges in the reference, Qadir said Maryam had been accused of being a beneficial owner of the Avenfield flats in London.

Referring to a document signed by Maryam written in Calibri font, the lawyer said: “A lot of people made fun of the Calibri font [issue]. Today I will tell you its reality as well.”

Maryam was declared the beneficial owner of the properties based on a trust deed, Qadir said, adding that a “big mistake” had been committed by the Supreme Court, accountability court, Panama Papers joint investigation team and the NAB.

According to the counsel, the Sharif family was “very wealthy” even before Nawaz Sharif entered politics. Qadir questioned how this case was turned into one about a public officeholder.

Justice Kayani sought the document showing the ownership of the Avenfiled flats, to which Qadir responded that no document existed that showed Maryam and Nawaz as the apartments’ owners.

After hearing Qadir, the court directed the NAB to present its arguments at the next hearing. The case was adjourned until November 17.

Last week, the IHC had overruled admi­n­istrative objections raised by the registrar office on Maryam’s application seeking to place factual records before the court to substantiate her claim that she had been dragged into the Avenfield apartment reference and subsequently convicted not because of legal grounds but for other reasons.

However, the court had observed that it would decide the maintainability of the application aft­er hearing the NAB.

On Tuesday, the NAB filed a petition in the IHC, seeking cancellation of the bail granted to Maryam and her spouse retired Capt Mohammad Safdar in the Avenfield reference.

Addressing the media outside the court premises today, Maryam fired a broadside at Prime Minister Imran Khan, saying he should not try to become Nawaz Sharif who she said was elected as premier after years of struggle.

Without naming anyone, Maryam said the entire country was suffering “because you want to retain one person who runs your government”.

She also accused the premier of “hijacking” Nawaz’s mandate that he had acquired through public trust.

The PML-N vice president underlined that her party wanted to undertake a joint endeavour with people to bar the entry of people like Imran Khan into politics in future.

Maryam said Pakistan was bound to become an object of universal derision due to the tactics through which the country’s affairs were being run.

“God help the country of 220 million people when its decisions are being taken through such tactics,” she added.

During her tirade against the PTI government, she claimed that “magic” also played a role in how Prime Minister Imran was running the country.

She said the government must divert its focus to resolve public issues and growing inflation that had taken a toll on the masses.