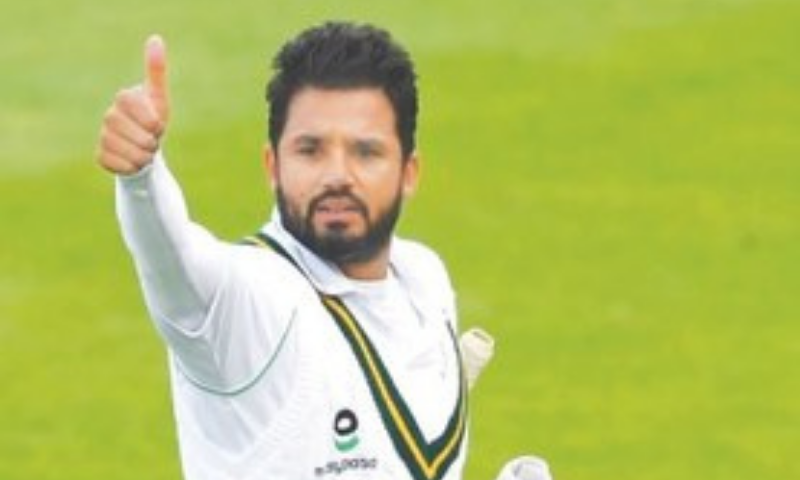 KARACHI: Senior Pakistan batsman Azhar Ali on Friday urged the brigade of young players to shed the dreaded feeling of self-doubt if they aspire to make themselves worthy for international cricket, and there is no better place than home to make a name for themselves and the country.

“The best thing for the youngsters is most of them are in the squad because of their successful stints in the domestic competitions. Playing on familiar pitches and environment are two key elements that really matter,” Azhar said while addressing a virtual media conference after the Pakistan squad continued their preparation for next week’s first Test against South Africa here at the National Stadium.

“I am very hopeful the young guys will make good use of the opportunities coming their way during the South Africa series. We have already developed a positive vibe with these upcoming players who are not overawed by the pressure that can really overstretch them.”

Azhar — who is the most experienced member of Pakistan squad with 83 Tests and the highest run-getter (6,302, 17 centuries, average 42.87) — observed playing at home is a big plus for any team.

“Asian teams generally struggle playing in countries like England, New Zealand, Australia and South Africa because the playing conditions at times are pretty opposite to what we get here [at home].

“We mustn’t also overlook the fact international cricket — particularly the Test format — has just returned to Pakistan after a long gap and our players have been facing a number of issues whenever we go overseas. It is not a rocket science to assume that Pakistan would hit the straps instantly because international cricket is always a challenge,” Azhar stated.

“There have been many examples of our struggles during away series because we are brought up in a different environment altogether. Pressure will remain to no matter whoever is playing. The biggest challenge is how a young player handles the pressure. In case of failures, the mind is filled with insecurities and fear of being axed prematurely.

“My message to these youngsters is: soak up pressure and learn how to handle it in various situations. But the chronic issue of insecurity is there since there is a yawning gap difference between international and [our] domestic cricket. As a senior player my simple advice to them is to have faith in themselves, trust their skills and stick with what they are doing in order to perform well.

“And if they feel comfortable skill-wise then that would automatic give them the confidence they require to avail the best chance to perform on international stage.”

Azhar, the 35-year-old right-hander from Lahore, sounded optimistic that Pakistan will compete with South Africa and return to winning ways after losing the last two series — in England and New Zealand.

“The end results always count and we lost matches because the team was not playing collective cricket. Pakistan just had two centuries [Azhar’s own unbeaten 141 during the last Test at Southampton in August and Fawad Alam’s heroic 102 at Mount Maunganui last month],” Azhar, who was succeeded by Babar Azam as Test captain after the England tour, stressed.

“But I’m sure players gain in confidence while competing on home territory because they know how the pitch would behave during the match and so. There is always a different level of pressure when we go overseas because the ground reality is that everyone back home expects nothing less than a win.

“So as a team we should take complete responsibility and try to win matches at home. The chance of playing back home is something extremely positive because after South Africa there are tours to Pakistan by England, New Zealand and Australia over the next 12 to 14 months.

“I rate South Africa highly because they come at you hard. But we will try to be as much competitive as we can and maximise this opportunity [of playing at home] to keep South Africa under pressure,” Azhar insisted.

The former captain further noted the presence of National High Performance Centre’s coach Mohammad Yousuf alongside batting coach Younis Khan is a blessing in disguise because the youngsters are taking advantage of their presence at the ongoing camp.

“Imagine the wealth of experience these two legends bring to the table. The young members in the squad are keen on learning finer points and both these great batsmen are preparing us for the Test,” Azhar pointed out.