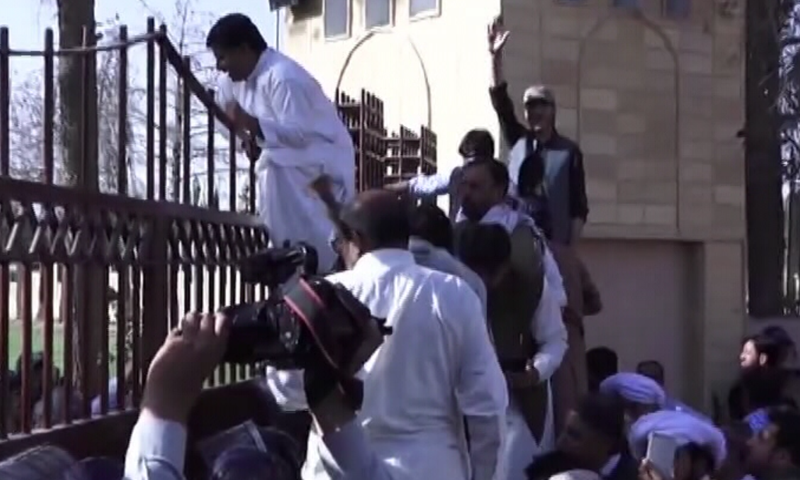 The budget session in the Balochistan Assembly commenced at least two hours after the scheduled time on Friday, amid protests by opposition lawmakers over what they claimed as unfair distribution of funds.

Earlier, at least three lawmakers, identified as Shakeela Dahwar (BNP), Babu Raheem (BNP) and Wahid Siddiqui (JUI), were injured as opposition members and their supporters blocked access to the Balochistan Assembly premises to prevent the presentation of the provincial budget for the new fiscal year.

Scheduled for 4pm, the budget session could not commence as opposition members locked up the assembly gates and prevented administrative officials from opening the gates.

Meanwhile, the opposition members and their supporters also clashed with police personnel, who attempted to disperse the crowd and open the gates so that the session could commence. A police armoured personnel carrier (APC) also crashed into the gate of the MPAs’ Hostel as it tried to clear the entry point.

After some time, the police finally managed to clear the main gate, from where the treasury lawmakers were ushered into the building so that the session could begin.

At the same time, MPA Sana Baloch told Dawn.com that the opposition lawmakers were conducting their own meeting in the chamber, which would decide whether to register an FIR against the provincial government over the police action against the protesters.

Meanwhile, Balochistan government spokesperson Liaquat Shahwani said in a statement that no constituency had been ignored in the budget proposals. He added that multiple development projects such as Sariab Road had been launched in opposition constituencies.

Later, while speaking to Dawns News, Shahwani railed against the opposition’s claims, saying they were “completely wrong”. He said the government had tried to negotiate with the protestors and not disturb their camps but they began blocking roads.

“Today they crossed limits,” he said, adding that the opposition had attacked the assembly which they had themselves called to be respected and sanctified. Shahwani said the siege was an attack on democracy, democratic norms and Balochistan’s traditions.

Why is the Opposition protesting?

The opposition members, comprising lawmakers from the Jamiat Ulema-e-Islam, Balochistan National Party-Mengal, Pashtunkhwa Milli Awami party and independent candidates, have been protesting for four days over the alleged neglect of their constituencies in the budget.

A day earlier, opposition parties had blocked national highways passing through many cities and towns of Balochistan, including Quetta, Chagai, Washuk, Kharan and Nushki in protest against what they called the government’s act of ignoring their proposed development projects in the provincial budget.

They had also announced that they would lay siege to the assembly building on Friday (today) and would not allow any MPA to enter the building and present the budget for 2021-22 if their proposed development projects were not included in the provincial Annual Development Programme.

All kinds of traffic, including passenger coaches, trucks carrying Afg­han transit goods and Nato supplies had remained suspended for at least sev­en hours. Hundreds of trucks, coac­hes, buses and other vehicles were str­anded at various entry and exit points of Balochistan.

The protesters had chanted slogans against the provincial government and alleged that non-elected politicians were being granted funds and members of the provincial assembly from the opposition were being ignored just because they did not belong to the ruling party. They demanded equal funds for all districts of Balochistan.

This is a developing story that is being updated as the situation evolves. Initial reports in the media can sometimes be inaccurate. We will strive to ensure timeliness and accuracy by relying on credible sources such as concerned, qualified authorities and our staff reporters.