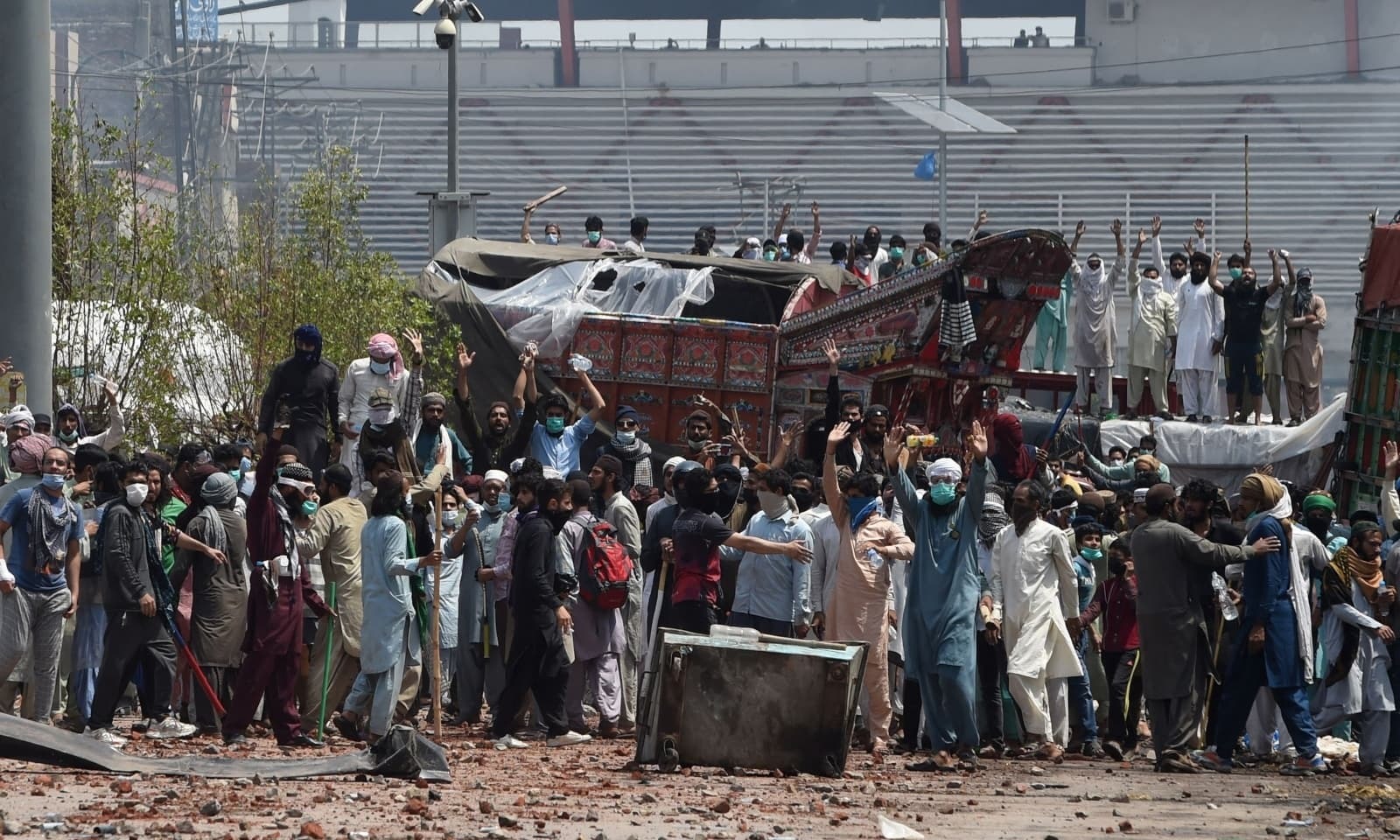 A look at the demands put forward by the group, its negotiations with the government and the violence that ensued.

Protests erupted across major cities in Pakistan on April 12 after the now-proscribed Tehreek-i-Labbaik Pakistan (TLP) chief Saad Hussain Rizvi was detained by security forces in Lahore as a “pre-emptive measure” ahead of the party’s April 20 deadline to the government.

The deadline pertains to the party’s demands from last year; in October, a history teacher who had shown blasphemous sketches of Prophet Muhammad (peace be upon him) in class was decapitated and his assailant shot dead by French police as they tried to arrest him. In the days that followed the beheading, the caricatures were projected onto the facade of a building in one French city and people displayed them at protests around the country.

Following the killing, French President Emmanuel Macron criticised Islamists and vowed not to “give up cartoons” depicting Prophet Muhammad. Prime Imran Khan as well as other leaders of Muslim countries had denounced the French premier’s comments while countrywide protests were held calling for boycott of French products.

Here, Dawn.com looks at the demands put forward by the TLP after the publication of the blasphemous caricatures in France and a timeline of its negotiations with the PTI-led government and the ensuing violence that led to the party being banned:

The TLP rally makes its way down Sharea Faisal. — AFP

TLP stages a big rally on Sharea Faisal in Karachi, demanding cutting of diplomatic ties with Paris and a boycott of French products.

The TLP asks the federal government to take “practical steps” otherwise it would be compelled to take “extreme action”.

The rally is led by then-TLP chief Allama Khadim Hussain Rizvi, who urges the federal government to “declare jihad” against France.

TLP announces the ‘Tahafuz Namoos-i-Risalat’ march from Liaquat Bagh Rawalpindi to Faizabad in Islamabad on November 15.

Talks between the capital administration and TLP leaders start while the party seeks security cover for the protest rally.

A team of administration officers try to convince the TLP leaders and organisers of the rally to call it off due to Covid-19 spreading all over the country, including Islamabad.

Blockades are installed at different entry points of the capital, including Faizabad, with the deployment of police and the paramilitary force to stop the protest rally of TLP from entering the city.

Meanwhile, police and other law enforcement agencies detain 181 leaders and activists of the TLP in different parts of Rawalpindi and send 65 of them to Adiala jail after producing them in courts.

Liaquat Bagh presents a scene of a battleground as police and stick-wielding activists of TLP clashed throughout the day.

The protesters, whose number was officially given at about 3,000, manage to reach Faizabad Interchange where they stage a sit-in.

Riot police resort to teargas shelling against the stone-pelting protesters. During the clashes, dozens of police personnel and several TLP activists are injured and shifted to hospitals.

“Heavy teargas shelling also affected residents of the adjoining areas with many complaining of difficulty in breathing,” a resident of a locality near Liaquat Bagh says.

TLP announces that the government accepted all its four demands and releases a copy of the handwritten agreement carrying signatures of Minister for Religious Affairs Pir Noorul Qadri, Interior Minister Ijaz Shah and Islamabad deputy commissioner.

The agreement says government will

There is no immediate confirmation from the government of the agreement, but the interior ministry issues a notification regarding immediate release of all those arrested during the past two days from different parts of Punjab.

Activists and supporters of TLP gather for the funeral prayer of Khadim Hussain Rizvi in Lahore. — AFP

The party’s new young leader, Hafiz Saad Rizvi, is appointed as his father’s successor shortly after the death of TLP founder Allama Khadim Rizvi on November 19, 2020.

In the first week of the new year, TLP threatens to relaunch its protest if the government does not fulfil its promise of expelling the French ambassador by Feb 17.

“We’re bound to honour the agreement till Feb 17. A war for (protecting) the honour of the Prophet (SAW) has been waged. If someone has some misunderstanding, it must be removed as we pledge that there shall be no delay in taking a decision after February 17,” the newly appointed leader of the TLP says at the chehlum of his father.

“If you have forgotten the promise, see our history […] You’ve got time until Feb 17 to expel the French ambassador,” Saad warns the government while addressing thousands of the TLP workers attending the chehlum.

Prime Minister Imran Khan also says that as decided in the renewed agreement, his government would take the matter to parliament before April 20. The prime minster reminds the TLP that it must not forget that no one has done more than him to internationally highlight the issue of blasphemy, not because of the TLP but because it was an article of his faith.

According to the TLP, the government team expressed its inability to “implement” the agreement and wanted the TLP leadership to stop protesting. “The TLP, however, refused to budge and warned the government to act or risk protest,” says party.

After protracted rounds of negotiations, the government team agrees to meet all the demands by April 20.

TLP naib emir Syed Zaheerul Hassan Shah says the government “completely deviated from” the agreement it had reached with the TLP regarding Namoos-i-Risalat.

Shah calls upon TLP leaders and workers to “come out on the roads” in their areas in protest against the government action.

TLP member Khalid Awan tells Dawn that government had “turned back on its promise” to expel the French ambassador by April 20 and took Rizvi into custody.

“We will not step back from our mission because of Saad Rizvi’s arrest.”

At least one police constable is martyred and 40 other personnel injured in Lahore as violent protests continue for a second day.

Life in capital returns to normalcy as the local police succeed in removing TLP activists from Barakahu, Tarnol and Rawat.

The federal government formally bans TLP as death of martyred police official rises to four while the French embassy in Pakistan advises all French nationals and companies to temporarily leave the country.

A notification declaring TLP as a proscribed organisation says government “has reasonable grounds to believe that Tehreek Labbaik Pakistan is engaged in terrorism, acted in a manner prejudicial to the peace and security of the country, involved in creating anarchy in the country by intimidating the public, caused grievous bodily harm, hurt and death to the personnel of Law Enforcement Agencies and innocent by-standers […] blocked essential health supplies to hospitals, and has used, threatened, coerced, intimidated, and overawed the government [and] the public and created sense of fear and insecurity in the society and the public at large”.

“They did not want to step back from their agenda for April 20 at any cost.”

“It is requested that immediate action may be taken on the subject matter,” the ministry directs the PTA chairman, after which the PTA releases an official statement saying: “In order to maintain public order and safety, access to certain social media applications has been restricted temporarily.”

Later, in a video message, Sheikh Rashid apologises to the public for the hours-long blockage of the applications, saying the government will “try not to [restrict] social media in the future”.

Security personnel walk back after having a talk with TLP supporters during a protest along a blocked street in Lahore. — AFP

Police say the violence occurred after “miscreants” attacked a police station and abducted the DSP, adding that it acted only in “self-defence”.

An official report shows 15 injured police personnel under treatment at different hospitals in the city. Meanwhile, at least three protesters killed and several others injured during the clash, according to the party’s workers.

Header image: Supporters of Tehreek-i-Labbaik Pakistan gather as they block a street during a protest in Lahore on April 18. — AFP