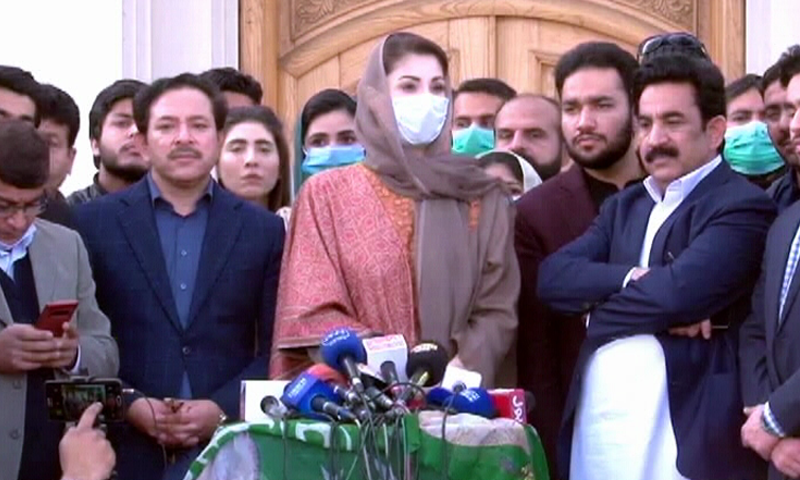 PML-N Vice President Maryam Nawaz on Wednesday once again called upon retired Supreme Court judge Azmat Saeed Sheikh to recuse himself from the inquiry into the Broadsheet scandal, warning that her party would otherwise reveal details about his past affiliations.

She was addressing the media after arriving at ‘Khokhar Palace’ to express solidarity with the Khokhar family following the demolition of their property.

“Broadsheet is a fraudsheet,” she said, adding that the case was not a new tactic of the government to trap the PML-N but “an old net with very big holes”. She reiterated the questions raised by her party recently about Justice Sheikh’s past affiliations with the National Accountability Bureau, Broadsheet and the PTI.

On Monday, the government had confirmed Justice Saeed as the sole member of the inquiry commission tasked with probing the scandal.

“Justice Azmat Saeed should excuse himself from this [investigation] and admit that he was himself involved in it (Broadsheet case),” she added.

If he does not recuse, Maryam said, the PML-N “would have to bring to light facts which we could not previously”.

She alleged that Justice Sheikh had “personally called and tried to threaten officers of the PML-N government at the time” and sent certain “messages”. “It is [therefore] better for you to excuse yourself,” Maryam told the former judge.

Speaking about the demolition of properties belonging to the family of PML-N leaders MNA Afzal Khokhar and former MPA Saiful Malook Khokhar in Lahore, Maryam alleged that Prime Minister Imran Khan had himself monitored and overseen the operation.

The Punjab government had on Sunday demolished several structures around houses of the Khokhar brothers and their relatives near Johar Town in a day-long operation.

The operation was widely condemned by the PML-N as an extreme action to punish supporters of the opposition Pakistan Democratic Movement. The Lahore High Court (LHC) on Tuesday restrained the district government from further demolishing Khokhar Palace among other properties and directed both sides to approach the civil court for the resolution of the dispute.

“I have come to know that this person whose name is Imran Khan, personally sat down and was monitoring the operation,” Maryam alleged, saying this measure had come after attempts to pressurise the Khokhar brothers and holders of political office in the PML-N.

“They were pressurised; in every party demonstration they were told to differ from the position of the party leadership or leave the party and cease participation in activities,” the PML-N leader said, adding that they were also “threatened”.

“When they refused to abandon the party leadership and Nawaz Sharif then this retaliatory action was carried out against them.”

Strongly condemning the demolition, she said the “rule of injustice” could not prevail. She stressed that the PML-N “stands united” in the face of “injustice and revenge” and by refusing to abandon Nawaz’s cause, the party for the first time in its history had refused to “bow down before injustice” and the incumbent government.

“This is a historic failure which Imran Khan and his supporters had to face,” said Maryam, adding that the PML-N’s roots were entrenched deeply into the “nation and the whole of Pakistan”. In contrast, she said, the “PTI has no such thing, it is a one-man show and when that person [Imran Khan] weakens then this party will shatter and scatter.”

Maryam claimed that in the next general elections, “no one will be ready to take a ticket of the PTI and you will see that they can’t do a demonstration or go amongst the people […] the upcoming events for them should compel them to look at their own party and leave the PML-N.”

The structures razed during the operation included houses of Akmal Khokhar and Tahir Javaid (close relatives of Afzal Khokhar and Saiful Malook), a market, back walls and shanties temporarily made by the workers.

The operation started at 6am on Sunday after a team accompanied by police officials reached the spot with heavy machinery. The police encircled the area and helped the team to complete the operation that continued for about 11 hours. A number of locals had gathered on the spot and witnessed the operation. According to the city district administration, the team retrieved 38 kanal land from the illegal possession of the Khokhar brothers.

None of the Khokhar brothers or their family members offered resistance to stop the operation. Saiful Malook claimed that the Supreme Court had already given verdicts in their favour. “There are 13 stay orders on this land issued by the courts,” he said at the time, criticising officials for not allowing them to enter their houses.

Afzal Khokhar lambasted the institutions for, what he termed, becoming a part of political victimisation. “We are being punished for standing by Nawaz Sharif,” he said.

LHC Chief Justice Muhammad Qasim Khan later on Tuesday suspended a directive of Lahore’s deputy commissioner about bulldozing the palace and further restrained the Khokhar brothers from reconstructing the demolished property till a decision from the civil court.

Answering a question about PPP chairperson Bilawal Bhutto-Zardari’s suggestion of moving a no-confidence motion against the government, Maryam said she could not decisively say anything until the matter was brought up in a meeting of the PDM. If Bilawal considers such a step to be viable, she said, then he should “show numbers if he has them”.

“We should wait for the PDM meeting where he puts it in front of the PDM and we will decide the issue.”

She also extended her well-wishes and congratulations on the wedding of Bakhtawar Bhutto-Zardari.