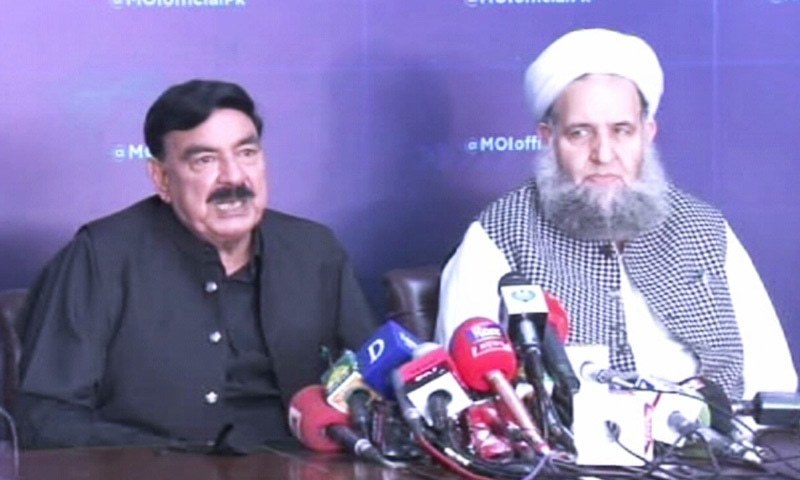 The federal cabinet on Thursday approved a summary to ban the Tehreek-i-Labbaik Pakistan (TLP), whose supporters staged three days of violent protests across the country this week after the arrest of their leader.

Addressing a press conference after a cabinet meeting, Interior Minister Sheikh Rashid said a notification for TLP’s proscription would be issued shortly.

The government will also take measures for TLP’s dissolution, Rashid announced, saying a separate summary will be moved in the cabinet in this regard tomorrow. He said after the summary’s approval in the next two to three days, a reference will be filed in the Supreme Court for the party’s dissolution.

The minister said the government had “tried its best” to resolve matters through negotiations but TLP’s “intentions were very horrifying. They did not want to step back from their agenda for April 20 at any cost.”

He lauded the services of police and other law-enforcement personnel to restore peace, saying as many as 580 police personnel had sustained injuries and at least 30 cars had been destroyed during the violence.

The government had announced it would move to ban the TLP, whose leader had called for the expulsion of the French ambassador, on Wednesday. Saad Rizvi was detained hours after making his demands, bringing thousands of his supporters to the streets in cities across Pakistan.

Speaking alongside Rashid, Minister for Religious Affairs Noorul Haq Qadri said he had been engaging with the TLP for the past two years and it was the government’s effort to bring it into the system as a “mainstream political party”.

He said the government had never backtracked from its commitment to present a resolution in the National Assembly, adding that it was proposing a draft whose diplomatic repercussions would be minimum and which would not push the country into an international crisis.

Govt moves to ban TLP after reign of terror

During the past three days, half a dozen people including police officials have been killed and scores of people injured after protests broke out in different cities against Rizvi’s detention.

Interior Minister Rashid had announced the decision to ban the TLP on Punjab government’s recommendation under the anti-terrorism law.

A senior police official had quoted sources in the government as saying that authorities had started backdoor talks with the TLP to reach a ‘settlement’ but said it would have a ‘devastating and demoralising effect’ on the police force that had sustained injuries and even deaths just to ensure the writ of law.

Most of the highways, motorways and thoroughfares blocked for the past few days were cleared by law-enforcement agencies in a joint operation by Wednesday evening, while police high-ups said a final operation would be launched during the night to clear all remaining roads as well.

Talking to media in Sargodha on Wednesday, Prime Minister Imran Khan said it was the responsibility of the state to ensure protection of public against riots and also establish the writ of the state. Therefore, he added, the government had decided to ban the TLP in the larger interest of the public and state.