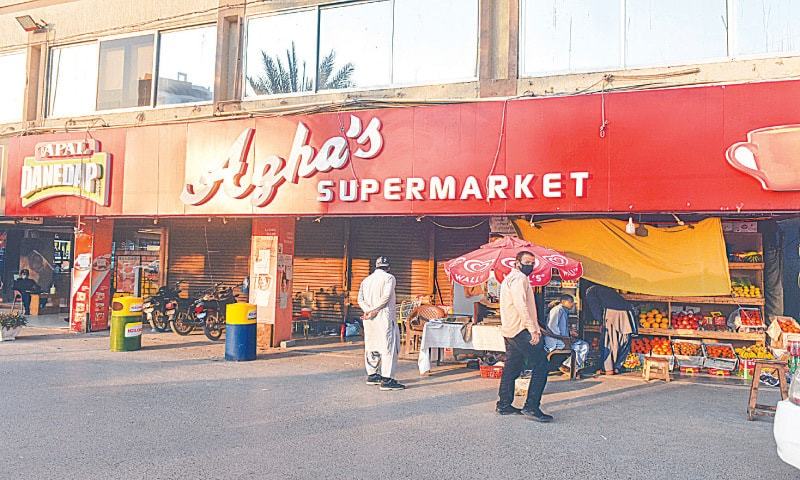 KARACHI: Even after Agha’s Supermarket in Clifton was gutted by a fire last year, regular customers kept the faith that it would bounce back and would often go there to see how things were coming along.

It was being said that Agha’s was expected to reopen in about two months. Meanwhile, they started home delivery for their customers, which was also much needed and appreciated in pandemic times. Later, as repair work was under way, they also brought out some shelves for people to be able to shop for groceries outside from the service road itself.

People could also take a seat in the sitting area arranged for them there while a representative of Agha’s approached them for their order that he carefully noted down before bringing to them whatever they wanted to buy from inside as still not ready Agha’s was using its shop space as a warehouse at the time.

Now, the latest about Agha’s Supermarket is breaking hearts. The front shutters remain closed at all times. There is a fruit vendor and people constantly approach him to ask about when the supermarket is going to reopen. He informs them that it has been closed down permanently, something that they are not readily willing to digest, especially the residents of Clifton and Defence Housing Authority (DHA). They have been shopping at Agha’s since 1978, when the place first opened.

“At the time, there was another popular supermarket in Clifton called ‘Cash n’ Carry’ that was right across Agha’s Supermarket, where you have the Delawalla Centre and toy shops now. But slowly their regular customers, too, started getting drawn to Agha’s. And then one day, they went out of business and Agha’s was all that there was here,” said an old customer of Agha’s, who was finding it hard to swallow the fact that now Agha’s, too, had decided to close.

“I was a little girl when we used to live in Clifton Estates, the apartment building near Agha’s. From our balcony, we could see the supermarket’s entrance. My mother would send me there with money to buy this or that, which she needed in her kitchen. And she would keep an eye on me from our balcony. Often I would get whatever she wanted while also buying some little treat for myself such as candy or chocolate from there,” says another regular customer.

“I was only nine or 10 at the time and my mother didn’t want me to cross the main road to get to Cash n’ Carry. Then we shifted to DHA. The vacant plot in front of our apartment balcony that allowed us a view of Agha’s had a building come up there. But we still came to Agha’s for all our shopping needs,” she remembers nostalgically.

“We used to get great service here. I particularly remember the two brothers at the counters. They were always so pleasant. Then one day my mother showed me a popular English weekly magazine in which the brothers had modelled for a popular clothing brand. We were so excited to spot them there,” the customer remembers.

“We learned that the brothers were Feroz and Farid Virani, the owner Noor Ali’s sons. The father and their uncle Anwar would also be there supervising in the background. Years went by. We grew up but still went to Agha’s for groceries, medicine, etc. Then Feroz and Farid took over the running of Agha’s. The supermarket was growing. They also started a meat shop, a chilled fruit and vegetable department, a cosmetics department,” she added.

Farid Virani had a sad smile on his face when told about the memories shared by their loyal customers. He nodded slowly.

“My older brother Feroz was one-and-a-half-year older than me. Both of us had just returned from the US after completing our studies when our father and uncle made us sit at the counters here to learn the ropes of running the business from the ground up. We have seen some four generations of customers coming here in the last 43 years,” he said.

“Now my uncle and brother are no more and between the fire and Covid-19, along with a family dispute, we have been unable to reopen. I tried repairing the shop after the fire but quite frankly I have run out of money now. Even the insurance amount that we got was not enough as there was also the stock that got burnt along with the shop, which is over three times the insurance money,” he explained.

Since the family dispute is a sub-judice matter, he refrained from shedding light on it.

There are rumours on social media that Agha’s has moved to another area but Virani said that it is not the case.

“Our old employees were the people I was worried about the most at first when I decided to close business here. I paid them all their dues and was also pleasantly surprised to find that they were able to easily relocate as being Agha’s former employees they were snapped up fast by the market,” he said.