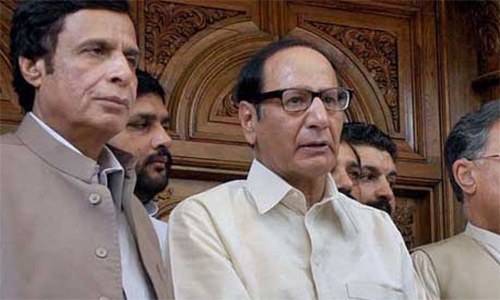 LAHORE: Differences between the ruling Pakistan Tehreek-i-Insaf (PTI) and its ally, Pakistan Muslim League-Quaid (PML-Q), surfaced on Sunday as the Chaudhrys did not attend the dinner hosted by Prime Minister Imran Khan at his Banigala residence on Sunday to protest against the ‘cold attitude’ of PTI leadership towards its ally.

However, the PML-Q has decided in principle to vote for the passage of the federal budget 2021-21.

The decision to vote for the passage of the federal budget was taken at a PML-Q meeting, jointly presided over by Chaudhry Shujaat Hussain and Pervaiz Elahi at their Zahoor Elahi Road residence, on Sunday.

The meeting discussed the ‘cold attitude’ of PM Khan towards the PML-Q.

Q-League keeps away from dinner hosted by prime minister

“The PML-Q leadership refused to attend the premier’s dinner as he did not bother to invite the party leadership directly. There is no point of meeting Mr Khan if he continues to distrust Chaudhrys and not take them onboard on important national issues,” a party insider told Dawn after the meeting.

He said the meeting also decided that the PML-Q would remain the ally of the government despite its concerns over the premier’s “not so good attitude” towards his ally. “Despite this major concern the meeting agreed to vote for the passage of the budge in the parliament,” he added.

The participants also discussed “hypocrites and sycophants” around the prime minister who they said were giving Mr Khan wrong advice besides creating differences among allies.

Earlier this year, the PML-Q had warned that it might review its alliance with the PTI if its “legitimate” demands were not met. The demands were related to the share in the administration in constituencies where its (PML-Q) lawmakers had won, and empowerment of its ministers and implementation of the agreement inked by both parties prior to 2018 elections.

“Under the agreement, the PML-Q was to be given two ministries each in the Centre and Punjab. The PTI has yet to implement this agreement and PM Khan does not seem to be bothered about it,” another PML-Q leader said, adding that the PML-Q had given the name of MNA Moonis Elahi for the federal ministry but Imran Khan declined and that led to a total trust deficit between the two allies.

The PML-Q has five seats in the National Assembly and 10 in the Punjab Assembly.