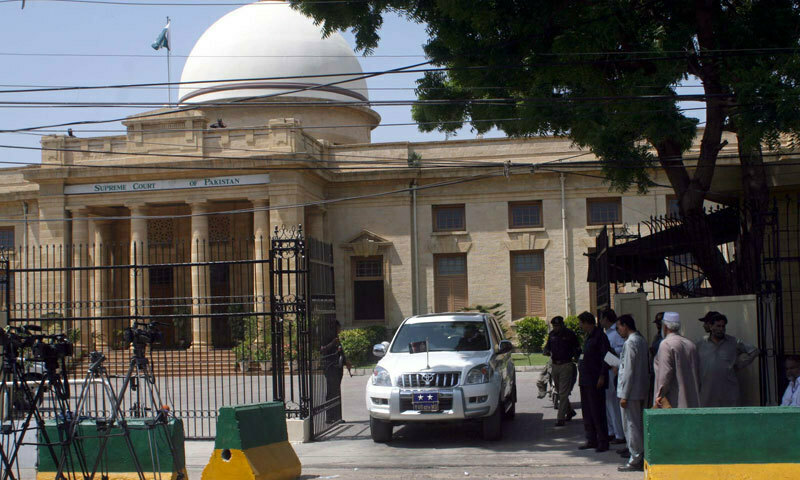 The Supreme Court on Thursday rejected a report furnished by a senior member of the Board of Revenue (BoR), claiming encroachment on 70 per cent of land across Sindh had been retrieved and directed him to end the occupation on all government land in the province with “visibility of action taken in a practical form”.

A three-judge bench headed by Chief Justice of Pakistan Gulzar Ahmed and comprising Justice Ijaz Ul Ahsan and Justice Qazi Mohammad Amin Ahmed, while hearing a case related to the digitisation of government land records in Sindh, directed BoR senior member Shamsuddin Soomro to submit a report in 30 days and ensure implementation of the court orders within the stipulated timeframe.

“In case of failure to implement the court orders, a contempt case will be initiated and you will go to jail,” the CJP told the government officer.

It will take us just five minutes to pass an order, the top judge remarked.

Don’t play games with us

While rejecting the report submitted by the BoR’s senior official, the chief justice expressed displeasure over the contents of the report, asking “Are you trying to fool us by submitting pictures of the corners of land?”

“Don’t play games with us,” the CJP reprimanded the officer and asked whether his department was oblivious to the fact that half of the government land in the province was occupied.

The officer responded that his department was taking steps to get lands vacated and digitise records.

Justice Ahsan remarked that the whole of Hyderabad was also encroached upon.

“What are these officers doing?” Justice Gulzar asked the attorney general, who was also present in the courtroom. “They are only protecting their own interests.”

The chief justice also asked the BoR official whether he was a part of the [land] mafia. “Are these 15 and 20-storey buildings [in Karachi] legal?” He added that all such buildings were constructed in connivance with the revenue department.

The officer responded that he would do his job in light of the court orders.

The chief justice asked the officer to visit the outskirts of Karachi and look at illegal construction taking place at a rapid pace. “Can’t you see what is happening on the lands behind and around Bahria Town?”

Later, speaking to media after the hearing, Soomro said the chief justice didn’t read the complete report submitted by the BoR.

“I am only answerable to the Almighty Allah and no one else,” the officer told journalists.

No timeframe for demolition of Nasla Tower: commissioner

Meanwhile, Karachi Commissioner Muhammad Iqbal Memon submitted a progress report on the demolition of Nasla Tower in Karachi a day after the top court ordered “immediate demolition” of the building located at Shahrah-e-Quaideen. The official also submitted a report about the demolition of Tejori Heights — an under-construction project in Gulshan-e-Iqbal’s Block 13-D.

The commissioner told the court that the implementation on the court orders had begun. “The work on ‘speedy’ demolition of Nasla Tower and razing of Tejori Heights is under way.”

A day earlier, the apex court had reprimanded the commissioner over his failure to carry out court orders to raze Nasla Tower and warned of being held in contempt.

The chief justice had ordered the commissioner to use all heavy equipment and machinery available at his disposal and “immediately demolish” Nasla Tower and Tejori Heights. He had also directed the senior bureaucrat to submit a report in the court later in the day.

Following the court’s admonition, pre-demolition preparatory work, which included removing of the panels and windows began. Heavy equipment and machinery were deployed at the site, according to the Karachi Commissioner.

Memon had explained that the high rise’s demolition had begun earlier but was paused due to a lack of safety measures.