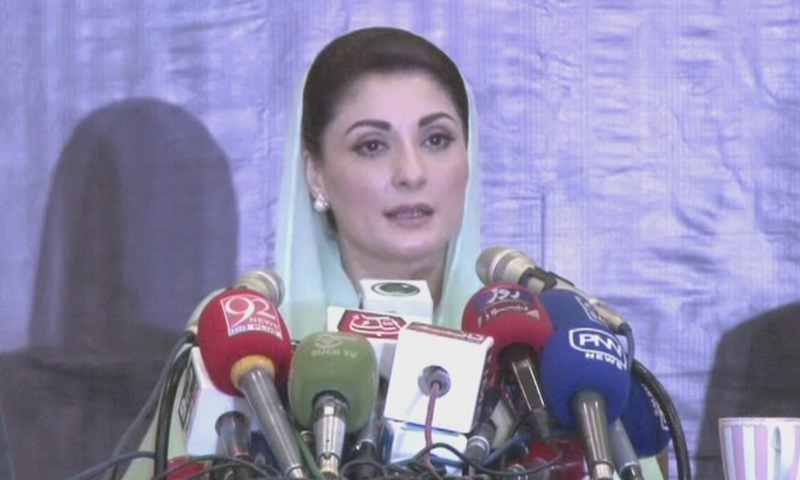 PML-N Vice President Maryam Nawaz on Saturday claimed that the Election Commission of Pakistan’s (ECP) statement regarding the NA-75 by-election was a “charge sheet” against the government.

“There was firing, polling was slowed, people were killed and bags of votes were stolen. The ECP was looking for you, where was the Punjab government,” she asked while addressing the media in Lahore.

“Where was the chief minister, the chief secretary, the police, the IG and the administration,” she questioned, adding that she was “happy that the ECP was carrying out its constitutional and legal duty”.

Earlier today, the ECP said that it suspected that the results of 20 polling stations had been falsified in the by-election for the NA-75 (Daska) constituency.

The commission said results of the NA-75 constituency were received with “unnecessary delay”, adding that it tried to contact the presiding officers several times but with no success. However, hours after the statement was issued, federal ministers claimed that the results showed that the PTI had won the election.

Addressing the ECP during today’s press conference, Maryam said that the “whole nation was watching” and urged the commission to reclaim its “lost respect and status” by taking action voting irregularities.

She called for cases to be registered against Punjab Chief Minister Usman Buzdar and Prime Minister Imran Khan for allegedly “trying to steal votes and martyring two individuals”, referring to the deaths of two citizens during a firing incident in Daska on polling day.

‘PTI rigged by-polls out of fear’

Maryam also claimed that the PTI rigged the Daska and Wazirabad by-polls because it knew that the PML-N would win by an “overwhelming majority”.

“Their camps were empty. When they went into the field they must have seen the turnout at their own camps […] which would have made them anxious with worry.” She maintained that the PTI resorted to firing in order to “create an environment of fear” in order to deter PML-N supporters from voting.

“There is a video that shows a PTI MNA standing beside those firing shots. Their candidate and their people opened fire in markets and streets which claimed the lives of two citizens.”

Maryam also lashed out at the government for blaming the opposition. “The administration and the police is theirs. Just imagine how someone from the PML-N would have been treated if they had acted the same.”

Despite the situation, PML-N voters and supporters refused to back down and stood against the use of force, she said. “I saw a video of a woman who said she had not planned to vote for the PML-N. But after the firing and hooliganism, she said she changed her mind.

“So you think the people are fools but they are not. Their eyes are wide open,” she said, adding that “everyone has a mobile phone”.

When they were unsuccessful in this regard, they resorted to slowing down the voting process in Daska and Wazirabad by closing down polling stations, she said. “They received internal orders […] there were long queues outside polling stations, videos of which were also shared.

“Have your ever heard of polling stations being closed for four to five hours? They closed the doors while their own ministers were sitting inside. What were they doing,” she questioned, adding that a minister from the ruling-PTI was also “caught red-handed”.

“When this scheme was also unsuccessful, they decided to run away with bags full of ballots,” she said, adding that this effort was thwarted by PML-N workers who were “vigilant after being beaten in the 2018 general election”.

“A presiding office was caught running away with a bag of ballots in Wazirabad by party leader Ataullah Tarar and our workers. He was attempting to flee in a police car but was caught in the presence of Rangers.” she said.

Maryam claimed that the ECP staff was also not spared in efforts to rig the by-elections. “There are 361 polling stations in Daska. We had the results of 337 which showed that we were winning. However, we waited and the results stopped at 337.

“When our people looked into it, we were told that approximately 22 returning officers had disappeared and could not be contacted.

She claimed that ECP officials were made to “vanish”. “No one knows where these officials went for 14 hours or where they were kept.

“Does someone’s phone stop working during foggy weather? That as a group [they] suddenly all vanish […] the election commission was helpless trying to find them and no one is listening to it.”

The government’s actions had alerted the people of Pakistan as to how the PTI rigged the 2018 general elections, according to Maryam, and how it would use every “lawful or unlawful measure including administration and police” to protect its interests.

“I once again congratulate Imran Khan for this historic failure,” she said, adding that the people had witnessed first-hand what rigging actually meant and who actually was the “Sicilian mafia”.

“All four provinces have rejected you, you came after being selected, now [,,,] the people have realised your [true] face.”

She asked the prime minister how could he explain the victory of the PML-N in the by-polls. “The PML-N and the nation have made you taste dust, you will not find a place to hide your face.”

If the government repeated yesterday’s “idiocy and mistakes” in the next general elections, then it would meet an “enlightening end”, Maryam said, adding the people had shown it a “full dress rehearsal” of what would happen.

She also said the PML-N had come to a consensus that in the event of repolling, it would have to be carried out in the entire constituency of NA-75 (Daska) instead of just the 20 polling stations.

“The issue is not just about these 20 polling stations […] they slowed down the process and created an atmosphere of fear in the whole constituency and harassed and scared voters. When you don’t give a conducive and peaceful environment to voters, then that election is null and void,” she said.