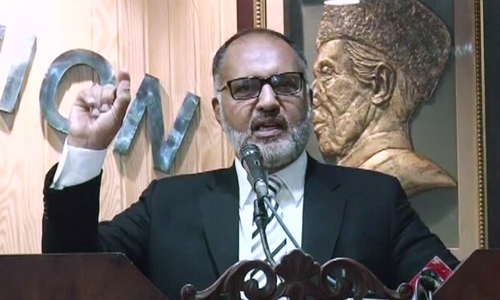 ISLAMABAD: Justice Shaukat Aziz Siddiqui, the former Islamabad High Court judge, challenged on Wednesday a June 9 decision of the Supreme Court registrar’s office to return his affidavit in which he said intelligence officers had asked him to manipulate the formation of benches.

The registrar’s office returned the affidavit with an observation that since the application contained scandalous material as well as inappropriate language, it could not be entertained under the Supreme Court rules of 1980.

In the fresh appeal, Justice Siddiqui pleaded with the Supreme Court to set aside the objections made by an assistant registrar and order that the affidavit be placed on record before a five-judge Supreme Court bench hearing his appeal against the opinion of the Supreme Judicial Council (SJC) as well as an Oct 11, 2018, notification under which he was removed as a superior court judge over his July 21, 2018, speech at the District Bar Association, Rawalpindi.

The affidavit, which spoke about his meetings with senior intelligence officers, was read out by Hamid Khan, who is representing Justice Siddiqui in the Supreme Court.

And this is the same affidavit on which the federal government had, on June 10, declared as misleading, as well as baseless, the reports about meetings between Shaukat Siddiqui and Lt Gen Faiz Hameed, the director general of the Inter Services Intelligence (ISI).

The fresh application filed by Justice Siddiqui pleaded that the affidavit, which was returned by the registrar, had a bearing on the facts and merits of the case and therefore was essential for hearings.

The application contended that the grounds cited by the registrar’s office for returning the application were “unsustainable” and that no scandalous material or language was used in the affidavit.

Enclosed with the application was an affidavit by Justice Siddiqui that contained the same material which was part of the additional reply made by the petitioner to the show cause notice issued to him by the SJC, the appeal said.

Nothing was added to the affidavit that was not already on record in his additional reply to the show cause notice. Hence no new material was being introduced through the affidavit, the application said, adding that the assistant registrar did not apply his mind to the contents of the affidavit.

“He did not compare the contents of the affidavit with the additional reply of the petitioner judge to the show cause notice.”