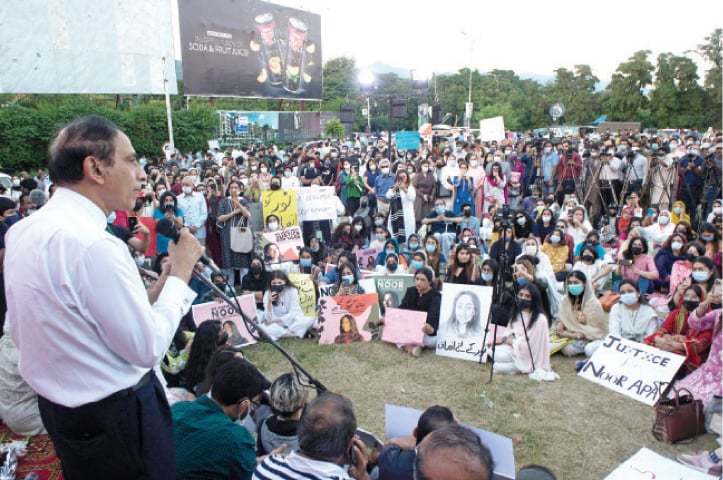 Former ambassador Shaukat Mukadam speaks to participants of a vigil held in memory of his daughter, Noor, outside the National Press Club in Islamabad on Wednesday. — Photo by Mohammad Asim

ISLAMABAD: As the sessions court commences the trial of the accused Zahir Jaffer, his parents and other co-accused in the gruesome murder of Noor Mukadam, legal experts have pointed out flaws in the incomplete challan, produced by police before the court to substantiate allegations against the suspects.

On the other hand, speakers during a vigil organised by Noor’s family, friends and civil society activists on the eve of her murder trial, pointed out that she was a kind and compassionate human being who deserved justice and her murderer along with those complicit in the crime must be given an exemplary punishment.

The police on Sept 8 submitted the incomplete challan of the murder since the key evidence – mobile phone of the alleged murderer Zahir Jaffer – is yet to be examined and its data has not been retrieved to place on judicial record.

According to Inspector Abdul Sattar, the officer investigating the case, the suspect’s mobile phone was damaged on the day of the incident and data could not be retrieved.

However, he said, an application had been filed before the court, seeking permission to get the mobile phone repaired as it might provide useful evidence to strengthen the prosecution’s case.

Interestingly, the police challan extensively cited Zahir’s phone, which he used frequently to speak to his parents and others.

According to the challan, the mobile phone was working even after Zahir beheaded Noor as it stated that Zakir Jaffer, father of the alleged killer, calmed his son down telling him that his men were on the way to rescue him and dispose of the body.

This also surprised former inspector general of police Saleemullah Khan. He said the investigating officer should have filed the application to get the mobile phone repaired in the beginning.

Mr Khan pointed out that the police did not invoke sections of the Anti-Terrorism Act and Hudood Ordinance which would make an out of court settlement difficult to achieve.

“Since the offences are compoundable, therefore, the accused persons may seek a compromise with the victim’s family and there is no law to stop this settlement,” he said, adding that the accused may face a trial under section 376 of the Pakistan Penal Code (PPC) for alleged rape.

It may be mentioned that recent statistics of the Islamabad Sessions Court disclosed that in more than 80pc cases, alleged rape offenders were acquitted by courts due to weak prosecution, faulty investigation or out of court settlements.

Senior lawyer Raja Inam Ameen Minhas said police has weakened its own case by implicating the injured therapy worker as an accused in this case.

“He could be a star witness as he witnessed the blood-soaked body of the deceased and came under attack by Zahir Jaffer and sustained serious injuries,” he said, adding that under the Law of Evidence, the testimony of an injured witness is of prime importance, hence, the injured accused should be made an approver.

He said the police challan also cited 18 witnesses and almost all of them were government officials, adding that the statement of government officials other than in cases related to narcotics substances were not considered independent and there was a possibility of them backtracking from the initial statement.

He pointed out that police should have used statements of the accused recorded by the magistrate instead of the investigating officer.

Since the police have submitted the evidence before the court, it is the responsibility of the prosecution now to prove allegations against the suspects, he added.

According to the investigation report of Islamabad police filed before the trial court, Noor Mukadam had lost six opportunities that could have saved her life.

“Her life could have been saved, had the accomplices acted otherwise,” the report stated. The report is also commonly known as ‘challan’ of section 173 of the Code of Criminal Procedure (CrPC).

A vigil was held in memory of Noor Mukadam outside the National Press Club on Wednesday.

The event started with recitation of the Quran by Eesa Nasir followed by a brief introduction by Osman Khalid Butt, an esteemed activist and friend of Noor and her family.

Noor’s sister, Sara Mukadam, rendered a heart-touching ode to her titled ‘My Beautiful Noor’, underlining that their relationship was more like friendship.

Christina Afridi, wife of former ambassador Tariq Khan Afridi, who had known Noor since she was born, mentioned that she was the most beautiful baby. Her fingers, even as a newborn, indicated her artistic inclination and capabilities, she added.

Human rights defender Tahira Abdullah said we shall continue to repose our faith, hope, trust and confidence in our criminal justice system and ask all of Noor’s well-wishers to do the same, with patience and fortitude.

Ambassador Shaukat Ali Mukadam, Noor’s father, thanked everyone who had gathered to express their solidarity with Noor and his family. He thanked Prime Minister Imran Khan for conveying his deep concern during various interviews with the media.

Mr Mukadam expressed his confidence in the legal system and made a passionate appeal to the chief justices of the Supreme Court and high court as well as the additional sessions judge, to ensure that justice is granted. “The murderer ought to be given exemplary punishment and his accomplices should be punished in accordance with the role that they played,” he said.

No other daughter of Pakistan should ever go through what Noor went through, he said, adding that this was a test case that would determine the nation’s faith in the justice system as the entire nation was looking for justice to prevail.

In the end, Madeeha Fawad, Noor’s cousin, offered a poignant prayer for Noor. The event ended with a candlelight vigil where all those in attendance observed a moment of silence for Noor and for justice.