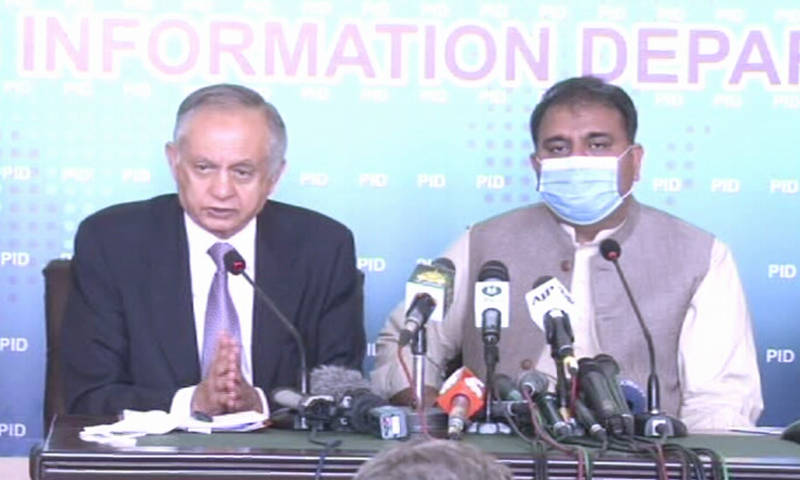 Federal Minister for Information and Broadcasting Fawad Chaudhry on Friday questioned why action shouldn’t be taken against foreign service officials for instances of blocking labour access to embassies.

Addressing a press conference in Islamabad with Adviser to the Prime Minister on Commerce and Investment Abdul Razak Dawood, Chaudhry said: “There are incidents where embassy officials placed rocks and blocked routes to (Pakistani) embassies so labour could not enter them. Should proceedings not be initiated against them?”

He said details of events which had caused Prime Minister Imran Khan to address the country’s ambassadors and point out their mistakes should be looked at. He added that in one instance, an embassy which was currently under investigation had mishandled the case of a woman being continuously raped while working in a house.

Giving brief details, he said she had approached the embassy to seek help and the officer present had told her off by saying, “You’ve already had three divorces before. Why don’t I hand you over to the police?” This response led to her going back to the house where “injustice was being committed against her”, the minister said.

“If Pakistan’s prime minister doesn’t talk on this behaviour then who will talk. If the government and the prime minister can’t stand with labour and the poor then what right do we have to remain in government?”

The minister’s comments come a couple of days after Prime Minister Imran Khan, while speaking to envoys posted in 19 countries through video conferencing, said he had noticed “shocking callousness” of Pakistani diplomats posted overseas after a few recent incidents involving expatriates.

He was in particular critical of the missions in Saudi Arabia and United Arab Emirates, which host the largest Pakistani communities overseas, but the way the comments were delivered made it look like a censure of the entire foreign service.

“Indifferent attitude is unforgivable, unacceptable,” the premier had said, telling the officers to give up their ‘colonial mindset’ and extend special treatment to the expatriate communities.

His comments came after the government suspended the outgoing envoy to Saudi Arabia Raja Ejaz and recalled six other diplomats from Riyadh for not properly serving the community and inefficiency.

The prime minister’s comments led to angst, and demoralisation among the officers of the foreign service. To quote the words of one officer, the anger over the “caustic remarks” is very intense and the comments “have made even the reticent ones to speak up”.

During today’s press conference, Chaudhry said that this was the “first time” that a prime minister had stood with the weak instead of the powerful and called upon ambassadors to not only maintain a close relation with overseas Pakistanis but also address their complaints.

Chaudhry said the opposition needed to reflect on its behaviour and that indulging in political point-scoring over all issues was not appropriate. “If we have to take this country forward then we will have to uplift the country’s poor segment of society.”

He added overseas Pakistanis should be appreciated for sending remittances and called out certain sections of the media for what he claimed was their “anti-labour position”.

Chaudhry said that the prime minister had said more than once that he was proud of diplomats working for Pakistan, pointing to how embassies had worked during the Covid-19 pandemic to repatriate Pakistanis abroad.

“That is also a part of history and the prime minister has appreciated it.”