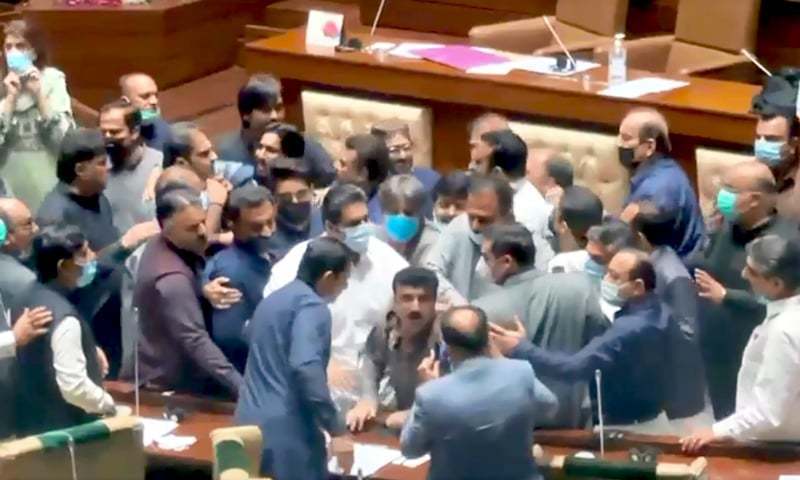 The Sindh Assembly on Tuesday witnessed a noisy clash after lawmakers belonging to the Pakistan Tehreek-i-Insaf (PTI) came to blows with three dissident MPAs of the party.

The three MPAs — Karim Bux Gabol, Shaharyar Khan Shar and Muhammad Aslam Abro — had earlier announced they would not vote for the PTI candidates in the March 3 Senate elections because they were not taken on board while awarding the tickets for the polls.

The three lawmakers were welcomed by members of the ruling PPP when they arrived at the assembly for Tuesday’s session.

However, as they entered the house, some PTI lawmakers charged at the ‘rebel’ MPAs. A scuffle then broke out, with lawmakers shoving each other and shouting slogans as the security staff and the speaker appeared helpless in maintaining order. PPP members were reportedly also part of the struggle.

As the centre of the melee was Gabol, who while surrounded by other PTI lawmakers could be heard calling out the PPP for alleged “oppression”. In a video message on Monday, Gabol had stated he would not vote for the PTI candidates during the Senate elections because they had allegedly bought their tickets, and added that the PTI government had “failed to deliver” in its 2.5 years.

Following the scuffle, Gabol was escorted out of the assembly by PTI lawmakers, made to sit in a car and driven away. Meanwhile, the other two dissident MPAs — Shar and Abro — remained on the PPP’s side and exited the assembly with government members.

The deputy speaker adjourned the session until Wednesday, when polling for the Senate elections will take place.

Speaking to media after the episode, Abro alleged that Gabol had been “kidnapped” by PTI lawmakers.

He said he and other dissidents would remain part of the PTI and will vote “according to our conscience” during the Senate polls, while reiterating that he would not vote for the PTI candidates.

Leader of the Opposition in the Sindh Assembly Haleem Adil Sheikh, while addressing the media outside the provincial assembly building on Tuesday, accused journalists of “acting like PPP workers”.

Sheikh’s remarks came in response to a question from a journalist, who asked about video footage showing PTI lawmakers manhandling members of their own party.

The accusation irked the journalists who protested the remarks, leading to a shouting contest between PTI lawmakers and journalists.

The Karachi Union of Journalists later issued a statement condemning Sheikh’s remarks and warning of boycotting coverage of PTI lawmakers unless an unconditional apology was issued.

In a statement, Sheikh later issued an “apology” for the quarrel with reporters, saying his emotions were “high” because a PTI member had been tortured in the assembly.

He alleged that ministers belonging to the PPP “forcefully brought our kidnapped MPAs to the assembly as hostages”, adding that one of the MPAs (Gabol) was freed by PTI lawmakers from the PPP’s control after he made noise.