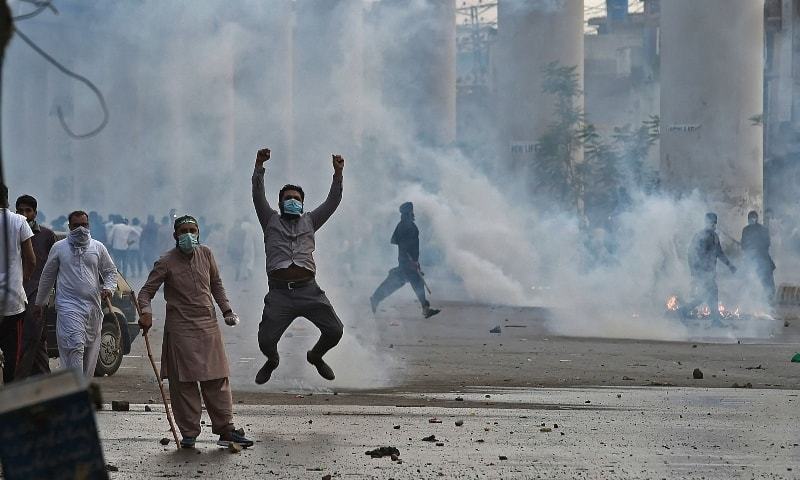 The French embassy in Pakistan on Thursday advised all French nationals and companies to temporarily leave the country, after violent anti-France protests paralysed large parts of the country this week.

“Due to the serious threats to French interests in Pakistan, French nationals and French companies are advised to temporarily leave the country,” the embassy said in an email to French citizens.

“The departures will be carried out by existing commercial airlines.”

Speaking to Dawn.com, the embassy’s press attache Veronique Wagner, said “we can confirm that we have sent a precautionary note to all our citizens in Pakistan advising them to temporarily leave the country if possible due to the recent protests that have caused graver security threats and put its citizens at risk.”

She added, however, that the embassy has not been closed but was working with limited staff.

Anti-French sentiment has been simmering for months in Pakistan since the government of President Emmanuel Macron expressed support for a magazine’s right to republish blasphemous caricatures depicting Holy Prophet (peace be upon him).

On Wednesday, the Pakistani government moved to ban the Tehreek-i-Labbaik Pakistan (TLP) whose leader had called for the expulsion of the French ambassador.

Saad Rizvi was detained hours after making his demands, bringing thousands of his supporters to the streets in cities across Pakistan.

Read: Why could PTI not manage TLP challenge?

TLP supporters brought Islamabad to a standstill in November last year for three days with a series of anti-France rallies.

Govt moves to ban TLP after reign of terror

Interior Minister Sheikh Rashid on Wednesday had announced the decision to ban the TLP on Punjab government’s recommendation under anti-terrorism law but added that the summary would be sent to the federal cabinet for its approval.

A senior police official had quoted sources in the government as saying that authorities had started backdoor talks with the TLP to reach ‘settlement’ but said it would have a ‘devastating and demoralising effect’ on the police force that had sustained injuries and even deaths just to ensure the writ of law.

Most of the highways, motorways and thoroughfares blocked for the past few days were cleared by law-enforcement agencies in a joint operation by Wednesday evening, while police high-ups said a final operation would be launched during the night to clear all remaining roads as well.

Talking to media in Sargodha, Prime Minister Imran Khan said it was the responsibility of the state to ensure protection of public against riots and also establish writ of the state. Therefore, he added, the government had decided to ban the TLP in the larger interest of the public and state.

Why is the TLP protesting?

During the past three days, half a dozen people including police officials have been killed and scores of people injured after protests broke out in different cities against the detention of TLP chief Saad Hussain Rizvi.

In November last year, the party had staged a sit-in in Rawalpindi demanding expulsion of the French ambassador over the publication of blasphemous caricatures. However, the group ended its protest after reaching an ‘agreement’ with the government, claiming that all its four demands had been accepted.

The government had reached an agreement with the TLP on Nov 16 to involve the parliament to decide the matter in three months. As the Feb 16 deadline neared, the government had expressed its inability to implement the agreement and sought more time. The TLP had agreed to delay its protest by two-and-a-half months to April 20.

On Sunday, the party chief, in a video message, had asked the TLP workers to be ready to launch the long march if government failed to meet the deadline. It had prompted the government to arrest him.

Police had swooped on Rizvi at around 2pm on Wahdat Road in Lahore on Monday where he had gone to attend a funeral. Outraged, the TLP had issued a call for countrywide protests.