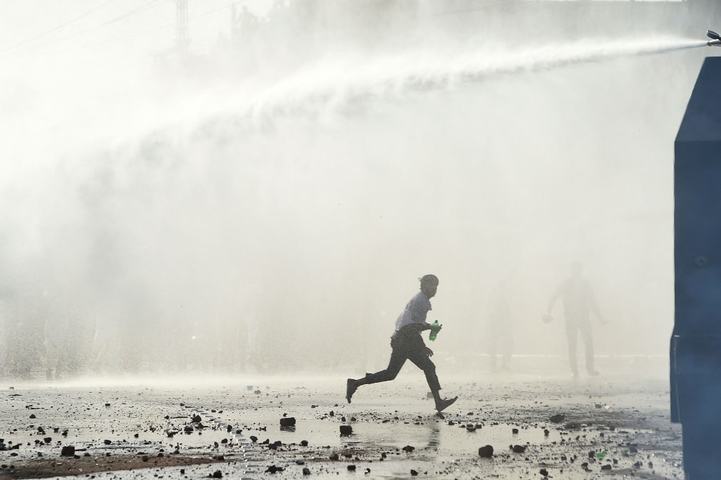 Interior Minister Sheikh Rashid Ahmed on Wednesday announced that the government had decided to ban the Tehreek-i-Labbaik Pakistan (TLP), whose supporters and workers have been carrying out violent protests across the country for three days after the arrest of their chief.

In a tweet, he said the religiopolitical outfit would be banned under Rule 11(b) of the Anti-Terrorism Act (ATA), 1997.

Rashid said the Punjab government had recommended a ban on the organisation, for which a summary was being sent to the federal cabinet.

Addressing a news conference in Islamabad earlier, Rashid said TLP leaders used to come to all rounds of talks with the government after issuing instructions to their workers regarding road closures.

“They were more prepared than us but today we’ve decided that [a] ban on TLP [will be placed] and this file is going to the cabinet for the approval from today,” the minister said.

His statement comes hours after law enforcement agencies and officials moved to clear TLP activists from roads in different cities of the country as protests entered a third day.

Rashid in his remarks said the TLP workers through blocking roads had stopped ambulances from reaching their destinations and impeded the transport of oxygen cylinders for Covid-19 patients.

He noted that GT Road and motorways had now been cleared for traffic. He said two policemen were killed and at least 340 injured in the violence “and the law is following those who blocked roads through social media and gave the message of unrest”.

According to the minister, the police personnel held hostage by TLP workers to gain leverage for their demands have now returned to their police stations.

He said the government was still committed to present a bill regarding Namoos-i-Risalat in the National Assembly and had held several meetings in this regard with TLP leaders.

“It was our effort till the last moment to convince them to agree on a resolution to be presented in the assembly, but all of our efforts were unsuccessful,” he said, adding that a major reason for their failure was that TLP activists “wanted to come to Faizabad chowk and Islamabad at any cost”.

The minister said the TLP had done “extensive preparations” for their protest, which were effectively countered by police.

He called upon TLP members “who are running the media” to surrender, saying they were mistaken in their belief that they could create problems for the government through social media.

“We want a document that exalts the flag of the Prophet (PBUH), but what you are demanding gives an impression of us being an extremist-minded state to the world,” he told the TLP leadership.

Answering a question, Rashid said the government had kept Faizabad closed “as a precaution” and the interchange would be reopened by the evening.

Asked why the situation hadn’t changed despite the current administration coming into power, Rashid said in the recent violence police stations were attacked and policemen were abducted and brought down from their motorcycles and beaten up.

“When we did politics and opposition, we would allow ourselves to be arrested whenever a warrant was issued; we did not use to torture police through our workers and people didn’t use to die in ambulances [because of us],” he added.

The minister stressed that the TLP was being banned “not on the basis of the political situation but because of their character”.

Earlier in the day, Rashid said that the government would deal with an iron fist with those who take the law into their own hands, Radio Pakistan reported.

Chairing a meeting in Islamabad to review the law and order situation, he directed law enforcement agencies to ensure the writ of the state at all costs.

He said that Pakistan Rangers had done an excellent job in collaborating with the police and the administration to clear the roads of protesters.

Why is TLP protesting?

The TLP is protesting against the arrest of their leader Saad Hussain Rizvi, who was taken into custody earlier this week, and blasphemous caricatures published in France. They have demanded that the French ambassador be sent home and import of goods from that country banned.

The government had reached an agreement with the TLP on Nov 16 to involve the parliament to decide the matter in three months. As the Feb 16 deadline neared, the government had expressed its inability to implement the agreement and sought more time. The TLP had agreed to delay its protest by two-and-a-half months to April 20.

On Sunday, the party chief, in a video message, had asked the TLP workers to be ready to launch the long march if government failed to meet the deadline. It had prompted the government to arrest him.

Police had swooped on Rizvi at around 2pm on Wahdat Road in Lahore on Monday where he had gone to attend a funeral. Outraged, the TLP had issued a call for countrywide protests.

Taking to Twitter, Islamabad Deputy Commissioner Hamza Shafqaat said that all roads in the capital, including exit and entry points, were clear for traffic.

A heavy police contingent was also deployed in Bhara Kahu and Faizabad while all roads leading to the French embassy were blocked.

A group of angry TLP protesters who were apparently following a police official stormed the emergency of Lahore General Hospital.

Carrying sticks and canes, they attempted to break the emergency’s doors, according to hospital sources.

In a statement, Punjab Chief Minister Usman Buzdar expressed satisfaction over the restoration of law and order in the province.

“Most of the roads in the province have been reopened. The police, administration and law enforcement agencies are performing their duties,” he said, paying tribute to their services.

He stated that the government was pursuing a zero-tolerance policy against those violating the law. “We will not allow anyone to damage public or private property. Violence and rioting will not be tolerated,” he said, adding that strict action will be taken against those breaking the law and disturbing law and order.

A senior Lahore police official, speaking to Dawn on the condition on anonymity, said that 100 TLP workers had been arrested so far.

In Jhelum, police cleared GT Dina Road after conducting a joint operation and arrested TLP workers. The road was opened for traffic on both sides, a police spokesperson said, adding that officials also arrested those who took the law into their own hands.

In Kharian, police registered two separate cases against TLP workers for blocking roads and interfering in the state’s affairs. More than 50 people have been named in the FIR while 25 unidentified culprits have also been identified.

In Nankana Sahib, traffic was restored on the Lahore-Jaranwala Road.

In Chunian, a clash between police officials and TLP workers left a DSP and a SHO injured. Several injured TLP workers were also shifted to the hospital. Reportedly, TLP supporters have blocked Multan Road and Malanwala Bypass resulting in cars being stuck for miles.

Karachi Traffic Police said that Hub River Road and the Northern Bypass had been opened for traffic, adding that the protest had finished.

A day earlier, four people were killed, hundreds of protesters and policemen were injured and thousands of TLP activists and supporters were arrested and booked for attacking law enforcement personnel and blocking main roads and highways.

The federal cabinet on Tuesday had decided to deploy Pakistan Rangers in all major cities of the country during the holy month of Ramazan to maintain law and order and resolved that the present government would not succumb to any pressure of the TLP.

“Every group has a right of protest and we are ready to hold talks with TLP,” said Minister for Science and Technology Fawad Chaudhry at a post-cabinet meeting press conference.