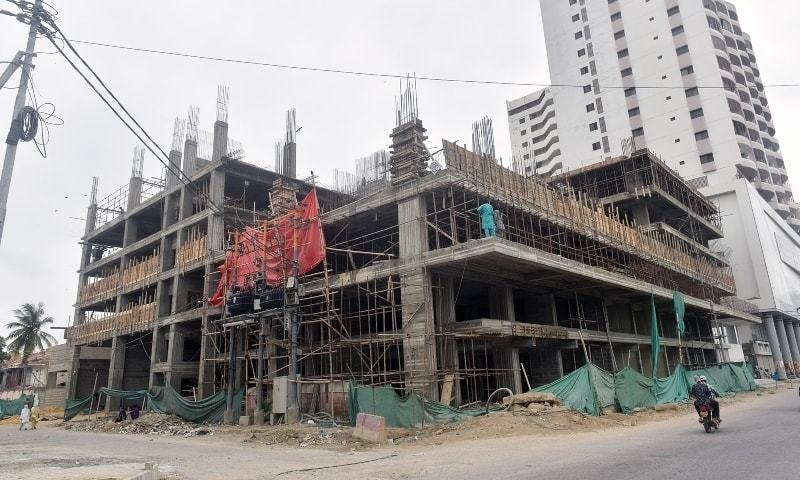 KARACHI: A 19-storey residential-cum-commercial building in Clifton Cantonment is being constructed in brazen violation of Supreme Court orders. On Jan 22, 2019, a two-judge bench led by Justice Gulzar Ahmed had banned the conversion of residential and amenity plots for commercial purposes “all across Karachi City including cantonment areas”.

The interim order came during the hearing of a civil petition (No. 815-K/2016) about unauthorised construction on evacuee property in Lyari. No subsequent order was passed to modify or set it aside.

The above-mentioned building, named Zamzam Arcade, is being constructed on a residential plot measuring 3,600 square yards where Bath View apartments once used to stand. This plot — G24, Block 9, Clifton — was among a list of around 915 residential/amenity plots converted to commercial use that was compiled by the Sindh Building Control Authority (SBCA) in response to the SC directives. As per the list, the plot had been converted from residential to commercial on Aug 20, 2018, only a few months before the apex court’s order.

The order read: “SBCA nor any other authority shall approve any conversion including pending ones. All conversion allowed by these authorities shall be reviewed and all efforts shall be made to ensure that the land which was originally provided in the Master Plan of the city of Karachi is restored to that status.”

It should be noted that unchecked commercialisation of Karachi’s real estate — which allegedly earns windfalls for certain politicians and bureaucrats — is placing increasing pressure on its already decrepit civic infrastructure and leading to a breakdown in service delivery.

On Jan 24, two days after the court issued the directives, the SBCA notified an immediate ban on conversion and approvals of building plans/NOCs on converted plots within Karachi division until further orders. The notification also said: “All pending cases of change of land use (conversion) and approval of construction permits/ building plans/ NOCs on converted plots shall be deemed to be rejected as unconsidered.” Signed by DG SBCA Iftikhar Ali Kaimkhani, copies of the notification were sent to, among others, the director military lands and cantonments, district commissioners and SBCA directors “for immediate and strict compliance in letter and spirit”.

The SBCA also issued a public notice cancelling “all approvals, NOCs for change of land use/construction permits/ completion plans/ occupancy certificates/ NOC for sale and advertisement [etc]….” in those cases where amenity or residential plots were being put to commercial use. It further said: “The SBCA is determined to take action of demolition/ sealing/ ejectment wherever required in consonance with the orders of the Honourable SC.”

However, what took place in the following months appears to be in complete violation of the apex court’s order. On June 13, 2019, the Karachi Development Authority, the lessor of the plot in question, received outstanding dues of Rs9.7 million from the property owners, including demolition fee, plan forwarding fee, etc. The next day, KDA’s Directorate of Land Management issued an NOC to the Cantonment Board Clifton (CBC), listing the names of the four co-owners and specifically stating that the plot was “Residential/ thereafter commercialised by Master Plan Dept SBCA”.

As per a written response to Dawn’s questions from the assistant director, commercial cell, KDA: “The said commercial plot does not come under the purview of the ban list of MPD, SBCA, hence the Land Department issued letter to CBC as per procedure.” If that was indeed the case, then why did Senior Court Associate Syed Zafar Ali on the SC’s direction send a certified copy of the order, dated Jan 22, 2019, to 11 recipients, among them the DG KDA?

The firm behind the construction of Zamzam Arcade, CL Builders and Developers, did not respond to questions from Dawn.

Meanwhile, various other authorities issued NOCs in respect of the planned high-rise. In March 2019, the Civil Aviation Authority gave height clearance of 400 feet for flight safety purposes. On May 3, K-Electric issued an NOC for provision of electricity connection in response to a request by the executive officer, CBC. On May 27, Sui Southern Gas issued an NOC in response to a request by one of the owners of the property. On July 23, the KWSB issued an NOC to provide water and sewerage services for the project at a request of the chief engineer, CBC.

Military Lands & Cantt Karachi Region Director Adil Rafi Siddiqui told Dawn that the notification issued by the SBCA following the apex court order of Jan 22, 2019 “has never been received in this office”. However, a source in the SBCA has shared with Dawn a TCS receipt (consignment number 306026311135) to refute this claim. The receipt shows that the SBCA did dispatch a document to the director, MLC, on Jan 29, 2019 at 12.57pm.

In his response to Dawn’s questions, Mr Rafi further said that while the plot in question fell within the jurisdiction of the CBC, “NOC from land point of view declaring the plot has been issued by KDA, being the lessor as well as record owing [sic] agency. Honorable apex court vide order dated 22-01-2019 had directed SBCA to review all plots which were originally meant for residential/amenity purpose and had been converted for commercial use and to file a report thereof in the court. This office has not so far been informed by SBCA regarding any property falling inside a cantonment in Karachi that would be under review with SBCA/ KDA….”

A retired senior official from SBCA described the cantonment board’s response as “foolish, baseless and worthless”. He questioned how CBC could continue with the project given that the order expressly imposed a “complete ban in Karachi including cantt areas. The director MLC is bound to obey the SC’s order, not the SBCA.” The apex court, he said, sought CBC officials’ attendance at the hearings, and “the attorney general Pakistan, advocate general Sindh and chief secretary Sindh contacted them and they attended meetings on the issue”.

Moreover, another certified copy of the order, this one dated Jan 24, 2019 was dispatched by Senior Court Associate Syed Zafar Ali, to 23 recipients, including the chairmen/CEOs of Karachi, Clifton, Faisal, Malir and Korangi cantonment boards and the DG KDA “for immediate compliance and report as directed by the court”. Over two years later, the construction on Zamzam Arcade continues as before.

Residents of the area are already suffering the consequences of the ongoing project. Several years ago, CBC had set up a kachra kundi (neighbourbood garbage collection point) adjacent to the plot. However, it was obstructing the planned entrance to Zamzam Arcade’s residential apartments from the side street and was removed during the course of the construction. “The kachra kundi used to serve the surrounding residential area as well as commercial/residential towers of Forum Mall, Ashiana Mall and Vincy Mall,” says one homeowner. “Now the kachra is being thrown in nullahs and here and there in the streets.”