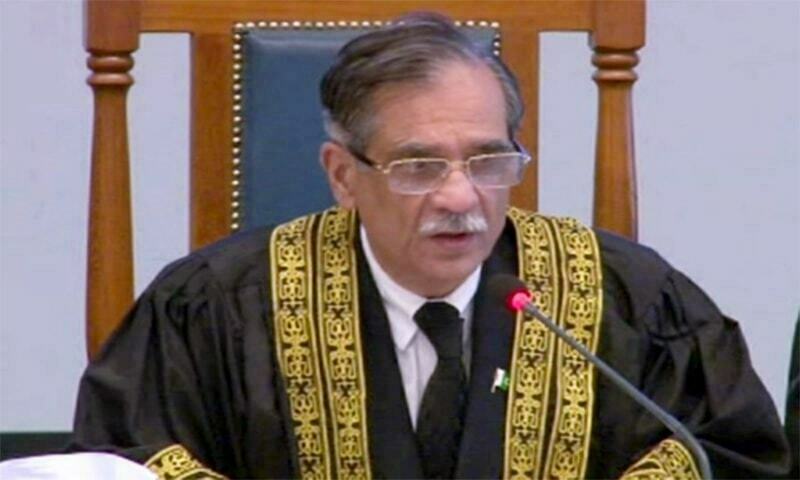 The Islamabad High Court on Friday threw out as inadmissible a petition seeking contempt proceedings against PML-N leaders — Maryam Nawaz and Shahid Khaqan Abbasi — for “scandalising” former chief justice of Pakistan, Saqib Nisar, and subjecting him to “character assassination”.

Abbasi had on November 15 demanded that a suo motu notice be taken against Nisar after former chief judge of Gilgit-Baltistan, Rana Shamim, accused him of being involved in denying bail to PML-N supremo Nawaz Sharif and Maryam ahead of the 2018 general elections.

“If Mian Nawaz Sharif can go to jail, why can’t Mian Saqib Nisar?” Abbasi had said in a statement after the allegation by Shamim made the news.

Read more: ‘If Nawaz can go to jail, why can’t Saqib Nisar?’: Abbasi seeks suo motu on denial of bail to Maryam, Nawaz

Abbasi’s comments had come after an investigative report, published in The News by journalist Ansar Abbasi, quoted the former top judge of GB as saying in an alleged affidavit that he had witnessed Nisar relaying instructions to a high court judge to not release Nawaz and Maryam in the corruption references against them.

Throwing out the petition, filed by Advocate Kulsoom Khaliq, IHC Chief Justice Athar Minallah said in his written order that a judge who ceased to hold a judicial office “attains the status of a private citizen”.

“Such a person is no more a member of the ‘Court’ in the context of Article 204 of the
Constitution nor under the Ordinance of 2003,” Justice Minallah wrote.

He further said that as a private citizen, “it remains open to a retired judicial officer to seek remedies available in a court of law. However, the offence of contempt is not attracted in the case of a retired judge because after retirement the latter attains the status of a private citizen.”

The court said judges were entrusted with an “onerous duty to serve the people through the fountain of justice and they are not immune from public scrutiny nor criticism”.

“An independent judge would not be influenced nor affected in any other manner because of public
criticism,” he continued.

The IHC chief justice explained that the exercise of the power of contempt would be justified only if it was in the public interest.

“In the case in hand, the petitioner seems to be hurt because a former Chief Justice of Pakistan has been publicly criticised in his individual capacity. This definitely does not attract the offence of contempt,” the order read.

Earlier during the hearing, Justice Minallah observed that remarks about retired officials did not warrant contempt of court charges, even if they were made against a former chief justice.

He insisted that judges were open-minded about criticism, saying, “Judges hold a very high position and they should welcome criticism.”

The petitioner, Khaliq, also drew the attention of the chief justice towards another case against Ansar Abbasi and others over the investigative report pending with the IHC.

However, Justice Minallah said it was a separate case and should not be mixed with the current one.

The IHC had on Nov 16 taken notice of the investigative report and issued summons to Ansar Abbasi, former chief judge of GB and two others. The hearing of the case will be held on Nov 30.