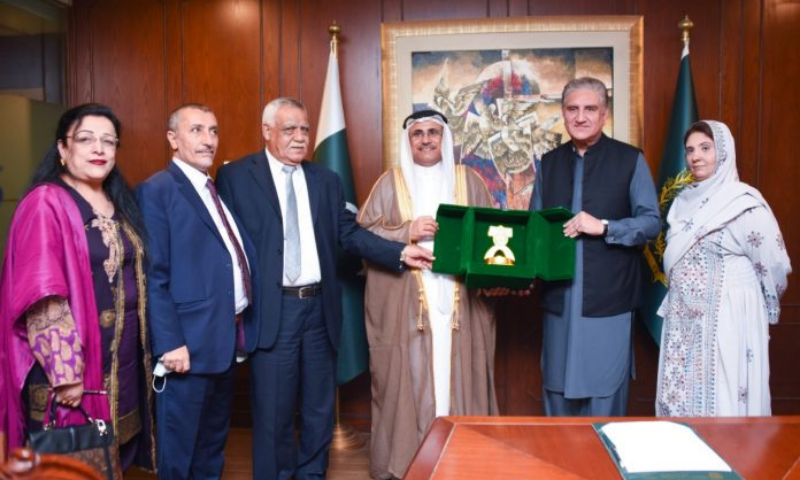 President of the Arab Parliament Adel Abdul Rahman Al-Asoomi appreciated the role Pakistan has played in Muslim causes in a meeting with Foreign Minister Shah Mahmood Qureshi on Monday.

It was the first visit to the country by a delegation of the Arab Parliament, the Foreign Office said in a statement issued after the meeting.

During the meeting, the two sides exchanged views on key issues related to the Muslim ummah, the statement said.

Qureshi emphasised that the “shared bonds of faith, culture and common aspirations generated natural affinity between the peoples of Pakistan and the Arab world”.

He informed the delegation about the “serious human rights situation” in Indian-occupied Kashmir, stressing the importance of resolving the Kashmir issue in line with United Nations Security Council resolutions as well as the wishes of the region’s people.

He also reiterated Pakistan’s stance on the Palestine issue, and highlighted the need for a solution in accordance with UNSC and Organisation of Islamic Cooperation (OIC) resolutions. He also “stressed the importance of peace and stability in the Middle East for Pakistan”.

Pakistan, he said, wanted peace in the Middle East and as a founding member of the OIC, it was committed to playing a positive role to unite the international community.

Read: Qureshi calls on Muslim nations to unite over Israeli action against Palestinians

Meanwhile, the Arab Parliament president underscored the need to establish more parliamentary linkages for a better understanding of these issues, according to the statement.

Qureshi expressed confidence that the visit of the Arab parliamentary delegation would prove to be an important milestone in the development of bilateral parliamentary relations, according to an APP report.

“The two sides underscored the need for a collective approach by the Muslim ummah to help resolve political, social and other issues confronting the Muslim world,” the FO statement added.

The delegation arrived in Islamabad for a five-day visit on Sunday.

The Arab Parliament is an 88-member advisory committee made up of lawmakers from each of the Arab League’s 22 member nations.