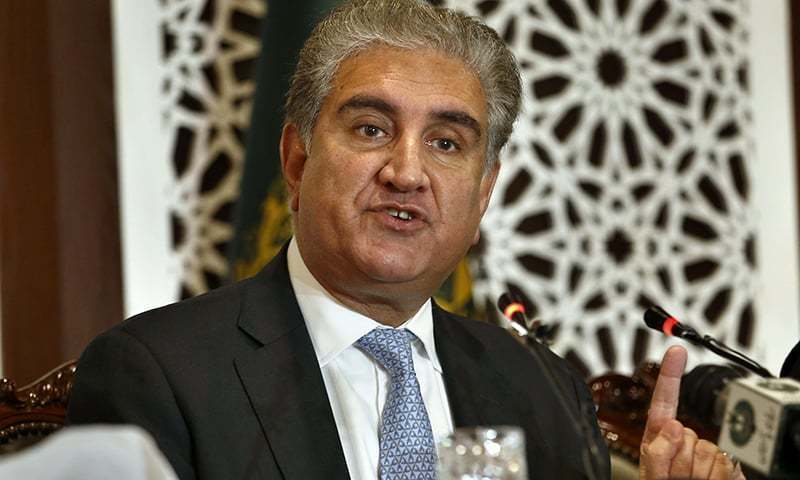 The foreign minister’s comments come a day after Indian National Security Adviser Ajit Doval walked out in protest during a speech by Special Assistant to the Prime Minister on National Security Moeed Yusuf at an online meeting of the Shanghai Cooperation Organisation (SCO) after the former’s objections to Pakistan’s political map, which was on display in the background during Yusuf’s address, were overruled by the forum.

Yusuf’s office said in a statement that India’s “spurious claims were rejected as it faced defeat after its formal objection to Pakistan’s new political map was overruled”. The map remained on display in the background during Yusuf’s address.

In a statement released today, Foreign Minister Qureshi said India’s objection to Pakistan’s political map at the meeting was rejected which caused embarrassment for Delhi.

“Russia, the host of the meeting, did not accept India’s perspective,” he said, adding that India had violated the organisation’s rules by raising the issue at the platform.

“Indian illegally occupied Jammu and Kashmir is an internationally recognised disputed territory and there are UN resolutions about the issue,” he said.

Qureshi added that China had repeatedly offered to resolve issues with India at the de-facto border at Ladakh through dialogue. “[But] India adopted an aggressive posture and then faced humiliation,” he said, adding that China responded to Indian aggression.

“The Pakistani national security adviser deliberately projected a fictitious map that Pakistan has recently been propagating. This was in blatant disregard to the advisory by the host against it and in violation of the norms of the meeting,” said Anurag Srivastava, spokesperson for the ministry.

“After consultation with the host, the Indian side left the meeting in protest at that juncture. As was to be expected, Pakistan then went on to present a misleading view of this meeting,” Srivastava added.

In response to this statement, Pakistan’s Foreign Office said “the map reaffirms Pakistan’s commitment to the UN Security Council Resolutions and the supremacy of the UN Charter.”

Chaudhri said Pakistan is committed to SCO as a platform for regional cooperation.

“We are actively playing a positive and constructive role and following the SCO charter to not let our bilateral relations with any country impact our engagement with SCO.”

Pakistan had on Aug 4 — a day before the first anniversary of annexation of occupied Kashmir by India — unveiled the new political map underlining the disputed status of the Kashmir region.

The row over the display of the new map at the SCO meeting started a few days ago during a test call for the conference, after India noticed it in the background.

Later, India protested to Russia, which was hosting the meeting. Moscow conveyed New Delhi’s reservations to Islamabad, but the Foreign Office, according to SAPM Yusuf, rejected the Indian position and refused to remove the map.

Pakistan’s position was that contrary to the Indian claim, the map does not claim any part of the Indian territory and was in accordance with the UN Security Council (UNSC) resolutions and the “sentiments” of the Kashmiris.

The National Security Division (NSD), in a media statement, said: “Pakistan highlighted that India under international law had no legal rights to claim the internationally recognised disputed territory of Jammu and Kashmir as part of India.

“Pakistan informed the SCO secretariat that India’s illegal and unilateral actions in occupied Kashmir were in grave violation of the UN Charter and UNSC resolutions on the Jammu and Kashmir dispute.”

The SCO agreed to Pakistan’s position, the statement said. The map then remained on display in SAPM Yusuf’s background during the meeting prompting Ajit Doval to walk out.

“Once again, India’s attempts to make a significant multilateral forum subject to petty bilateral debate failed and Pakistan’s new political map and the aspirations of the Kashmiri people were highlighted during the meeting of national security advisers of SCO member states,” the statement said.